Astronaut Jeremy Hansen takes a selfie with one of the participants at the Space Bound 'Day on the Hill' reception'. Credit: SpaceQ.
Share

The first Space Bound conference organized by the fledgling Space Canada industry group was an opportunity for the industry to come together, small and large, and see if they could host a meaningful event.

To succeed they needed to do more than bring together the major players. They needed small businesses, startups, academic and government participation. Overall the event was a success and does provide a path forward.

The conference was held in Ottawa between Oct. 17-19 and was made up of two parts. On the first day, a ‘Space Day on the Hill’ was organized followed by a late afternoon reception. The second and third days were for conference panels.

At a “fireside” lunch chat former astronaut and president of the Canadian Space Agency said, and he stressed, speaking as a citizen, not a member of parliament, that Canada 🇨🇦 should double its base funding over 5 years. #SpaceBound2022 pic.twitter.com/gJQjZU4a9l

In the Tweet above, former Canadian Space Agency president and astronaut, and current Member of Parliament, Marc Garneau said, and he stressed, speaking as a citizen, not a member of parliament, that Canada should double its base funding over 5 years.

The Hill and the Reception

According to Space Canada, the Day on the Hill event was sold out. From those SpaceQ spoke with it was well received and perceived as being useful. The event was designed for companies to “engage with elected officials, political staffers, and public servants involved in the space sector.”

This was followed by the Day on the Hill reception which was very well attended. In fact, Space Canada told SpaceQ that approximately 300 people attended. That was about double the amount of people that attended the conference the following two days.

Importantly, it brought together those elected officials, staffer etc. to mingle with the industry crowd and keynote speaker, astronaut Jeremy Hansen.

So who participated in the Day on the Hill event and attended the opening reception? SpaceQ recognized several notable people at the reception included former Conservative leader Erin O’Toole, Minister of Housing and Diversity and Inclusion, the Honourable Ahmed Hussen, Canadian Space Agency president Lica Campbell and host of others.

The list is long, and Space Canada did provide provide us with many names, though not all of them, who participated in the Day on the Hill and, or, attended the reception.

[Read our stories of key panels and the government Earth observation announcement.]

Other than the great crowd at the reception, the highlight was a speech by astronaut Jeremy Hansen. And Hansen didn’t disappoint. He didn’t read from a prepared remarks (I asked). And Hansen had clearly prepared what his points would be, and it was how he articulated them, especially towards the end, that really energized the crowd. I’ll let some of Jeremy’s word speak for themselves.

“Now I want to come back to you, all of you in this room. I really believe that we have tremendous capability as I’ve shown you tonight. I believe that we we have the right people in the right places. But I also believe there are many of you in this room who think space have very little to do with what you do. And you are the ones that I specifically I offer this to. Space has the potential to help you in many of the things that you do. And you have the potential as thought leaders and leaders of this country to push us in that strategic direction to leverage space and to do more.”

He then went on to tell the story of Apollo 13 and how it was nearly a disaster that could have resulted in the deaths of the three crew members. As we all know, the crew survived. And they survived in great part due to the heroic efforts of the mission control and support personnel at NASA.

What most people don’t know is that after they returned, the astronauts presented the people of mission control a gift. The gift was a mirror from the lunar lander that never made it to the surface of the Moon. Because the astronauts hadn’t been to the surface, and hadn’t collected lunar regolith as planned to bring back to Earth, the command capsule didn’t have enough mass. To fix that, they scavenged whatever they could from the lunar lander to make up the missing mass. That included a lunar lander mirror.

The crew of Apollo 13 presented the mirror to mission control. The inscription reads:

“This mirror flown Aquarius, LM-7, to the Moon April 11-17, 1970, returned by a greatful Apollo 13 crew to ‘reflect the image’ of the people in mission control who got us back! James Lovell, John Swigert, Fred Haise.

(I know I’ll get email about this, and yes, they did misspell greatful, it should be grateful.)

Hansen then said, “I didn’t have a lunar module to rip a mirror out of” but i have this one from a bike. The crowd laughs, and Hansen says, actually I bought it Canadian Tire. And more laughter.

But, he had a point to make. He wanted to take a selfie of the mirror with the crowd reflected in it. The mirror will fly with him to space when he gets his chance for a mission.

He then got the crowd to gather closer to him for the picture, including your truly. By this point he had completely charmed the crowd, and anyone in the crowd didn’t believe they had a role to play should have been won over. He thanked the crowd and then took individual or group selfies with himself and the mirror.

It’s no secret that Space Canada is advocating for that a National Space Council be created. Examples cited at the conference, in particular during the National Space Governance: Sustaining Competitive Advantage in a Competitive Global Marketplace panel, were those of the US and the UK.

Considering one of the topics was the creation of a National Space Council, the two Canadian government panelists had to remain neutral, skirting this issue by discussing existing governance rules. This they did deftly. On the other hand, Brain Gallant more than made up for the neutrality by expressing well rehearsed points. One of his points based on the question, what are the new challenges in space governance in a changing world, is that the government is facing so many challenges that it’s basically always putting out fires. In other words, there’s no planning and processes in place to identify what might be an issue and be prepared for it.

The CSA’s Mary Preville says government departments understand changes are needed and that it’s being worked on. In fact, as a result of the 2109 space strategy, the CSA moved forward with creating a new team and leads the discussion for a new inter-governmental regulatory group that includes 14 other government departments. A spokesperson for the CSA followed up on our query for more details by telling us that the CSA led team “is undertaking analysis of priority issues and conducting targeted engagement with stakeholders to gather their views.” This includes:

While this appears to be a good step forward, Space Canada is clearly arguing that it’s not enough. Gallant wasn’t the only on the panel arguing for a National Space Council. MDA’s Kevin Whale chimed in with his support. Considering his recent past experience as the former Director General and Joint Force Component Commander for Space, RCAF and Deputy Commanding General (Transformation) at Space Operations Command, United States Space Force, his voice carries weight. In fact, he said Canada should consider the creation of a National Space Council publicly in 2019.

Alex MacDonald from NASA spoke of the US experience. He said at one point that their National Space Council provides “signals” to US departments and that perhaps this would be useful to government ministers in Canada. He also said another model Canada should look at is Luxembourg.

A Conference to Build On

Space Canada clearly made an impact with its first conference. It’s something to build on. I had asked how many and who were the new members of Space Canada? That information has yet to be released. But it will be important going forward, especially if the organization is to show that it can build a base of innovative startups. And yes there were at least 10 startups in attendance who SpaceQ hadn’t even heard of. We’ll be writing about some of them in the coming months.

While this is an industry group, and participation reflected that as expected, there was very little academic participation. Hopefully Space Canada won’t be speaking just within its silo going forward.

One last note, which happened after the conference on November 2, Chandra Arya, Liberal Member of Parliament for Nepean made a statement in parliament in support of the creation a National Space Council. In a Tweet he said “My statement in parliament yesterday on @spacecanada which seeks to position Canada at the forefront of the highly strategic global New Space Economy I support their call to create a National Space Council to be chaired by the prime minister to guide space policies & investments.”

His full statement is in the video below. Whether the Prime Minister’s Office is onboard is yet to be determined. But if an MP for the governing Liberal party is calling for the creation of a National Space Council, Space Canada may yet get its wish. That would certainly show the industry group can deliver for its members.

My statement in parliament yesterday on @spacecanada which seeks to position Canada at the forefront of the highly strategic global New Space Economy
I support their call to create a National Space Council to be chaired by the prime minister to guide space policies & investments pic.twitter.com/UcpBXcKVvF

Boucher is an entrepreneur, writer, editor & publisher. He is the founder of SpaceQ Media Inc. and CEO and co-founder of SpaceRef Interactive LLC. Boucher has 20+ years working in various roles in the space industry and a total of 30 years as a technology entrepreneur including creating Maple Square, Canada's first internet directory and search engine.
@marckboucher
Previous Wyvern gets US$7 Million Seed Round Funding
Next GHGSat Launches SPECTRA to Replace PULSE 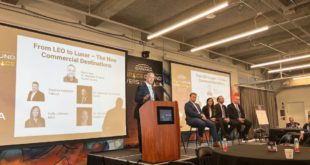 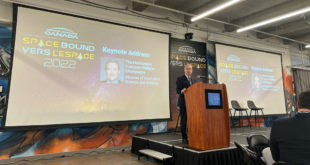