Wyvern gets US$7 Million Seed Round Funding

Edmonton based Earth observation startup Wyvern announced today that they had raised a seed round of US$7M of funding led by Uncork Capital. This brings Wyvern’s financing to date to approximately $15M.

Notably, with the new round of funding Wyvern has acquired and scheduled the launch of their first three hyperspectral satellites for the first half of 2023. In April of 2021 Wyvern had signed an agreement with AAC Clyde Space to ‘lease’ if you will, the payload space on three Clyde Space built and owned satellites.

Additional investors in this round included MaC Venture Capital and Y Combinator.

Wyvern’s funding to date has come from a variety of sources including $3M from angels, Y Combinator, and our seed round led by MaC Venture Capital, $3M from Sustainable Development Technology Canada, and $2M “from a combination of several other non-dilutive funding sources, including the Canadian Space Agency, the Government of Alberta, and the Government of Canada, bringing us up to $15M.”

Wyvern CEO Chris Robson commented on the funding saying “The funds we’ve raised go towards the launch and operation of Wyvern’s first three satellites which will provide high quality, 5 m resolution hyperspectral imagery to early adopters in early 2023. Industry leaders are seeing the opportunity and taking action, which is exciting and brings new challenges. Even at the fast rate of constellation growth we’re planning, demand will soon begin to outstrip supply and early adopters will be glad to have secured their seats.”

Wyvern is actively marketing its first service through what they’re calling the FirstLight program. The program is designed for early adopters looking to secure access to Wyvern’s high-resolution hyperspectral imaging. Wyvern also started that “the company is creating a customer sandbox to facilitate experimentation and ensure a smooth transition to making the most of insights available through the new technology and platform.”

In an email to SpaceQ, Callie Lissinna, COO and Co-Founder, told us that the FirstLight program had “signed early adopters into the program,” and that “pre-launch we are already trending towards having limited capacity for additional clients.”

Boucher is an entrepreneur, writer, editor & publisher. He is the founder of SpaceQ Media Inc. and CEO and co-founder of SpaceRef Interactive LLC. Boucher has 20+ years working in various roles in the space industry and a total of 30 years as a technology entrepreneur including creating Maple Square, Canada's first internet directory and search engine.
@marckboucher
Previous ispace HAKUTO-R Lunar Lander Launch Now Scheduled for November 22
Next First Space Bound Conference Provides a Path Forward for Industry 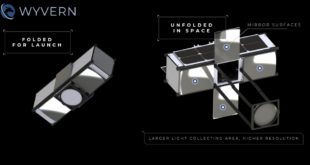 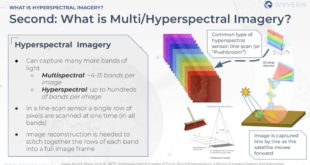 What is Hyperspectral data and what is it for?