This week the Perimeter Institute of Theoretical Physics in Waterloo is holding its first-ever alumni reunion with a new kind of physics conference providing a “big picture” overview of fundamental physics and its future. They’re calling it Convergence.

According to the Institute “physics is at a turning point. The most sophisticated experiments ever devised are decoding our universe with unprecedented clarity — from the quantum to the cosmos — and revealing a stunning simplicity that theory has yet to explain.”

“Convergence will bring together many of the world’s best minds in physics to probe the field’s most exciting ideas and chart a course for 21st century physics. The event will also celebrate, through commemorative lectures, the centenaries of two defining discoveries of the 20th century:

Noether’s theorem and Einstein’s theory of general relativity.”
The videos below are from the first day of the conference and include the complete program listed. 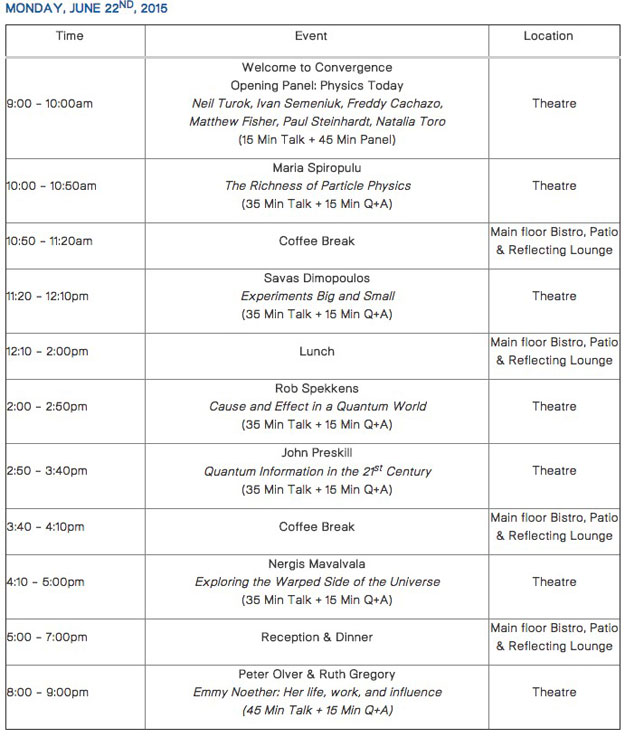 Boucher is an entrepreneur, writer, editor & publisher. He is the founder of SpaceQ Media Inc. and CEO and co-founder of SpaceRef Interactive LLC. Boucher has 20+ years working in various roles in the space industry and a total of 30 years as a technology entrepreneur including creating Maple Square, Canada's first internet directory and search engine.
@marckboucher
Previous The CSA Issues AO for the Space Technology Development Program for Industrial Capability Building Contribution
Next Video: Perimeter Institute for Theoretical Physics Convergence Conference Day 2

Shohini Ghose provides a guide to the quantum revolution