This artist's concept from an animation shows the interstellar asteroid 1I/2017 (`Oumuamua). Observations with ESO's Very Large Telescope and others have shown that this unique object is dark, reddish in colour and highly elongated. Credit: European Southern Observatory.
Share

In 2017 scientists were surprised and delighted when a mysterious object was discovered transiting out solar system in an unusual trajectory. That object was named ‘Oumuamua.

The Space Telescope Science Institute this week hosted a lecture by Dr. Amaya Moro-Martin who provided an updated on ‘Oumuamua.

On October 19, 2017, Canadian astronomer Dr. Weryk was looking through the data from the Pan-STARRS1 survey, searching for Near-Earth Objects (NEOs), when he noticed something odd.

Astronomers detect NEOs by comparing images of the same patch of sky night after night, looking for objects that have moved. They then use computer models to predict their orbits and do follow up observations to make sure the object is following the predicted path. NEOs, including asteroids, follow an elliptical orbit similar to those of planets, due to our Sun’s gravity. On October 19th, Dr. Weryk noticed that a bright object detected on October 18th was not following a usual NEO elliptical orbit.

The mystery of what this object was had just begun. And that mystery included online speculation that it was a spacecraft, an asteroid or comet. While not all the mysteries are sold with respect to ‘Oumuamua, we’ve learned a lot including that there have been other interstellar visitors similar to ‘Oumuamua. To learn more watch Dr. Amaya Moro-Martin’s lecture below which includes a panel discussion.

Boucher is an entrepreneur, writer, editor & publisher. He is the founder of SpaceQ Media Inc. and CEO and co-founder of SpaceRef Interactive LLC. Boucher has 20+ years working in various roles in the space industry and a total of 30 years as a technology entrepreneur including creating Maple Square, Canada's first internet directory and search engine.
@marckboucher
Previous Reaction Dynamics receives $1.5 million from Canadian Space Agency for rocket engine development
Next Is Canada the next Five Eyes nation to sign a Technology Safeguards Agreement with the US? 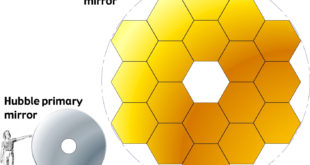 What’s the difference between the Hubble and James Webb telescopes?