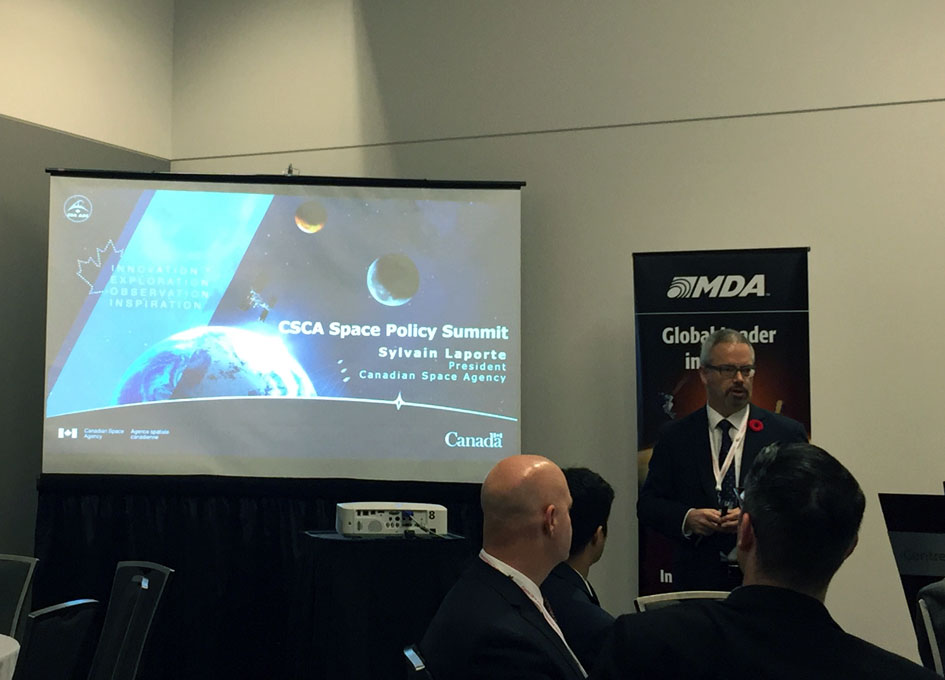 The Canadian Space Agency Perspective from the 2016 Space Policy Symposium

The Symposium was organized with an opening keynote by Canadian Space Agency (CSA) president Sylvain Laporte followed by a Space Policy and the Canadian Innovation Agenda plenary with four follow-on panel discussions. This is the first of three stories on the event.

As the first speaker at the symposium, Mr. Laporte had an attentive audience looking for some insight into current thinking at the Canadian Space Agency on the issue of space policy.

Laporte began by saying that while Minister Bains is leading the effort on the Innovation Agenda and that “space is going to be very tightly aligned with the Innovation Agenda going forward”, other government departments also have an interest in space. He mentioned in particular, climate change, developing the north, agriculture and management of resources, with space contributing to every one of these areas.

He then went on to talk about the recent Waterloo Innovation Summit which was an influential two day summit from which ISED identified three areas of action; Harness emerging technologies, engage in mission-driven research and scaling up of firms.

Key take-aways included; A need to invest in our people and skills to drive innovation, to invest and continue ground breaking technologies that address important issues such as climate change, and to leverage partnership domestically and internationally to deliver on our objectives and to gain access to new markets.

Laporte said the space sector is already well positioned and “we do quite a bit of activity in those areas already, so in terms of an alignment, you can start see there there’s a natural fit between what we are doing in space today and where the Innovation Agenda is going.”

Deloitte, one of the sponsors of the event, and in coordination with event organizers, created a report titled Escaping the low growth trap, Ideas from the 2016 Waterloo Innovation Summit which is now available.

Laporte then went to mention a quote from Minister Bains from a space event he attended that “space is at the cutting edge of innovation” to which Laporte said “here we have a Minister who truly understands the contribution of space, and truly understands the innovative nature of folks that work in space systems.”

Laporte then began a point-by-point list of examples of what the CSA has been doing and how it “resonates” with respect the Innovation Agenda.

He outlined nine points including; climate change, astronauts in space ability to do more research as Canadian robotics on the International Space Station free up astronaut time, Ontario Drive and Gear (ODG) spin-offs, M3MSat, OSIRIS-REx, CanMars 2016, New Space, technology development and the upcoming Canadian Space Agency Exploration Workshop which has the theme of Space science and space health research priorities for missions in the next decade.

It comes as no surprise that climate change is a recurring theme in Laporte’s talks. This is a clear priority for the Liberal government. It’s also clear that the government, and by extension, ISED and the CSA, will allocate resources in this area with the aim of creating innovative products which Canada can become a leader in.

One wrench in this innovation scenario is the newly elected U.S. government led by president-elect Donald J. Trump. The Trump transition team has reportedly selected Myron Ebell, a “climate-change skeptic”, according to the Washington Post, to oversee the transition at the Environmental Protection Agency.

With respect to New Space, Laporte that this segment was going to be quite impactful going forward and we’re looking at the “commercial bow wave.” This theme was echoed throughout the day.

Laporte said he had also been in discussions with the various communities and that the CSA was “looking at initiating three new scientific communities” including solar terrestrial science, atmospheric science and earth system science.

In conclusion Laporte said he was looking forward to hearing the recommendations that will come out of the Symposium and that these should be shared with ISED for inclusion in the ongoing Innovation Agenda consultations.

Afterwards, and during the course of the day, the upbeat tone portrayed by Mr. Laporte was not echoed by several participants. While Mr. Laporte’s job is to portray what steps the CSA is taking to move forward, and is listening to the community, there are some who question if ISED will act on what they’re hearing. Several participants expressed the sentiment that the space sector needs a champion in government and wonder if that will come to pass.

Space and Climate: How Space Agencies Will Contribute to the Implementation and Follow-up of the Paris Agreement during COP 21, 67th International Astronautical Congress

Boucher is an entrepreneur, writer, editor & publisher. He is the founder of SpaceQ Media Inc. and CEO and co-founder of SpaceRef Interactive LLC. Boucher has 20+ years working in various roles in the space industry and a total of 30 years as a technology entrepreneur including creating Maple Square, Canada's first internet directory and search engine.
@marckboucher
Previous What Does a Trump Government Mean for the Canadian Space Sector
Next Short Cuts: Space Policy, Earth Observation Summit, Apogy Software, Upcoming Events and More