Norsat listed on the TSX, also gets listed on the New York Stock Exchange. Credit: Norsat.
Share
Why is the sale of Norsat all of a sudden become political fodder for the opposition parties? It’s simple really, everything is political when you’re dealing with China and a Liberal government that wants to further engage China. Add in American politics, the U.S military and you’re fuelling the political fire. But is there substance to the opposition outcry regarding the deal?

The crux of the outcry is that Norsat which manufactures satellite communication components that are sold to the U.S. and other foreign military including unspecified Asian nations, is being sold to a Chinese company that may have ties to the Chinese government. There is another suitor, an American hedge fund, Privet Fund Management LLC, that started the bidding process with an unsolicited offer last September.

At this point I’ll remind readers that it wasn’t that long ago that there was also an outcry when COM DEV was being sold to another American company, Honeywell. This time around it seems ok to sell a Canadian company that manufactures some satellite communication components to a U.S. company with no outcry, but sell to the Chinese, well, watch out.

And why is it that the outcry coming only in the last few weeks? After all, Norsat announced the Hytera offer on March 27 and it was September 16 of last year that Privet made their offer. Not a word back then about yet another foreign company buying a Canadian asset with some satellite communication components that might merit a full security review.

SpaceQ spoke with sources familiar with Norsat, military security, and the security process they had to go through to get approval for the sale.

SpaceQ was told that there was only one real potential issue that could have slowed down the deal. While most of the equipment Norsat produces doesn’t warrant any security concern, they did get Wideband Global SATCOM (WGS) certification for some of their terminals including their COM15 X-Band marine VSAT terminal and the GLOBETrekker 2.0 fly-away satellite terminal. But even those components really wouldn’t have stopped the deal even if there was a full security review, according to one source.

The Norsat sale did go through an initial security review and on June 2 the company announced that “the Minister responsible for the Investment Canada Act (the “Act”) has served notice that there will be no order for review of the transaction under subsection 25.3(1) of the Act. Accordingly, this notice satisfies the Investment Canada Act condition for closing of the acquisition of Norsat by Hytera.”

Norsat sales last year were $38 million according to their financial fillings of which $18 million was a result of sales in their satellite communications operations including “delivery of satellite terminals to a major Eurasian defense contractor”. Previous sales to foreign military other than the U.S. has also occurred. The proposed deal would value Norsat at an equity value of approximately $70.6 million USD.

President Trump signalled a hard line with China when he was campaigning including when he first came to office. Then he did an about face and softened his stance. Congress on the other hand, has both supporters and detractors with respect to engagement with China.

Privet Fund Management LLC is getting broad political support in its efforts to take over Norsat. So the rhetoric you’re hearing from U.S. politicians is aimed squarely at getting Norsat into the American fold along with a shot across the Canadian bow as Canada gets closer to China.

So should Canada allow the sale to a Chinese company with possible connections to the Chinese government? It seems from the Liberal government perspective, the answer is yes.

Is it a Big Deal?

According to a source familiar with Norsat, the companies operations are relative small and its technology isn’t really a security concern. The source told SpaceQ Norsat wants to grow and it needs capital to make that happen. It sees a broader market for its wares, including other potential foreign military customers. The Hytera deal provides Norsat what it wants to realize its business plan and they seemingly are willing to sacrifice U.S. military contracts if it comes to that.

The source also said that Norsat must still comply with Canadian security regulations even if it becomes foreign owned.

The sale of Norsat is not a big business deal. It is obviously important to Norsat. But take away the political rhetoric and you simply have a company wanting to grow its business.

Tomorrow the shareholders will vote on the deal and the independent directors will vote in favour of the deal. Privet Fund, which owns 17.6% of the shares will vote against the deal. What comes next politically, if anything, is TBD.

Boucher is an entrepreneur, writer, editor & publisher. He is the founder of SpaceQ Media Inc. and CEO and co-founder of SpaceRef Interactive LLC. Boucher has 20+ years working in various roles in the space industry and a total of 30 years as a technology entrepreneur including creating Maple Square, Canada's first internet directory and search engine.
@marckboucher
Previous New Canadian Space Strategy Delayed
Next SpaceQ Podcast Episode 3 – The Space Security Index and Canada 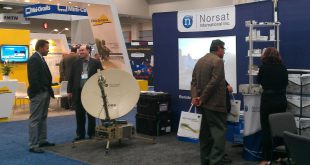