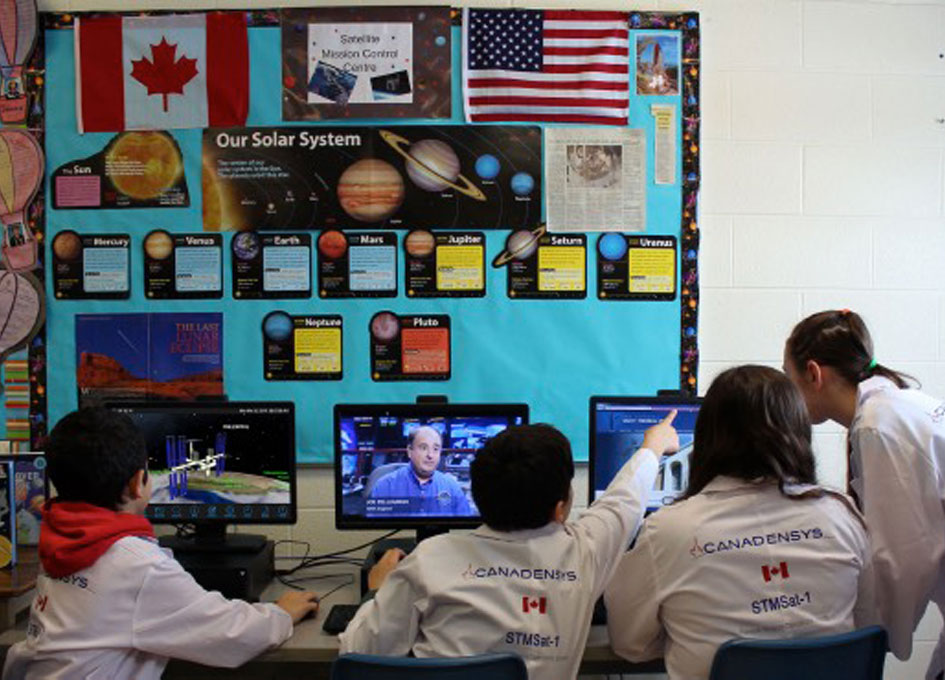 Astronaut Hansen was given an inspection tour of their RMOC by the students themselves, and addressed 700 students and teachers at the school about spaceflight and his own experiences in the Canadian astronaut corps.

Canadensys Aerospace is providing the RMOC hardware and support to the students and teachers as technical advisor for the project in Canada. Students will use the RMOC to receive images taken and transmitted by the STMSAT-1 satellite as it orbits the earth. The satellite, built by US partner school St. Thomas More Cathedral School in Arlington, Virginia, will fly in an orbit 300km above the Earth, take pictures every 30 seconds and transmit them via radio waves back to the ground. The satellite is the first ever in the world to be built and designed entirely by grade school students, supported by technical advisors from NASA.

STMSat-1 launched from the Kennedy Space Center in Florida on 6 December 2015 on an Atlas V rocket as part of a resupply mission to the International Space Station (ISS). Officials and student representatives from both schools, as well as technical advisors from Canadensys Aerospace and NASA, observed the launch of the satellite, which carried onboard the engraved signatures of every student from both of the schools. The satellite is currently on the International Space Station, where it will be deployed next month into its final orbit from a port in the Japanese module of the ISS.

Once the satellite is in its final orbit, Canadian students from ages 4 to 14 will have the opportunity to experience real-life space mission operations from tracking the satellite as it passes overhead and receiving the transmitted images, to archiving them and interpreting the data received. A key goal of STMSat-1 is the early engagement of school children in science, technology and mathematics. The project is part of Canadensys Aerospace Corporation’s commitment to Accessible Space, providing broadened participation options in space missions across public and education sectors, and leveraging the unique potential of space to inspire and engage.

“We are thrilled to be partnered with St. John Paul II School, and our American colleagues at St. Thomas More School and NASA, to provide Canadian elementary school students with the first-hand experience of a real space mission” said Christian Sallaberger, President of Canadensys Aerospace. “The visit by Astronaut Jeremy Hansen is an excellent way for the Canadian students to learn first-hand about human spaceflight, which plays a critical role in their own mission. The satellite that is carrying their engraved names has already made it safely to the ISS and been transferred from the resupply spacecraft by the space station astronauts. Next they will move it and set it up for final deployment through a port in the Japanese module. It’s a wonderful example of international cooperation and participative space.”

George Consitt, Principal of St. John Paul II School added “Our students have been eagerly anticipating the visit of Astronaut Jeremy Hansen to be able to show-off their work and the RMOC, and to hear him share some of his own experiences. They’re looking forward to the satellite launching from the space station and being able to get their first chance to receive data and images from it. As you can imagine, to describe excitement levels at the school as high would be an understatement!”

About Canadensys Aerospace
Canadensys Aerospace Corporation (Canadensys) is a space systems and services company based in Toronto, Ontario with a focus on accessible space. The company is founded on heritage and expertise from three decades of international flight programs, combined with modern commercial approaches to space program and mission development.

Boucher is an entrepreneur, writer, editor & publisher. He is the founder of SpaceQ Media Inc. and CEO and co-founder of SpaceRef Interactive LLC. Boucher has 20+ years working in various roles in the space industry and a total of 30 years as a technology entrepreneur including creating Maple Square, Canada's first internet directory and search engine.
@marckboucher
Previous Op-Ed – The 2016 Canadian Budget is a Start But Action Must Follow Words for the Space Sector
Next Canada Sets Its Gaze on the Deep-Space ‘Horizon’