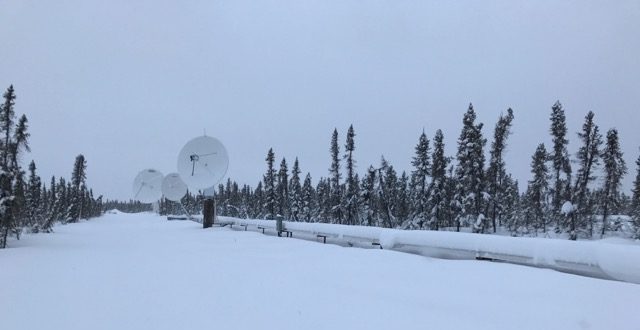 While innovation is seemingly in every funding press release issued by the government, there’s little innovation happening in Ottawa’s bureaucracy, and that’s hampering business to the point that foreign investment dollars in Canada’s space sector might head for more responsive countries. Throw in an apparent government conflict of interest, and you’ve got a Made in Ottawa bureaucratic migraine for the government.

In 2016 Canadian Satellite Ground Station Inuvik Inc. (CSGSI) began construction of privately owned ground station complex in Inuvik for Kongsberg Satellite Services (KSAT) of Norway. It turns out Canada’s northwest arctic is ideally suited for a satellite ground station complex. So much so that the government had already invested in its own facility, the Inuvik Satellite Station Facility (ISSF).

Originally KSAT was considering using the government facility. However, Tom Zubko of New North Networks told SpaceQ the terms were too onerous and costs were too high.

KSAT subsequently hired Zubko to build a new ground station facility near the government location for their needs and other clients, notably Terra Bella, at the time owned by Google, and Planet, a satellite imaging an data company which subsequently acquired Terra Bella.

It seemed that CSGSI was going to be able to attract New Space companies. The new facility was also supported by the local community and the government of the Northwest Territories which had committed to building a $100 million fibre optic line from Alberta to link to the ground station facilities and the community. The new fibre line was completed in June and is operational, unlike the CSGSI ground station which sits idle waiting for Ottawa to complete the review process.

In Canada, unlike most countries, entities that wish to operate ground stations must get licenses from two government departments, Innovation, Science and Economic Development (ISED) for the radio frequency license and Global Affairs Canada (GAC) to operate a satellite remote sensing system.

The licensing from ISED was routine and didn’t take an undue amount of time.

Unfortunately the same can’t be said of GAC. A few years ago during the Conservative government staffing at GAC was reduced, including the department that oversees applications related to ground stations.

The current Liberal government has not brought the staffing levels up to where they need to be. That finding, is part on a mandated independent review of the Remote Sensing Space Systems Act conducted by the Institute of Air and Space Law at McGill University which was completed in late February but never publicly mentioned by GAC who provided only a link to the review buried within their website. SpaceQ had an exclusive story on the review and subsequent podcast with one of the authors in which the findings were discussed at length.

The review concluded that while the “Act was appropriate and useful at the time of its enactment in 2005, the players, activities, technology and internationalization of remote sensing activities have since changed significantly and outgrown the confines of the Act.” As part of its recommendations the report states Canada should implement a new General Outer Space Act.

It’s now been over a year since GAC has had the application for the ground station complex without any resolution.

For Mike Safyan of Planet which wants to operate several dishes at the ground station, time is running out. Planet has already made other arrangements for receiving data at other ground stations globally after recently launching another 48 small satellites earlier this month and is considering not operating their dishes at the ground station facility. Safyan said “it is clear that the remote sensing regulatory system in Canada is broken and we need to see the government put some serious effort into reforming the RSSSA for the benefit of the entire space community in Canada.”

There’s more to this story.

The Remote Sensing Space Systems Act is administered by Global Affairs Canada. They in turn consult with other departments including Natural Resources Canada (NRCAN), the Departments of National Defence, Public Safety, Innovation, Science and Economic Development Canada, and the Canadian Space Agency.

SpaceQ contacted GAC with questions related to the licensing review and NRCAN’s involvement. As part of their response, GAC in turn asked if we had contacted NRCAN. In fact, we had not, but subsequently did. NRCAN told SpaceQ that our questions should be directed to GAC. Hmm.

One of the questions we asked GAC was whether NRCAN was in conflict of interest? After all, NRCAN owns and manages a competing facility.

A GAC spokesperson told SpaceQ “Global Affairs Canada licenses remote sensing space systems under the Remote Sensing Space Systems Act (RSSSA). The licensing process for these complex systems is thorough, involves consultation among multiple government agencies, and includes vital assessment of national security considerations as well as commercial issues. We cannot comment on specific applications under the Remote Sensing Space Systems Act (RSSSA), however companies often engage with us early in their project planning, so that regulatory issues can be considered throughout the planning process and so that application information is provided in a timely way. We are currently considering the results of an independent review of the RSSSA to determine how to best regulate and support the sector.”

Without getting a clear answer, we contacted GAC again for further clarification and were told by the same spokesperson, “NRCAN is one of the stakeholders being consulted in the ongoing application evaluation process.”

So clearly NRCAN as a stakeholder is reviewing the application of a competing entity. How is that not a conflict of interest?

SpaceQ asked specifically what NRCAN’s role was in the review process. GAC declined to answer that question.

Boucher is an entrepreneur, writer, editor & publisher. He is the founder of SpaceQ Media Inc. and CEO and co-founder of SpaceRef Interactive LLC. Boucher has 20+ years working in various roles in the space industry and a total of 30 years as a technology entrepreneur including creating Maple Square, Canada's first internet directory and search engine.
@marckboucher
Previous The Canadian Space Agency Issues RFP for Space Astronomy LiteBIRD Satellite Mission
Next SpaceQ Podcast Episode 6 – Catching Up On Current Events in the Canadian Space Community and the U.S. National Space Council