Astronaut Chris Hadfiled virtually visited 10 museum and science centre’s across Canada yesterday to announce a first of its kind contest in Canada by the Canadian Space Agency (CSA). The contest called the ‘Chris Hadfield World Tour Photo Challenge‘ is a photo contest for the general public.

You’re invited to take a 2D likeness of Chris, available on the CSA web site and participating centres, to wherever you travel, take a picture of yourself or the location you’re at and post the pictures on the CSA web site. You can also digitally add Chris to any of your photo’s by using the CSA’s free web tool.
The three pictures with the most votes will win a mission t-shirt signed by Chris Hadfield. The big winner will have the chance to virtually meet Chris Hadfield during a private discussion via Adobe Connect or Skype after the mission. The contest starts now runs until Chris is scheduled to land on May 16, 2013. 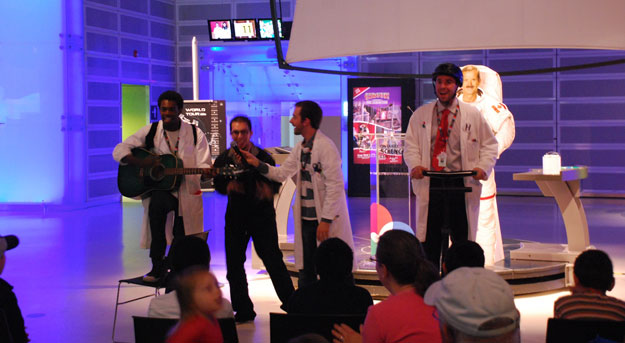 Ontario Science Centre staff educate and entertain the audience prior to Hadfield’s teleconference.
Hadfield launched the contest yesterday by participating in a teleconference. Hadfield was in Star City, Russia and had just completed his final exam, a difficult four hour exam, which he passed, as part of his training for his six month mission to the International Space Station slated to start when he launches on December 5th on a Soyuz rocket from Kazakhstan.
Spending about 15 minutes virtually at each location, Hadfield introduced the contest and then took questions from the audience which consisted mostly of students and young children. However before Hadfield took questions he talked about what motivated him to become an astronaut. He said he had “been dreaming of this (going into space) since he was nine years old” and that he made the decision to become an astronaut when he saw Neil Armstrong and Buzz Aldrin land on the moon. 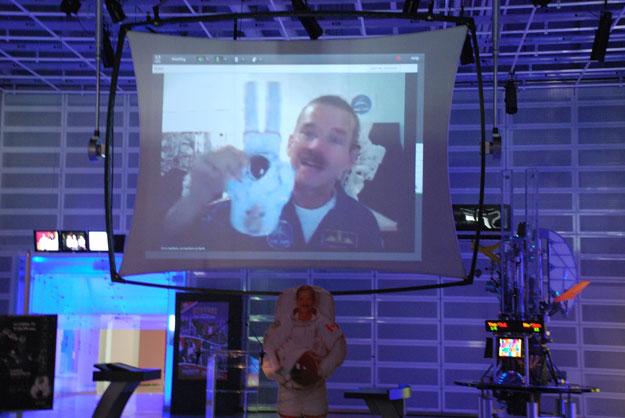 Hafield shows his 2D self to the audience.
At the Ontario Science Centre in Toronto Hadfield answered a handful of questions including what was his favourite thing to look at in space? To which Hadfiled answered the northern and southern lights. He said the experience from space in seeing the lights is very different than on Earth. He described the lights as “coming up at you, you feel like the world is alive and it’s pouring colors, greens, reds, oranges and yellows, it’s pouring these colors up at under your feet, like a kaleidoscope pillow, like someone has an amazing laser light show.”
A young girl, Lucy, asked Hadfield was his favourite planet was. He smiled and said his favourite planet was Earth “of course”, but then said if he was to go to another planet it would be Mars as it has water, an atmosphere and it is a place we could just barely live. 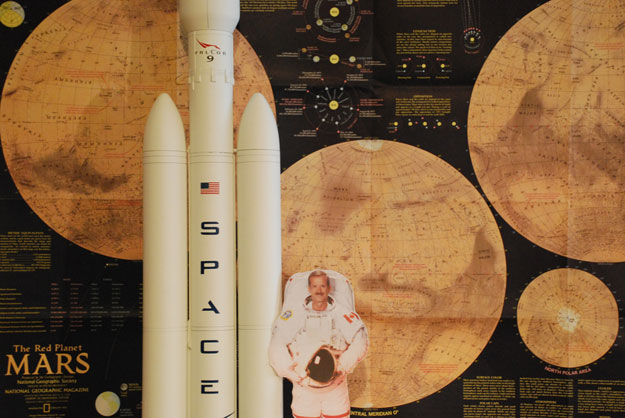 An example of photo which could be submitted. Hadfield and his rocket getting ready to head to Mars.
Below is a video of the event where Hadfield’s introduces the contest and answers questions from the audience.
– Also visit the SpaceRef Chris Hadfield Expedition 34 and 35 special year long feature.

Boucher is an entrepreneur, writer, editor & publisher. He is the founder of SpaceQ Media Inc. and CEO and co-founder of SpaceRef Interactive LLC. Boucher has 20+ years working in various roles in the space industry and a total of 30 years as a technology entrepreneur including creating Maple Square, Canada's first internet directory and search engine.
@marckboucher
Previous Venus Thrills Canadians and Millions of People Around the Earth
Next Is There a Future for Space-Based Solar Power?