Working together – Themistocles, John Kennedy and Me

As some of you may know I recently started a podcast called Terranauts. I like to say that the purpose of the podcast is tell stories about people who work in space without ever leaving the ground. Hence the name.

The idea for Terranauts came from my experience talking to people about what I do and what I have done in my career. I find that when I start talking about things like working in Mission Control, or the Shuttle-MIR program, or the early days of planning the International Space Station, people listen. They lean in. At parties and family gatherings, they stop their other conversations and listen to the stories about working in space. They want to know what it was to be have been a part of something big, challenging, and exceptional. They want to know what it was like to Be There.

There is a basic human need to be a part of something bigger than ourselves. It’s what I call “The Attractive Power of the Big Idea”. And it’s part of why we need to continue to work in and from space. The title of this piece comes from a talk I used to give that was called “Themistocles and Space Program”. In that talk I compared the Greek politician Themistocles to US President John F Kennedy. At an assembly in 493 BC, Themistocles spoke to his fellow Athenians and convinced them to do something no one else had ever done. They new that it would require a large amount of both communal and private resources and significant personal sacrifice by many of those present. But they agreed. They agreed to build the largest navy that their world had ever seen. At one stroke they decided to become not only a maritime nation, but the predominant maritime power of their time. Ultimately, it saved their city when, three years later the massive Persian empire invaded Greece. The navy the agreed to create that day became the “wooden walls” that saved Athens.

But they did not know any of that on that day. But still Themistocles convinced them. How? We don’t know, but I think he must have sounded a lot like President Kennedy when exhorted his fellow Americans to go to the moon and “do those other things, not because they are easy but because they are hard”. Like Kennedy, I think Themistocles appealed to his fellow Athenians desired to join together to go somewhere they had never been before. A place that they could only go if they agreed to go together. Even though those speeches were given almost 2500 years apart, I believe they both appealed to that same basic human need – to do big things, and to do them together.

I think this is part of our tribal nature. Our deep-seated certainty that we need to be a part of a group to survive. It’s, literally, in our DNA. For most of us, thankfully, this need is no longer a survival mechanism. But I am convinced that it is at the root of a lot of human behaviour. Everything from rooting for the home team to why we form and support political parties. Obviously there are times when this instinctual behaviour continues to serve us well. But, there are clearly times when it does not – to say the least.

So … I start talking about things like working in Mission Control on the space shuttle program, or helping figure out how to assemble the International Space Station, or attending the “Chicken Cannon” test where NASA confirmed that, yes, foam insulation could put a hole in the space shuttle.

Editor’s note: This is the first regular column by Iain Christie. We also have two other columnists starting shortly.

Founder and CEO at SideKickSixtyFive Consulting and host of the Terranauts podcast. Iain is a seasoned business executive with deep understanding of the space business and government procurement policy. Iain worked for 22 years at Neptec including as CEO. He was a VP at the Aerospace Industries Association of Canada, is a mentor at the Creative Destruction Lab and a visiting professor at the University of Ottawa's Telfer School of Management.
Previous Export Development Canada on managing the impact on global supply chains
Next Canadian Space Agency working in an evolving COVID-19 situation 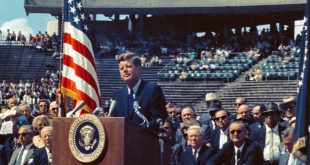 Themistocles and Kennedy – The Power of the Big Idea