After the flight Bob Smith, CEO of Blue Origin said in a statement “at Blue Origin, we are motivated by the dreamers that inspire us and the builders who turn those dreams into reality. Today’s crew represented both dreamers and builders. We had the honor of flying our very own Audrey Powers, Vice President of New Shepard Operations, who fulfilled a lifelong dream to go to space and has been an integral part of building New Shepard. Our two customers, Chris Boshuizen and Glen de Vries, have built their own successful ventures and have now realized their own dreams of space travel. And, as everyone knows, William Shatner has played an important role in describing and imagining the wonders of universe and inspired many of us to pursue a career in the space industry. This flight was another step forward in flying astronauts safely and often. It’s an incredible team and we are just getting started.”

Upon returning from their short flight, just over 10 minutes in duration, Shatner was visibly emotional after emerging from the New Shepard spacecraft. He spent a short time on his own and was then approached by Blue Origin owner Jeff Bezos who congratulated him on the flight. At this point Shatner spent several minutes detailing to Bezos his flight and the emotions it stirred in in. He spoke of the overview effect but was truly amazed at how thin our atmosphere appeared as he reached space. He could be heard telling Bezos that this flight is something that everyone in the world should experience.

Watch a replay of the New Shepard NS-18 mission

Boucher is an entrepreneur, writer, editor & publisher. He is the founder of SpaceQ Media Inc. and CEO and co-founder of SpaceRef Interactive LLC. Boucher has 20+ years working in various roles in the space industry and a total of 30 years as a technology entrepreneur including creating Maple Square, Canada's first internet directory and search engine.
@marckboucher
Previous CSA issues rover motion tracking system tender
Next Lucy spacecraft’s Trojan journey is only the next step 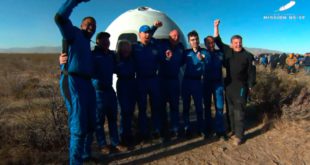