The RADARSAT Constellation Mission is Ready for Launch

The launch of the RADARSAT Constellation Mission passed yet another milestone this past Saturday when SpaceX conducted a successful static fire test of the SpaceX Falcon 9 first stage on the launch pad.

This morning the US Air Force officially confirmed the launch and warned local residents of possible sonic booms.  The sonic booms would be as a result of SpaceX attempting to land the first stage of the Falcon 9 rocket on land at Landing Zone 4, previously called SLC-4W.

In a statement released to media the Air Force said “local residents may see the first stage of the Falcon 9 returning to Vandenberg AFB, including multiple engine burns associated with the landing. During the landing attempt, residents from Santa Barbara, Ventura and San Luis Obispo counties may hear one or more sonic booms. A sonic boom is the sound associated with the shock waves from an aircraft or vehicle traveling faster than the speed of sound. Sonic booms generate a sound similar to an explosion or a clap of thunder. The sonic boom experienced will depend on weather conditions and other factors.”

This morning Maxar, the parent company of MDA, the prime contractor for the RADARSAT Constellation Mission released the image above that shows the launch site with the SpaceX Falcon 9 at the pad. To the left you’ll see the large SpaceX logo, that spot is Landing Zone 4 where the Falcon 9 first stage is scheduled to return after completing its mission.

Here is the launch sequence. Just over an hour after launch the last of the RADARSAT Constellation Mission satellites should have deployed. 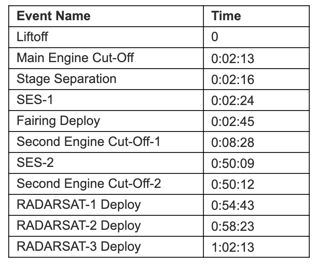 After years of hard work and dedication, Canada’s RADARSAT Constellation Mission is ready for launch. Today’s static fire test by @SpaceX confirms the launch is a ‘go’ for Wednesday, June 12 at 7:17am PT. Great job team! #RCMSatellites #CdnSpace pic.twitter.com/2IxGUtihJR

Boucher is an entrepreneur, writer, editor & publisher. He is the founder of SpaceQ Media Inc. and CEO and co-founder of SpaceRef Interactive LLC. Boucher has 20+ years working in various roles in the space industry and a total of 30 years as a technology entrepreneur including creating Maple Square, Canada's first internet directory and search engine.
@marckboucher
Previous Creative Destruction Lab Set to Graduate 13 Companies in First Space Stream
Next How Will Agriculture and Agri-Food Canada Use the RADARSAT Constellation Mission Data?