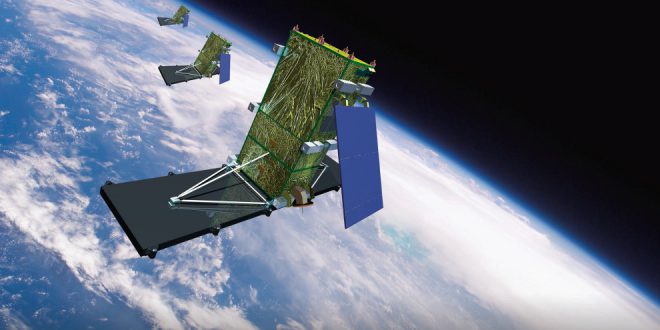 The Canadian Space Agency (CSA) has announced a research and development opportunity that is targeted at developers to encourage development of applications that integrate data from multiple earth observation (EO) satellites.

Based on the text of the announcement of opportunity (AO), it seems likely more than one project will be funded, but the total number of funded projects depends on available funds.

According to the CSA, this AO is a result of advances in technology, specifically these two trends;

The AO also states as justification for the funding;

“In order to stand out among the growing population of missions, it is necessary for the satellites to have exceptional operating characteristics and a dedicated user base, as in the case of Canada’s RADARSAT program. There is an increasingly demonstrated trend for incorporating multiple satellite sources into more complex applications. For example, several applications in recent years have been shown to benefit significantly from the use of both optical and Synthetic Aperture Radar (SAR) imagery as complementary to one another. It is expected that this trend for favoring multiple types of satellite coverage will grow in the future, presenting unique and difficult challenges in the processing and use of the data.”

The AO also states that;

“In parallel to the progress in EO missions has been the explosion of other data types in the form of M2M technologies, along with the storage and processing capabilities in cloud computing and Big Data. Much of the technology is interconnected. In the case of traditional EO applications, there is growing use of interconnected in situ devices with EO imagery with a variety of multivariate data sources. This trend is only going to grow further in the future.”

There are several companies working in this space in Canada that come to mind that could be interested in this opportunity including UrtheCast, SkyWatch, Kepler Communications, Helios Wire and others.

Boucher is an entrepreneur, writer, editor & publisher. He is the founder of SpaceQ Media Inc. and CEO and co-founder of SpaceRef Interactive LLC. Boucher has 20+ years working in various roles in the space industry and a total of 30 years as a technology entrepreneur including creating Maple Square, Canada's first internet directory and search engine.
@marckboucher
Previous Podcast Episode 15: Matt Bamsey Talks Safe Food Production in Space
Next The Moon is Almost Open for Business