This photo, taken in September 1962, shows John H. Chapman, the man considered the pioneer of the Canadian Space Program. He played a key role in the scientific programs for Alouette 1 and ISIS. In the background is a Thor-Agena rocket, about to launch Alouette 1 in space. Credit: Communications Research Center Canada (CRC).
Share

This is the first part of a week long series. It is SpaceQ’s hope that it will provide the background information for those who wish to better understand how Canada’s space program has evolved from a strategic perspective.

How many Long Term Space Plans (LTSP) have there been? And importantly, what’s in them, and what relevance do they have today? These are some of the questions we will answer in this series. And if you think defining what documents are considered Canada’s Long Term Space Plans is straight forward, you’re in for a surprise.

Today though, the document being presented can be considered the founding plan for Canada’s space program, and the precursor to the first Long Term Space Plan (LTSP1). 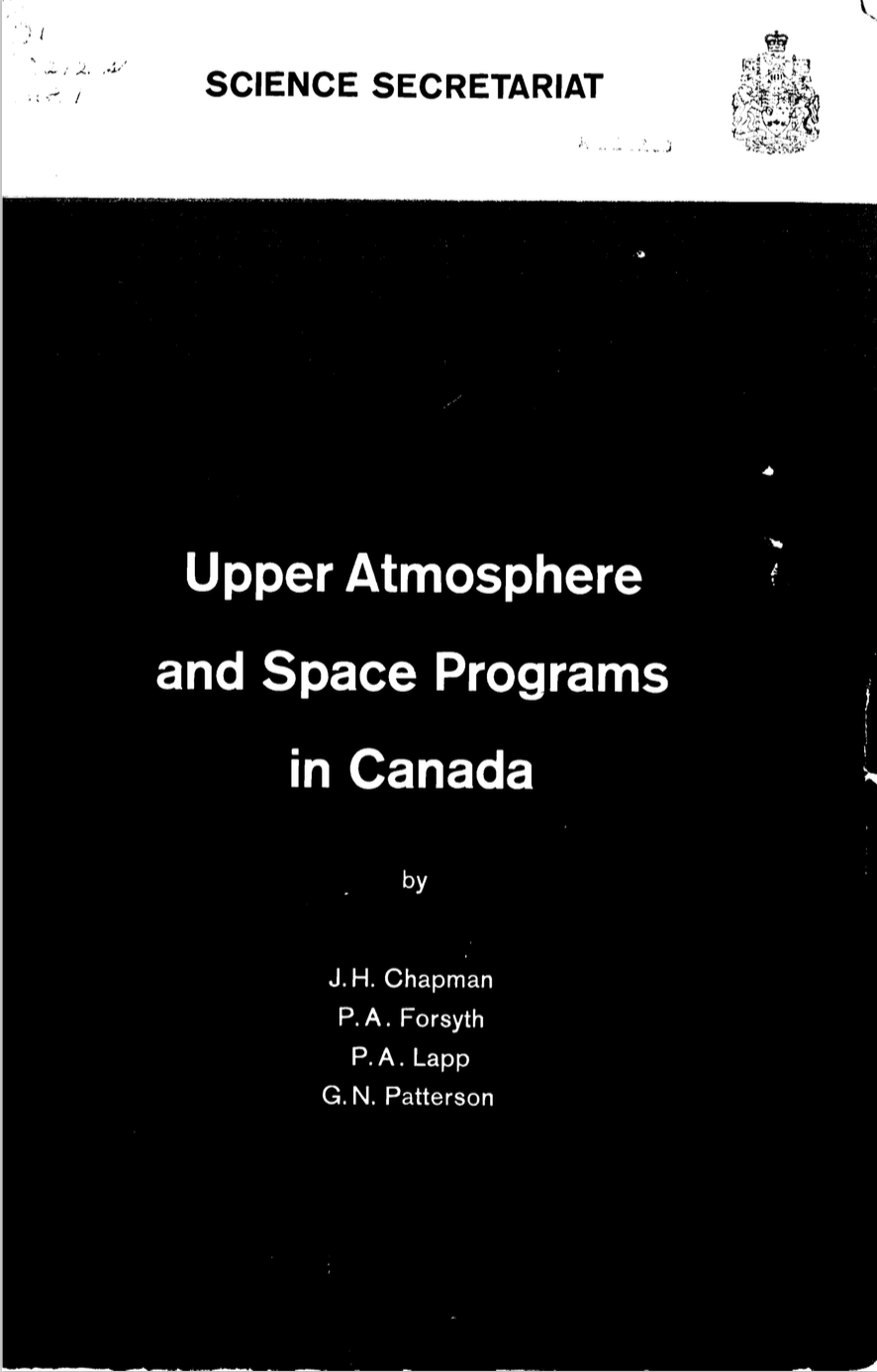 In 1967 the Science Secretariat of the Privy Council Office, which supports the Prime Minister and Cabinet, commissioned Special Study No 1 with the title Upper Atmosphere and Space Programs in Canada, and which would become known as the Chapman Report.

It is the defining document that would shape Canada’s early space program in the late 60’s and 70’s. The Canadian Space Agency would not come into existence until March 1, 1989.

You can download the Upper Atmosphere and Space Programs in Canada, Special Study No 1, which is 267 pages in length, here.

The authors of the report were: John H. Chapman, Peter A. Forsyth, Philip A. Lapp and Gordon N. Patterson.

The recommendations listed below would lead to the eventual founding of the Canadian Space Agency.

A recurring theme within the recommendations is a discussion of domestic launch capability. In particular the report states “The domestic need for launch vehicles and space hardware is growing. Developments of this nature in other countries are fully sup­ported by government on military or other grounds.” The recommendations related to this never led to a domestic orbital launch capability, something that some would argue is needed now more than ever.

Recommendations from Special Study No 1

Application of space technology to specific Canadian needs should be the central theme of the program. Canada needs satellites for TV and telephone services to the north, for augmenting communica­tions east and west, for surveying natural resources, for surveillance of weather, spotting forest fires and ice in shipping lanes and for many other purposes. The prime objective for space technology in Canada is its application to telecommunications and survey problems of a large sparsely settled country.

Secondly, the upper atmosphere over Canada is like that over no other country, with northern lights, ionospheric storms, and a magnetic field which trails away from the sun nearly to the moon’s orbit. The weather over much of North America is triggered by events in the denser atmosphere over Canada, but some phenomena occur at heights where only rockets or satellites can make measurements. Research in the laboratory, at rocket ranges, from the ground or from satellites is in our own interest, and a duty to others in the world affected by our atmosphere. The second objective for a Canadian space program is the study of the unique atmosphere high over Canada.

The field of space activities should, in Canada, include all activities directly associated with rockets and other launch vehicles, with spacecraft, and with those ground-eased activities which relate directly to upper-atmosphere and space phenomena. The space pro­ gram is separate and distinct from aeronautics in Canada.

The absence of a national mission-oriented agency with overall responsibility for upper-atmosphere and space activities in Canada has resulted in fragmented programs, divided responsibility, and seri­ous omissions in planning. These deficiencies are bound to become more serious in the future, and could lead to tragic consequences for Canada in loss of technological opportunity, and in gradual erosion of national control over natural resources and domestic communica­tions.

Therefore we recommend:
(a) the establishment of a national advisory committee on space research and development.

It should be pointed out that this function cannot be filled by the NRC (National Research Council) Associate Committee on Space Research, unless the author­ity of the Committee is radically altered and enlarged.

(b) the establishment of a central co-ordinating and contracting agency for space research and development.

This agency would assume financial responsibility for some of the existing programs, but would contract authority back to the agen­cies and departments which now direct these programs, at least for the present. It is not envisaged that the central agency would estab­lish laboratory facilities where these exist or can be established in industry or universities. In due course there might be some consolida­tion of existing Government laboratories in the space area.

(c) the establishment of impartial procedures for the selection of rocket and satellite experiments.

These procedures are necessary to provide uniformity of oppor­tunity for scientists in Government, university and industry.

Canada will, within the next decade, need to launch small scien­tific satellites at a rate which will justify supply from Canadian sources.

(a) the initiation of a design and cost study for a small-satellite launch vehicle and related facilities for Canadian use.

Canada will require a continuous series of launches of communications satellites into synchronous orbit, to establish and maintain a telecommunications system for domestic Canadian use.

(b) the negotiation of purchase of launching services for synchronous orbit communications satellites on terms which will ensure continuing Canadian specification and control of domestic communications.

All major facilities such as launch ranges, launch vehicles, test facilities, data acquisition and processing facilities must be considered as national investments, neither to be duplicated unneces­sarily on the one hand nor to be built inadequately on the other.

(a) that major investments in space facilities should not be undertaken without reference to the overall space program.

The use by Canada of CRR (Churchill Research Range) is expected to grow nearer to parity with the US and the present joint agreement is potentially restrictive on Canadian use of CRR.

(b) that when the agreement covering CRR expires on 30 June 1970 it should be re-negotiated on the basis of complete Canadian control with ‘Specific provision for launching US rockets on a reimburs­able basis.

(a) that steps be taken to ensure continuing Canadian control of domestic communications.

(b) that, while it may be necessary to purchase launch services for synchronous satellites, Government policy on use of telecommuni­cations satellites for domestic communications be developed so as to ensure Canadian control and maximum use of Canadian capabilities for the development and manufacture of both space and ground com­ponents of the various systems.

(c) that Canadian rights to station satellites in synchronous orbit locations between 75°W and 115° W longitude be established by international agreement and taken up by occupation within a reason­ able time.

The present international assignment of radio frequencies is unsatisfactory to Canada on several accounts, and no provision of frequencies has yet been made to anticipate direct broadcast to home receivers from communications satellites.

(d) that consideration be given to reassignment by ITU (International Telecommunications Union) of fre­quencies for communications satellites to increase the bandwidth available, to remove the limitations due to interference with the pres­ent radio-relay services in Canada, and to provide frequencies for direct TV broadcast from satellites.

The domestic need for launch vehicles and space hardware is growing. Developments of this nature in other countries are fully sup­ported by government on military or other grounds.

(a) that industrially based, study and research and development programs, fully funded, be undertaken on launch-vehicle systems and components to meet Canadian needs.

(b) that systems management and prime contract activities be awarded to Canadian industry for the development and supply of the major hardware portions of the Canadian space program.

Complete self-sufficiency within Canada for the supply of space hardware is not expected within the foreseeable future. Extensive pur­chases will therefore have to be made from other countries. We need to achieve a balance of payments on this account and to promote ex­port opportunities for Canadian industry, similar to the existing defence production and development-sharing agreements.

(c) the negotiation with other countries of development and production sharing arrangements in the space field.

We anticipate that space programs can initiate innovations in a wide range of technology. One purpose of supporting space research and development is to generate new processes and products of value primarily to industries outside the space area.

(d) the initiation of a program to establish and implement the best way to channel the technology derived from the space program into other areas for maximum benefit to the country.

There is an increasing need for university institutes to establish extensive research facilities for research and graduate training ~ a group of staff and students. The effectiveness of a university research group also increases much more rapidly than the numerical increase in staff once a critical size is reached which permits staff members to assist one another in different phases of their research. Furthermore, a large enough group to provide for several rocket launches a year is needed to reduce the hazard of graduate research on space vehicles, or to handle the experiments in satellites. These institutes and university research groups will represent an increas­ingly important element of the total national resources in space re­ search and development.

The integration of the programs of university space institutes and research groups into a national space program, consistent with the role of these institutes and groups as centers of research and ad­vanced education, and that they be properly funded to contribute ef­fectively and efficiently.

There is no identifiable theme in the present space-research activities of life scientists in Canada, but excellent work is going on in unrelated areas, some of which has direct relevance to manned space flight, studies of life possibilities on other planets, and so on. Canadian life scientists should have an opportunity for direct participation in space experiments, in anticipation of the eventual development of programs requiring Canadian competence.

That Canadian life scientists be encouraged to participate direct­ly in space programs in Canada or to co-operate in foreign programs.

Boucher is an entrepreneur, writer, editor & publisher. He is the founder of SpaceQ Media Inc. and CEO and co-founder of SpaceRef Interactive LLC. Boucher has 20+ years working in various roles in the space industry and a total of 30 years as a technology entrepreneur including creating Maple Square, Canada's first internet directory and search engine.
@marckboucher
Previous David Saint-Jacques to Wear Smart Shirt to Monitor His Health
Next The Early 1980’s: What’s in Canada’s Long Term Space Plans? Part 2