The Montreal Student Space Associations have come together to launch the first Montreal Space Symposium and the event is already out of tickets with 500 people registered. That’s impressive for a new student led event, even if the tickets are free.

Headlining the speaker list is the president of the Canadian Space Agency, Sylvain Laporte.

In their owns “the Montreal Space Symposium (MSS) will be a public conference to discuss, address, and plan for the future of space in Montreal and Canada. MSS will showcase a plethora of recent contributions and advancements in the Canadian space industry and Canadian space research.”

The event itself is the brainchild of several individuals from 12 aerospace associations coming from McGill University, Concordia University and the Université de Montréal and will take place October 5th and 6th at the Palais des Congrès.

One of those organizers is Jan Clarence Dee, a recent graduate of Concordia University who now works as a Junior Systems Engineer at the Canadian Space Agency.

Dee told SpaceQ that the 500 people registered for the event are mostly student, about 80%. This shows the incredible interest space holds with the Montreal student community. All signed up before the speaker list was even published. The rest of the participants are educators, industry and the public.

SpaceQ will sit down with the organizers of the symposium at the event to get the story behind the creation of Montreal’s newest space conference.

With respect to the speakers, there are about 45 scheduled to talk over the course of the 2 day event, in concurrent tracks.

About half the speakers are either students or come from academia, while the balance are from industry and a good size contingent from the Canadian Space Agency.

The event takes place during World Space Week and if successful, which seems likely, Dee says “we want to do this again next year, but much bigger and so we can accept more people.”

Boucher is an entrepreneur, writer, editor & publisher. He is the founder of SpaceQ Media Inc. and CEO and co-founder of SpaceRef Interactive LLC. Boucher has 20+ years working in various roles in the space industry and a total of 30 years as a technology entrepreneur including creating Maple Square, Canada's first internet directory and search engine.
@marckboucher
Previous Podcast Episode 14: Ewan Reid, Mission Control Space Services
Next Exclusive: Canadensys is Expanding its Operations Opening an Advanced Manufacturing Facility in Waterloo 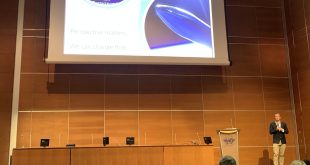