Toronto’s Kepler Communications announced on Thursday that they have signed a contract to test their ÆTHER in-space communications network with Spire Global, a “leading global provider of space-based data, analytics, and space services.”

Spire will be hosting Kepler’s ÆTHER terminal aboard an upcoming Spire nanosat that will be launching in late 2022, shortly following ÆTHER testing on two of Kepler’s own satellites next year.

ÆTHER is Kepler’s move to resolve a key issue with low-earth-orbit (LEO) satellite operations: intermittent access to ground stations from space, especially with satellites aimed at connection with Internet of Things (IoT) devices. The ÆTHER network is intended to resolve that by adding small hardware devices to smallsats and nanosats that will connect to Kepler’s own LEO satellite constellation, which will then pass the signal on to ground stations. This will create, according to Kepler, “always-on, real-time connectivity to space-based assets.”

This follows Kepler getting a €500,000 ESA contract to “deliver hardware terminals capable of connecting other space assets to Kepler’s LEO communications network” (ie ÆTHER) to the ESA and other third parties participating in the program. It also follows Kepler’s successful Series B round, led by Tribe Capital, which raised over US$60 million in funding.

Kepler’s LEO constellation has 15 satellites in polar LEO now out of a planned 140-satellite constellation, which are (according to Kepler’s promotional material) some of the first commercial Ku-band LEO satellites in orbit. Kepler currently offers two services: the Global Data Service that allows data transfer “to and from any point on the globe”, and EverywhereIoT, which provides bidirectional data for terrestrial IoT devices.  In a podcast interview with SpaceQ publisher Marc Boucher, Kepler CEO Mina Mitry said that their team can output “ten satellites per month” in their downtown Toronto manufacturing facility.

Spire Global’s constellation of over 110 CubeSats are used primarily for Earth observation: tracking weather, sea vessels, and aircraft. They are investigating the use of networks like ÆTHER for managing their own data collection efforts, with Jeroen Cappaert, Chief Technology Officer and co-founder of Spire, saying that they “are always on the lookout for products and technologies that enhance our ability to deliver highly impactful data to our customers in a timely manner.”

Kepler CEO Mitry said that “This initiative with Spire is an early validation of the value and importance of the ÆTHER program for Kepler. Spire is a recognized pioneer in the market and understands the advantage of improving communications with their space assets. We look forward to demonstrating our capabilities with them and many other customers soon to be announced as we deliver on our mission of connecting the space economy.”

Kepler’s release said that more details on the launch and testing will be announced “at a later date.”

Craig started writing for SpaceQ in 2017 as their space culture reporter, shifting to Canadian business and startup reporting in 2019. He is a member of the Canadian Association of Journalists, and has a Master's Degree in International Security from the Norman Paterson School of International Affairs. He lives in Toronto.
Previous The incredible James Webb Space Telescope is encapsulated for launch next week
Next What’s the difference between the Hubble and James Webb telescopes? 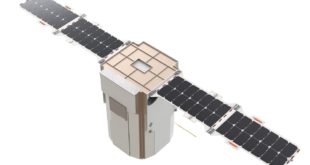