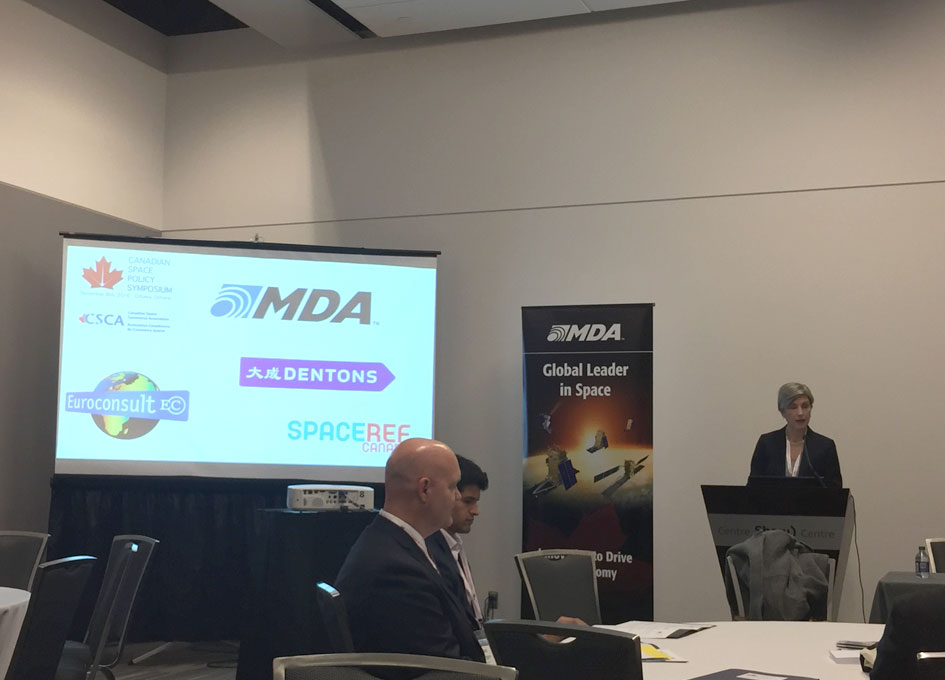 A Balanced Space Program from the 2016 Space Policy Symposium

The Symposium was organized with an opening keynote by Canadian Space Agency (CSA) president Sylvain Laporte followed by a Space Policy and the Canadian Innovation Agenda plenary with four follow-on panel discussions. This is the second of three stories on the event.

Space Policy at the Department of Innovation, Science and Economic Development
As was previously discussed in the first article in this series, the Minister of Innovation, Science and Economic Development (ISED) is leading the effort on the governments Innovation Agenda. Representing ISED at the Space Policy Symposium was Sharon Irwin, Director, Space, Marine and Defence Aerospace, Defence and Marine Branch.
Irwin outlined the Six Pillars of the Innovation Agenda and how they relate to the space sector.

Speaking about all sectors, Irwin reiterated the main points of what Minister Bains had learned through consultations since the summer. This included a need for more people to work in Science, Technology, Engineering and Mathematics (STEM) including women, young and indigenous people. The need to support startups so that they scale up and become globally competitive. The need to provide the right financial mechanisms to support small and medium enterprises and the need to build on partnerships, including the European Space Agency’s (ESA) Advanced Research in Telecommunications Systems (ARTES) program, to which Canada is contributing $30 million.

Irwin went on to say that the $800 million over the next four years for Innovation Networks and Clusters that the government promised in the budget earlier this year, will be a big part of the Innovation Agenda. Presumably some of this money will be earmarked for areas that include the space sector and there appears to be a strong emphasis being put on existing and potential new clusters by the government.

In speaking about what the government will be doing directly for the space sector, Irwin said “going forward we recognize that setting Canada’s priorities for space will be necessary to help inform where to focus our efforts.” This includes creating a new Space Advisory Board, which was until recently, accepting applications from those who felt they were qualified and could contribute. The Minister will select the new advisory board based on an open transparent, merit based process. And based on Irwin’s, and what others from government have said, this advisory board will have significant influence. 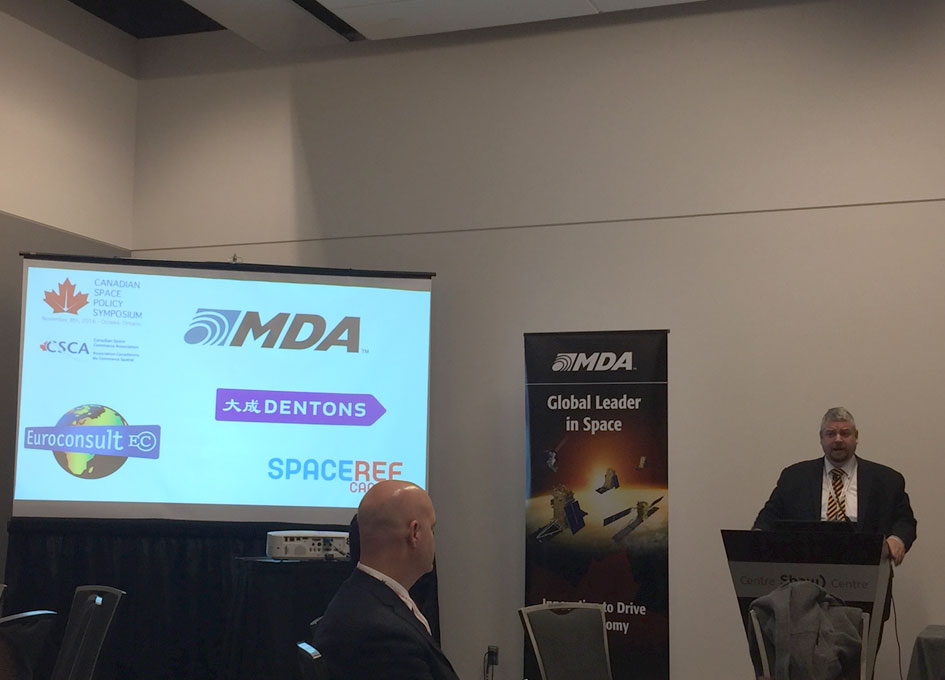 The AIAC Balanced Program
At this juncture in the Space Policy Symposium we had only heard from two government representatives who outlined positive messages, ideas and some plans that relate to the space sector. Now though was when industry and academia were about to express their thoughts on current and future space policy, and the messages on the current state of the space sector weren’t quite as positive.

Iain Christie is the Executive Vice President of the Aerospace Industries Association of Canada (AIAC) and the former CEO of Neptec. When Christie speaks to an audience you don’t need to strain to hear him. His voice is loud and clear, as is his message, and the message is that the state of the Canadian space sector is not as positive as you may think. It’s a message he, as a representative of the AIAC, has been telegraphing for some time.

The AIAC submitted their position paper, which was authored by their space committee, to the Innovation Agenda portal to which he discussed in his remarks.

The AIAC space committee outlined two basic problems that need to be addressed now and offered a possible solution.

Problem 1: For some time there hasn’t been a long term plan or vision for what Canada will be doing in space.
As Christie stated, this is not a new problem. The issue goes back over eight years when former astronaut Steve MacLean was appointed president of the Canadian Space Agency. His initial mandate was to create a new long term space plan, but when ready, was so expensive and not in-tune with the Conservative government’s fiscal plan, that it was never publicly released or acted upon.

Problem 2: Companies that rely in-part on government programs are faced with some difficult decisions as they are “rapidly running out of short term money with no new significant programs being created”, said Christie.
He goes on further to say “there is a very insidious connection between these two problems, because the first one means that companies, and in fact individuals, have to ask themselves the question about whether or not they want to continue to invest their money or their time, or their future career, in some place or sector you don’t know where it’s going. And then the first one makes them think they have to make that decision now, because there really isn’t any money. So, if we don’t correct both of those two things, then we’re going to see an even more rapid erosion, and yes, it may not always be obvious to those outside the sector, but there has been um, significant erosion of Canadian capacity over the last few years.”

He said that erosion includes investments that were not made in Canada because “other jurisdictions were assumed to be better places to put your money.” As well, highly qualified people have left the country.

This last point is a recurring theme heard by those in the community. And while it’s natural to lose some capacity, or people with desirable skill sets, to other countries, the space sector seemingly has a larger percentage of people leaving than other sectors.

In jest, Christie said “the solution is to have a long term plan and and some short term money.”

The AIAC had been asked by the government over the last several years what should be the priority with respect to the sector and technology. And after much thought, the answer was we’re not going to make “Sophie’s Choice” said Christie, referring to the 1979 movie where a woman in a concentration camp is forced to decide which of her two children will live and which will die. Christie said that “there isn’t any capacity that’s going to spare, and there’s isn’t any technology that isn’t a priority.”

The solution the AIAC came upon was a “balanced program”, meaning enough money to do programs well. Specifically, a balanced space program should consist of;

The previous government mantra of having just enough money to focus on a few niche programs is something the AIAC is not in favour of, that message was clear.

Ultimately it means the government spending more money than it is today, with the AIAC suggesting the government commit to steady spending for 10 years at least, while renewing that commitment periodically.
A couple of interesting points came up during the Q&A portion of the panel including; 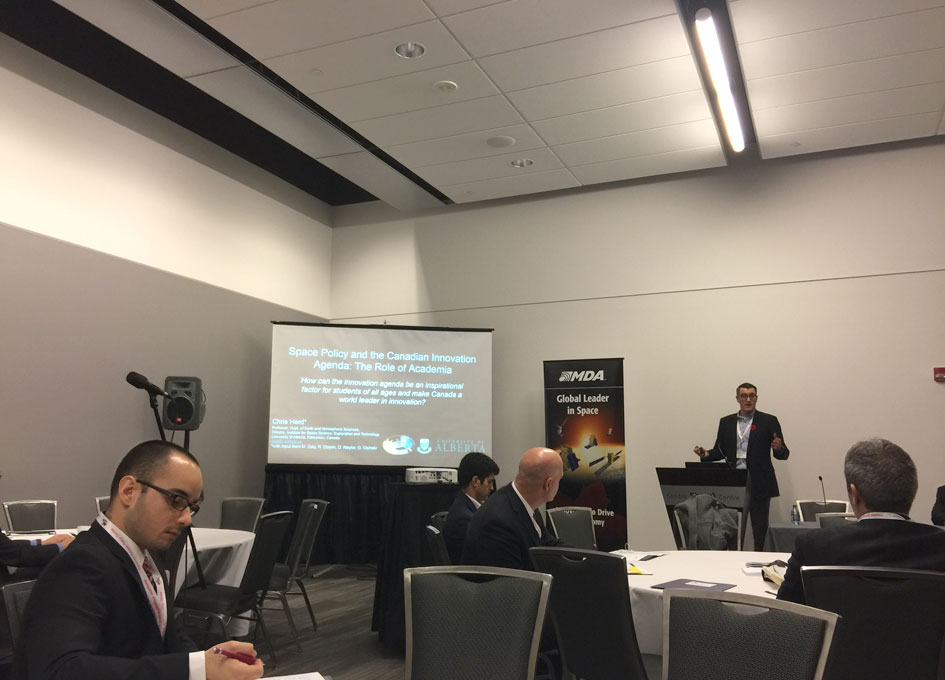 Space Innovation and Academia
Chris Herd of the University Alberta was tapped to represent academics at the opening plenary to discuss academia’s role in the Innovation Agenda. This was followed in the afternoon by an academic panel that discussed Achieving Excellence in Innovation Through Academics.

Herd formed his remarks by asking and answering the question “How can the innovation agenda be an inspirational factor for students of all ages and make Canada a world leader in innovation?” He outlined three points:

And then he expounded on these points.

With respect to Space Missions he said that “medium and large missions require the best talent from academia, industry and government; innovation is maximized when academic excellence and discovery lead to scientific payload development and partnership with/development of Canadian industrial signature development; and inspire(s) students of all ages (that) produce(s) HQP with deep knowledge of the instruments and analysis techniques.”

With respect to Space Research he said “other components (e.g. laboratory research, analogue sites) are critical to developing the fundamental research that forms the basis of space missions; and ground-based research provides opportunities for innovation. Example: curation and handling of returned samples from asteroids and other planetary bodies.

With respect to highly qualified personnel in the new space era he said (it’s) “at the core of space research, technology development and training; (is a) remarkable alignment of HQP trainees need in New Space with (~2-4 year) timescale of balloon/rocket/nanosat missions; and provide(s) agile/nimble innovation environment in which to respond quickly to new challenges.”

Tying up these point he provided two specific policy needs:

In conclusion and to directly answer the original question he had posed, “How can the innovation agenda be an inspirational factor for students of all ages and make Canada a world leader in innovation?”, he provided the following answer “By supporting world-class space research excellence and training from fundamental lab/ground to applied mission science.”

During the afternoon academic panel four challenges were discussed;

That last point mentioned by Gordon Osinski of Western University is an important one. He said three of his four PhD students who recently graduated had left Canada for jobs in the U.S. as there were no jobs for them in Canada.
If university programs are developing highly qualified personnel but graduates can’t get jobs in Canada, there’s a disconnect between what the government is trying to do and where industry and academia are.

This is an issue you would hope the Innovation Agenda will address and it goes back to what Christie said. There’s a need for a balanced sustainable space program.

Related: Part 1 in this series: The Canadian Space Agency Perspective from the 2016 Space Policy Symposium

Boucher is an entrepreneur, writer, editor & publisher. He is the founder of SpaceQ Media Inc. and CEO and co-founder of SpaceRef Interactive LLC. Boucher has 20+ years working in various roles in the space industry and a total of 30 years as a technology entrepreneur including creating Maple Square, Canada's first internet directory and search engine.
@marckboucher
Previous Details Emerge on Kepler Communications and Telesat Small Satellite Constellations
Next New Canadian Space Strategy Coming in June 2017