The first RCM satellite being transferred to the TVAC chamber at the David Florida Laboratory. Credit: Canadian Space Agency.
Share

In 2019 the Canadian space community was energized by the Government of Canada’s successful launch of the RADARSAT Constellation Mission; three satellites designed that among other things are able to help Canadians study dramatically changing climate – and such events as the breakup of massive ice sheets that have been present for thousands of years.

Launch day represented extensive and painstaking efforts of hundreds, if not thousands of individuals over a ten-year period. News releases and the scant, but positive, news coverage of the launch spoke of how RCM would provide critical data to address some of Canada’s greatest policy challenges: climate change; the need for sustainable financing to ameliorate natural disasters; monitoring of oil and gas emissions, infrastructure, agricultural management, land and marine transportation; and even national sovereignty – especially in the Arctic region.

The volumes of new data from RCM held promise for many Canadian earth observation and data entrepreneurs. This valuable data stream held opportunities for experimentation as petabytes of new data could be combined with historical earth observation data locked away in federal archives. Statistical and environmental data also held promise as Statistics Canada began to take a series of bold and visionary steps in embracing geospatial data as they began transforming Canada’s oldest and largest data agency. There was also a brief period in which a federal data strategy was to be developed and serve as critical first step in embracing “the new oil” of the modern economy.

One year later though, the optimism and hope for data success at the federal level, and specifically in relation to RCM, has given way to missed opportunity borne of hubris and short bureaucratic attention spans. The occasional two or three lines in newspaper articles on how the RCM satellite data can be used for scientific research gives us a false sense of security and belief that we are delivering on our critical mission to deliver science that can address the great challenges of our time. Some have suggested that things are in abeyance because of the COVID-19 pandemic – that federal investments are being rethought as the government pivots towards managing a global crisis. It is also important to realize that the “system rethink” mantra is a red herring.

Previous budgets dating back to 2015, committed billions of dollars in federal investment to a wide variety of policy priorities which emphasized and embraced the use of advanced technologies but fundamentally, were about providing essential data for decision making. These initiatives included a comprehensive Oceans Protection Plan, funding for a National Wildfire Strategy, Climate Change Action Plans, Indigenous peoples, revised geological mapping, and infrastructure – specifically, water, public transit, waste management and housing. These initiatives all depend on earth observation data and analysis, and one would have thought that the many additional billions of dollars that were invested in artificial intelligence, high performance computing, digital infrastructures, and broadband connectivity could have been strategically aligned to accelerate the delivery of these significant investments while simultaneously kickstarting a Canadian data revolution in support of an ambitious Canadian agenda on open data – and more importantly on open data innovation.

Aligning a massive bureaucracy, let alone one department, is at the best of times a Herculean task. Hard choices, and hard collaboration often give way to co-opting partners and engaging allies to support program decisions. The drawing of hard lines around departmental mandates and roles, and an aversion to speaking out in support of a common purpose gave way to hubris and the rapid growth of multiple technology and data silos. And, the multiplication of governance structures, mandated by central agencies, increased process while paradoxically reducing hard strategic decision making.

Within departments, these actions led public servants to do what they do best. They created senior level positions like Chief Data Officers and effectively duplicated the roles and responsibilities of Chief Information Officers and Chief Technology Officers, thus increasing red tape and process. Decades of experience in departments with international pedigrees in data acquisition, management and dissemination, artificial intelligence, machine learning, complex algorithms, and data standards gave way to hackathons, app-a-thons, the creation of accelerators and high-performance computing demonstration projects.

Few if any efforts were made to liberate the petabytes of high-quality geospatial data locked in federal archives – leaving nearly 95% percent of federal geospatial data unused at any given time. As a result, world-class earth observation and geospatial firms in Canada remain starved for high quality data from government and are pushed to work with other nation-states to unlock the data innovation potential in their data and technology.

With unprecedented deficits, one would assume that federal bean counters and timid policy leaders would realize that the data locked away in federal archives not only locked away potential tax revenues from those high paying data scientist jobs the government was so eager to attract a scant year ago, it also locked away science and innovation that could be brought to a host of policy challenges. And, as we move forward to a September budget or fall economic statement, one would assume that the senior advisors of federal earth observation would push for investments and approaches to unlock Canada’s geospatial data, and especially the data being collected by RCM. Sadly, it appears that they have instead sounded a strategic retreat.

This strategic retreat comes in the form of an engagement paper for the Canadian earth observation community that has recently been presented publicly to geospatial and remote sensing audiences. The engagement paper provides the usual homilies of such best practices as long-term planning, the need for end-to-end investment, open data, data complementarity, a whole-of-government approach, and partnerships. Written more for an internal audience of bureaucrats that know little about earth observation, it passes as thin gruel for a world class earth observation community used to seeing brilliantly articulated strategies by the European Space Agency, the UK Space Agency, NASA, India and other space and EO faring nations.

As we engage – and continue to talk – RCM will continue to gather revelatory data – it will continue to be archived, and grow the backlog. Federal scientists will continue to wait for approvals to access the data; Canadian innovations such as next generation data platforms will turn to global providers of EO data, possibly rendering Canada’s EO mission data “a nice to have” as opposed to an industry standard. Private and academic sector scientists and innovators may miss out on the ability to identify gaps in our data sensor capability and thus fail at identifying new areas of research and science. Negative impacts will accumulate into the future as students at universities across the country will miss out by not working with made-in-Canada data; exacerbating current labour market shortages of Canadian data scientists. Finally, the inability to use this data could mean that Canada – as a G7 nation – would rely on foreign data to address our national priorities.

For Canada’s space and earth observation community, it is not a time for strategic engagement or retreat; it is time for active and vocal calls for action – and immediate investment. The private sector has been integral to assisting government in responding to the COVID-19 crisis. Similarly, our industry with its history of innovation and scientific advancement can play a pivotal role in working with the Government of Canada to realize this new agenda without further delay.

President and CEO of the Global Geospatial Group, an international bespoke consultancy focused on geospatial and space-based technology, data and infrastructures. Prashant worked for 30 years in the federal government, in progressively senior roles, with the last ten as the head of the Canada Centre for Mapping and Earth Observation. Prashant also serves on a variety of science boards and acts as a strategic advisor for geospatial startups and space consultancies.
Previous Will the Canadian Space Agency have an acting president next month?
Next Veteran Canadian journalist Peter “Ray” Rakobowchuk has passed away 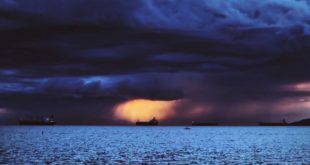