Last Thursday the X Prize Foundation announced the final entries in the Google Lunar X Prize and the lone Canadian entry was submitted and approved just before the deadline. The official roster of entered teams now stands at 29 from four continents. They are vying for a total of $30 million in prizes. To win the teams must send a robot to the Moon and then have it travel at least 500 meters and transmit video, images, and data back to the Earth.

The first team to do accomplish this will claim a $20 million Grand Prize, while the second team will earn a $5 million Prize. Teams are also eligible to win a $1 million award for stimulating diversity in the field of space exploration and as much as $4 million in bonus prizes for accomplishing additional technical tasks such as moving ten times as far, surviving the frigid lunar night, or visiting the site of a previous lunar mission.

The Canadian entry is called Plan B and the team leader is Alex Dobrianski, a software engineer with 28 years experience. Dorbianski’s two sons Andrei and Serg and friend and Chief Technical Officer, Alex Ivanov round out the Vancouver based team.
The team is heavily influenced by Boris Evseyevich Chertok who is a prominent Soviet and Russian rocket and spacecraft designer and the author of what has been called the definitive four-volume book Rockets and People, a history of the Soviet space program. Chertok advocated designing your spacecraft first, then worry about the launch vehicle afterwards, which is what Plan B intends to do.

According to Plan B they can design, develop and perform initial testing within 18 months. This would allow them an initial launch window of the spring of 2013 with their backup window set for the late 2013 or early 2014. To claim the Google Lunar X PRIZE the winning team must complete its mission before the end of the 2015.
The odds are stacked against team Plan B as several other entrants have had a few years to get their entries funded and developed. In fact it was just a few weeks ago that Astrobotic Technology Inc. signed a deal with SpaceX for a Falcon 9 launch of their entry. This is the first team to sign a launch contract and shows the maturity of the entry to be able to get to this point. Dobrianski estimates his chances of his team winning are 1:100. The reality is though the odds are much greater than that.
Dobrianski hopes his past experience working with mainframe simulations and his obsessive attention to detail and historical knowledge will give the team the necessary boosts it needs to succeed.
When asked about partnering with industry and fundraising, Dobrianski says now is not the time. His first task is to work on the technology. He also admits that industry will probably not want to partner with his team has they have adopted a Creative Commons Attribution-ShareAlike 3.0 Unported License, meaning anything they post on their web site about their project is free for others to use. Plan B won’t be filling any patents any time soon. Dobrianski says “On airbags will be a funny message – The Moon. Patents Free Zone”.
If the Duchy of Grand Fenwick can get to the moon in the book the “Mouse on the Moon”, then this small Canadian entry with little time, no money, but plenty of motivation can perhaps get there.

Boucher is an entrepreneur, writer, editor & publisher. He is the founder of SpaceQ Media Inc. and CEO and co-founder of SpaceRef Interactive LLC. Boucher has 20+ years working in various roles in the space industry and a total of 30 years as a technology entrepreneur including creating Maple Square, Canada's first internet directory and search engine.
@marckboucher
Previous NASA Releases New Video to "Reach for New Heights"
Next Shuttle Discovery Go For Launch with Canadian Experiments 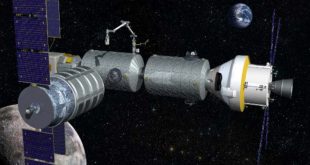