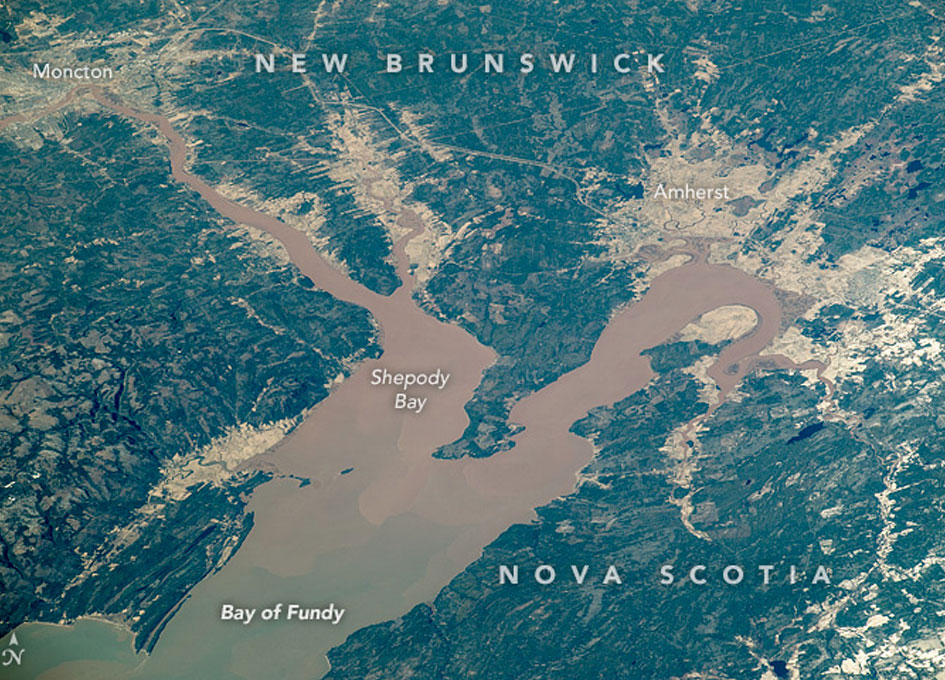 After passing over North America, a crew member aboard the International Space Station looked back at the coastline and took this photograph of one of the world’s most famous bays. The image shows the upper 54 kilometers (33 miles) of the 220 kilometer-long (140 mile) Bay of Fundy, site of the highest vertical tidal range on the planet.

The city of Moncton sits alongside the brown Petitcodiac River – also known as the Chocolate River. Other light-toned areas are agricultural fields that contrast with the dark greens of forests. The photo also shows the line of the Trans-Canada Highway, which connects two of Canada’s Maritime Provinces – New Brunswick and Nova Scotia – to the Pacific Coast.

The narrowing of the Bay of Fundy has the effect of increasing the height of the tide, such that the highest tides are measured at Shepody Bay at the inland end of Fundy. A rise of 14 meters (46 feet) is common.

Each tide transports vast amounts of water. About 2 billion cubic meters (70 billion cubic feet) flood in and ebb out twice per day. Measured in the central channel of the bay, this flow represents the power of 8,000 train engines or 25 million horses. Tidal energy for hydroelectric power generation is thus an item of keen interest in the region, but the engineering difficulties, great costs, and environmental concerns have so far prevented any development.

Astronaut photograph ISS047-E-53943 was acquired on May 10, 2016, with a Nikon D4 digital camera using a 400 millimeter lens, and is provided by the ISS Crew Earth Observations Facility and the Earth Science and Remote Sensing Unit, Johnson Space Center. The image was taken by a member of the Expedition 47 crew. The image has been cropped and enhanced to improve contrast, and lens artifacts have been removed. The International Space Station Program supports the laboratory as part of the ISS National Lab to help astronauts take pictures of Earth that will be of the greatest value to scientists and the public, and to make those images freely available on the Internet. Additional images taken by astronauts and cosmonauts can be viewed at the NASA/JSC Gateway to

Boucher is an entrepreneur, writer, editor & publisher. He is the founder of SpaceQ Media Inc. and CEO and co-founder of SpaceRef Interactive LLC. Boucher has 20+ years working in various roles in the space industry and a total of 30 years as a technology entrepreneur including creating Maple Square, Canada's first internet directory and search engine.
@marckboucher
Previous Concordia University wins satellite challenge but will their satellite ever fly?
Next Canadian Space Agency Issues RFP for a Terrestrial Snow Mass Mission Concept Study