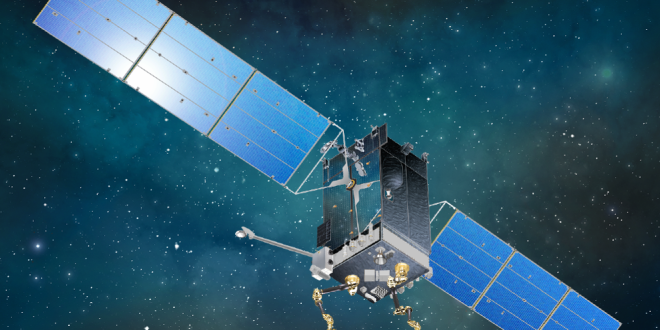 SSL and DARPA are Developing the Capability to Service Spacecraft On-Orbit. Credit: MDA.

MDA, which had announced in early May the creation of Space Infrastructure Services (SIS) to handle its nascent satellite servicing business, today announced that Finance Technology Leverage LLC would take a majority stake in SIS and that global satellite communications company SES would be its first customer.

In the May announcement MDA had stated it had hoped to be a minority stakeholder in newly created SIS, selling a majority stake to another company. With today’s announcement that goal has been achieved.

Ray Conley is the Managing Partner of FTL and now Executive Chairman of SIS. Although trained as an engineer with a Masters from MIT and having worked at Hughes Aircraft Company, Conley has spent the better part of his career as an analyst and on the financing side on new ventures.

As part of today’s announcement, SIS has awarded a contract to MDA’s U.S. division, SSL, a contract valued at US$228 million (CA$305 million).

Conley said of today’s announcement, “FTL is committed to advancing space-related industries by supporting key technologies and markets. On-orbit refueling and repairing of spacecraft is a critical step in humanity’s march toward a vibrant and exciting frontier.  We believe that SSL has assembled the world’s premier team to make SIS the leaders in this vital new arena.”

Howard L. Lance, President and CEO of SSL MDA Holdings said of the announcement, “this new venture is designed to provide satellite operators with more options in fleet management. Both commercial and government satellite operators are looking for flexibility in managing capital expenditures and better ways to incorporate resiliency into their fleets.  By combining our world-class capabilities in satellite manufacturing and robotics together, SSL MDA is uniquely positioned to enable this next-generation capability.”

According to MDA the new SIS spacecraft “will fully meet the specifications for the Defense Advanced Research Projects Agency (DARPA)’s Robotic Servicing of Geosynchronous Satellites (RSGS) program, which is designed to inspect, repair, and augment geosynchronous satellites and plans to include a refueling payload to extend the life of satellites that are low on propellant.  SSL is working with the Naval Research Laboratory, The Charles Draper Laboratory and MDA robotics divisions in Brampton, Ontario and Pasadena, CA. to develop the servicer.”

SES, a global satellite communications company,  which operates more than 50 satellites in Geostationary Earth Orbit (GEO) and 12 in Medium Earth Orbit (MEO) has signed on as the first customer.

SIS will use receive the spacecraft being developed for DARPA’s RSGS program after it has completed orbital demonstrations. That spacecraft will then be used for an initial life extension mission for SES providing refueling for at least one of its satellites.

Martin Halliwell, Chief Technology Officer of SES said “satellite servicing on orbit will be essential to next-generation architectures for communications satellites. We are pleased to be working on a refueling mission that may enable us to get more value out of satellites already on orbit.  Refueling will be relatively quick and we will be able to maintain control of our spacecraft at all times.”

Boucher is an entrepreneur, writer, editor & publisher. He is the founder of SpaceQ Media Inc. and CEO and co-founder of SpaceRef Interactive LLC. Boucher has 20+ years working in various roles in the space industry and a total of 30 years as a technology entrepreneur including creating Maple Square, Canada's first internet directory and search engine.
@marckboucher
Previous Norsat Shareholders Approve Sale to Hytera
Next On Canada’s 150th Birthday the Prime Minister will Announce Canada’s Next Two Astronauts