After being delayed for nine days the first support staff and crew have made it to the NASA Haughton-Mars Project and Mars Society base camp. The base camp is located right next to Haughton Crater on Devon Island in Canada’s high Arctic.

Weather in the arctic is always an issue. This year the snow melt was a little latter than usual. Combine that with fog, rain, wind and snow and you can understand why these intrepid explorers need to have patience. Of course a journey to Mars would take at least six months.

The first reports to reach “Earth” indicate that at least four plane loads of people and cargo made it to base camp. The next step will be to get base camp setup. Most of the people who made it in will spend the next two days getting camp ready for the rest of researchers who will come in over the next month and half. A couple of support staff will go directly to the Flashline Mars Arctic Research Station (FMARS) and get it ready for the first crew occupation which should start by Friday.

Once camp and the FMARS are ready the simulations will begin. Crews of six people will rotate about every nine days. Geologists, biologists, engineers, doctors and other scientists will be learning what it’s like to live and work around a Mars habitat environment. When the crews go on EVA, extra vehicular activity, they’ll wear simulated spacesuits. The spacesuits are really only meant to simulate the cumbersome aspects of working in a suit. The only technology on the suit that may be designed for a real Mars mission is the communication and computer gear attached to the suits.

You’ll be able to follow what’s going on everyday with our focus on special “Mars on Earth”. SpaceRef is providing three webcams to the project this year. One will be outdoors focused on the FMARS habitat while two others will be in the habitat.

I’ll be providing some insight into this project as it progresses this year. I had the privilege of spending 50 days last summer working on the project in the high arctic and was a member of the first crew. I’ve also been involved directly with crew selections this year as I’m a member of the Flashline Committee and a Mars Society board member.

Boucher is an entrepreneur, writer, editor & publisher. He is the founder of SpaceQ Media Inc. and CEO and co-founder of SpaceRef Interactive LLC. Boucher has 20+ years working in various roles in the space industry and a total of 30 years as a technology entrepreneur including creating Maple Square, Canada's first internet directory and search engine.
@marckboucher
Previous Canadian Space Agency Announces Spaceflight Research Opportunity
Next CSA Looking for a Few Good Engineers 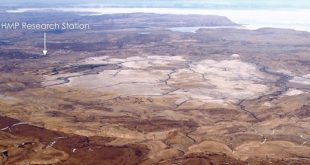 Canada's Arctic as a Moon and Mars Analog for Astronauts