Canada's Arctic as a Moon and Mars Analog for Astronauts

Of particular interest to scientists and astronauts are the Haughton Crater on Devon Island in Nunavut and Tunnunik Crater on Victoria Island in the Northwest Territories.

It is the latter, the Tunnunik impact crater, that Canadian astronaut Jeremy Hansen will be spending a good part of his summer training. He is joining a team of researchers from Western University’s Centre for Planetary Science and Exploration led by veteran Arctic explorer and planetary geologist, Gordon Osinski.

The research team of 15 including Hansen will spend a month at Tunnunik Crater performing a variety of research. The research is funded in part by the Canadian Space Agency’s Science and Operational Applications Research (SOAR) program. Western received $200,000 from this program and is using RADARSAT-2 satellite data.

“In addition to providing Jeremy with training in expeditionary field geology, the goal of this expedition is to develop new tools and techniques using RADARSAT-2 imagery for mapping the Canadian North,” said Osinski.

For Hansen the training is similar to what astronauts did in preparation for the first human mission to the moon in the late 60’s and early 70’s. 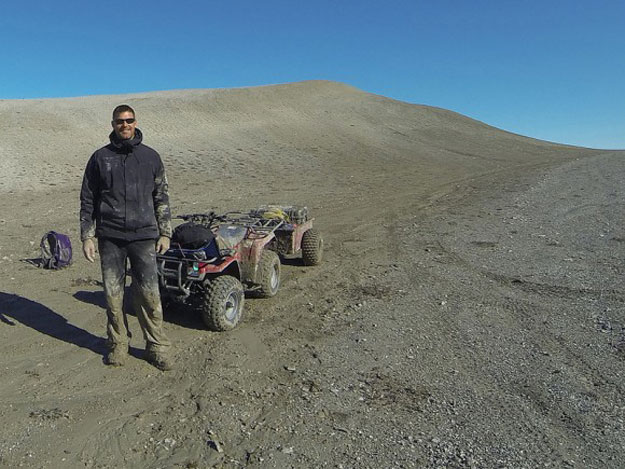 Astronaut Jeremy Hansen at Haughton Crater during a 2013 geology expedition.

Recently Canada confirmed its ongoing commitment to the International Space Station (ISS) through 2024. With that announcement the government said that Hansen and Canada’s other active astronaut, David Saint-Jacques, would each fly to space once within the next 9 years.

Once would assume that their destination would be the ISS, and with almost certainly that is the case. However, governments change, priorities change, and Canada, as a participant in the International Space Exploration Coordination Group consisting of 14 national space agencies globally, helped shape the Global Exploration Roadmap (PDF). That Roadmap is specific in that human missions going forward should focus on exploring a Near-Earth Asteroid, returning to the surface of the moon and eventually a human mission to Mars.

Hansen is young enough at 39, to not only venture to the ISS as part of an expedition crew, but could be a candidate for a mission to an asteroid or to the moon. The skills he acquires now, including expedition field geology in Canada’s moon and Mars analog regions of the Arctic, would come in very handy if he does make it to an asteroid or the moon. One can only hope that the future includes Canadian astronauts in such explorations.

You can follow the Western Arctic mission by following the Tweets of Hansen (@Astro_Jeremy) and Osinski (@drcrater) and following the hash tag #Tunnunik.

Boucher is an entrepreneur, writer, editor & publisher. He is the founder of SpaceQ Media Inc. and CEO and co-founder of SpaceRef Interactive LLC. Boucher has 20+ years working in various roles in the space industry and a total of 30 years as a technology entrepreneur including creating Maple Square, Canada's first internet directory and search engine.
@marckboucher
Previous Video: Perimeter Institute for Theoretical Physics Convergence Conference Day 3
Next University of Toronto Hosts Field and Service Robotics Conference