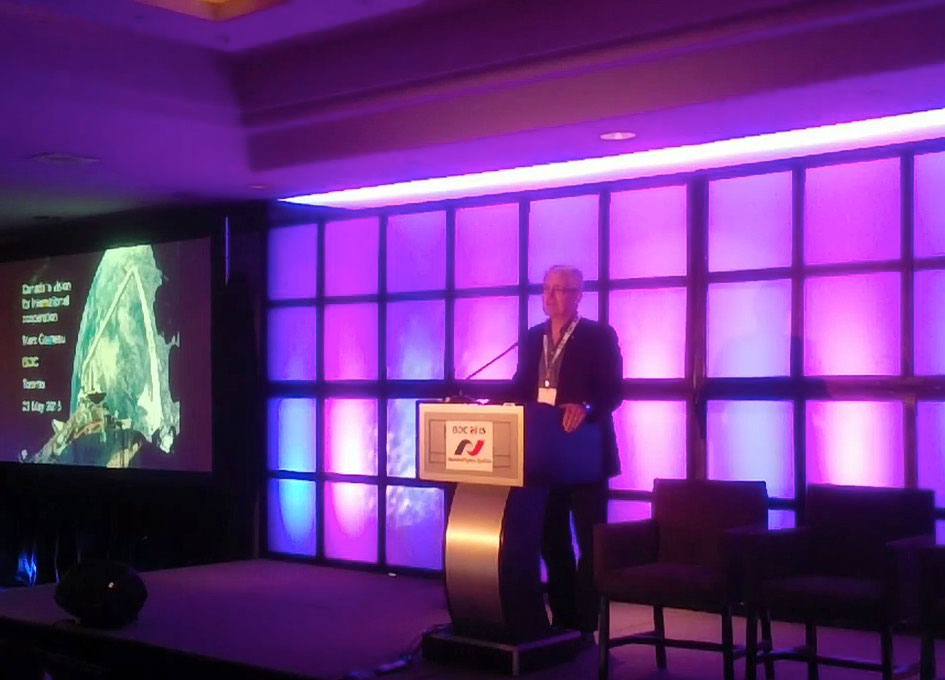 It was not meant as a political speech, but it was a political speech, at least in so much as Marc Garneau spoke on two related issues that he’s passionate about. One of which, the environment and global warming, could be a hot topic for discussion in the upcoming federal election scheduled for Monday, October 19.

Garneau is the Member of Parliament for Westmount − Ville-Marie on the Island of Montreal and just happens to be, for those who don’t know, a former Captain in the Navy, astronaut and President of the Canadian Space Agency.

He spoke last Friday, May 22nd as the morning keynote speaker at the 34th International Space Development Conference in Toronto which was co-hosted by the Canadian Space Commerce Association.

Garneau’s speech can be broken down into three segments. The first was a history of Canada’s role and accomplishments in space. With an audience that was primarily foreign, a little backgrounder made sense. But it was also a lead up to his second segment which dealt with the environment. Canada has a long history of remote sensing and earth observation for the benefit of not only Canadians, but also for the global community.

The last part of his speech dealt with the future role for Canada as he sees it. And he was clear that the views he was expressing with respect to Canada’s future space program were not Liberal policy, nor should they be be considered part of the Liberal platform. However, Garneau is in a position should the Liberals come to power, and if he’s re-elected, to have considerable influence on cabinet decisions, so anything he says regarding Canada’s future space program could be a strong indicator of what the Liberal party would do.

However, it was the issue of the environment that Garneau focused on which stood out. While recounting his experiences in space he focused on the changes to the Earth he’s seen and what earth observation data has shown us. And what he’s seen, and what the data shows, is that the Earth is changing and that it will have “important geopolitical effects on the planet and the countries on the planet in the coming decade.” He cited water shortages, deforestation and the resulting loss of soil, a growing population and the stresses on a global and local scale this will have.

Garneau then spoke of global warming saying “I believe most people now are accepting that the fact that our planet is warming, and this will create some very important long term consequences. And so I say all of this because it is important for us to pay attention to it, and it is one of the important reasons why we need to go into space. So that, yes we monitor what’s happening on the ground, but we also look at the big picture from space.”

Ironically later that evening, George Whitesides the CEO of Virgin Galactic, addressing the evening dinner crowd would spend a fair amount of his time discussing global warming and the immediate effects it will have on Earth over this century and that it was something we needed to address today, not tomorrow. He cited data from the Intergovernmental Panel on Climate Change 2014 report including showing the following chart with the different scenarios.

Garneau then spoke of the reasons why Canada is involved in space. He said “Canada needs space, we need to exploit the capability of space.” Why he asked? Because Canada is the second largest country on Earth and there are challenges that come with that. He cited the that we need to communicate over vast distances, monitor our land area and the three oceans that encompass us. So using space for this purpose “was a no-brainer.”

Then he took the time to discuss his vision for Canada’s space program going forward. It is a vision very much in line with what we’ve seen in the past but better supported, “a reasonable budget.”

He said, “what we’ve done so far has been very successful,” and mentioned that Canada has selected niches, focused on those strengths and that we should continue to build on them. He said “we can do some things ourselves but also need to keep doing things with our partners.”

“Strategically it is important for Canada to have a capability, so that we do not have to whenever we want to put something into space, depend entirely on going to another country and saying will you build this for us and put it up there in space.”

With respect to industry he was clear that Canada must continue “putting up that invisible infrastructure” and must be supported.

And it was at this point where he differentiated himself with the current government. He said government should encourage private investments “but there will still be a requirement for a healthy government publicly funded space program, because if you want to do things in space where the private sector is not willing to take the risk and to invest the money, it is only the government that can make that decision, and if the government is not willing to make that decision to help our scientists or to develop our space industry, then we’re not going to have a space program. That is the bottom line and it’s a very important one. I have to say, and I’ll get political for just one second here, unfortunately our space agency budget was cut by 10% last year, I think that’s a disastrous decision, it’s disastrous because it removes 10% of the funding, it secondly caused certain programs to be abandoned, and thirdly it caused certain people to be laid off. And people who work in the space sector are not people you can sort of just call up the next day. They’re going to go and find something somewhere else. It’s not like turning off the tap and then deciding two years from now I’ll turn it back on and I’m sure it will flow right away.”

Besides calling the Harper government decision to scale back the Canadian space program “disastrous”, he said he hoped “we will correct” the mistake the government made. Garneau ended his speech extolling Canada’s history in space saying “Canada is good at space” and that what we’ve done with our program with limited means has been incredible.

Disclaimer: The author serves as the Executive Director of the Canadian Space Commerce Association.

Boucher is an entrepreneur, writer, editor & publisher. He is the founder of SpaceQ Media Inc. and CEO and co-founder of SpaceRef Interactive LLC. Boucher has 20+ years working in various roles in the space industry and a total of 30 years as a technology entrepreneur including creating Maple Square, Canada's first internet directory and search engine.
@marckboucher
Previous Will North Bay Become a Canadian Spaceport?
Next The Government Invests $13.1 Million in 38 Space Technology Development Projects