View of Station 8 and (Mons) Mt. Hadley taken during the third moonwalk of the Apollo 15 mission. Credit: NASA.
Share

When the Diefenbaker government announced the cancellation of Canada’s Avro CF-105 Arrow in February 1959, few could have predicted the effect on the American space program.

At least 25,000 people were thrown out of work, according to The Canadian Encyclopedia, but a few dozen former Avro employees migrated south to NASA to help with the development of its human space programs, including the Apollo program that landed the first humans on the moon 50 years ago this month.

“Many believe that the Arrow’s cancellation was a betrayal of Canada’s aerospace industry,” the encyclopedia stated. “Others assert that the jet was extravagant and had little chance of competing with impending innovations. At best, Avro and the Arrow were historic examples of Canadian ingenuity and intriguing case studies of unrealized potential.”

The Arrow was supposed to be a supersonic interceptor against Soviet Union bombers who could fly to North America through the Canadian Arctic. Many of the technologies contained within Arrow were ahead of their day, including fly-by-wire and a computerized control system, according to Ingenium Canada.

The Canadian government, under pressure from the Americans, determined, however, that it was best to counteract the perceived threat using uncrewed Bomarc missiles and ordered the Avro program cancelled. Under government orders, all five Arrows were destroyed, along with their documentation and equipment.

In an interesting historical footnote: Bomarc was designed to use nuclear warheads, which the public only found out about in 1960, according to The Canadian Encyclopedia. This prompted public anti-nuclear protests and in the end, the Diefenbaker government did not use nuclear warheads – and lost the subsequent election in large part due to the uncertainty, the encyclopedia added.

But there were more pressing concerns for the Avro engineers, who were quickly scurrying for other job opportunities. Jim Floyd, Avro’s vice-president of engineering, tried to find people jobs at U.S. companies such as Lockheed and Boeing, while other employees found jobs at General Electric, Pratt & Whitney and of course, at NASA, according to the CBC. NASA had just formed its Space Task Group to begin the effort of putting American astronauts into space. About 31 Avro engineers and scientists helped NASA with this effort for the Mercury, Gemini and Apollo programs.

Chris Gainor, a historian said in an interview with SpaceQ, “the main message is that Canadians are capable of going into a world of projects, like Apollo, and holding their own and making a contribution. I don’t think any of them would say, ‘Oh we’re better than Americans’ or anything like that. Some people might be tempted to say that. But I think the message is that they can work side-by-side with the best of the world.”

The story of Avro’s contributions to NASA are already covered well in Chris Gainor’s “Arrows to the Moon: Avro’s Engineers and the Space Race” (Apogee Books, 2001). Gainor commented on two of those employees who were recently honoured on Canada Post stamps for their contributions to the Apollo program: Jim Chamberlin and Owen Maynard.

What few know about the Avro engineers is that 19 of them, by Gainor’s count, were originally British. Many of these Europeans rose to high ranks in NASA, such as John Hodge (one of the first flight directors). Gainor agreed, however, that the contributions of Canadians Chamberlain and Maynard do stand out even among the talented Avro group.

Chamberlain’s contribution to NASA’s first astronaut program, Mercury, came through his production experience at Avro, Gainor said. He knew how to build several copies of an aircraft, a skill that translated to spacecraft. This knowledge quickly moved him up the ranks to chief engineer for Mercury, working directly with McDonnell to make sure the spacecraft were produced to spec.

“Having said that, Chamberlain did not like the design of the Mercury spacecraft, because a lot of the systems were just kind of piled on top of each other and they were difficult to get at [for preflight maintenance],” Gainor explained. Chamberlain’s frustration with this was crucial to the design of Gemini. In that two-person spacecraft – which was used to test rendezvous, docking and spacewalks ahead of the moon missions – the systems were laid out around the cockpit so they could more easily be serviced on the launch pad, Gainor said.

Chamberlain also believed in modularizing systems, which brought him to the central debate of the Apollo program – how to get people to the moon. There were three ideas floating around in the early 1960s – direct launches to and from the moon, an Earth orbit rendezvous with multiple rockets, and a lunar orbit rendezvous using two small spacecraft that would ride to space in the same rocket.

“People were kind of terrified of lunar orbit rendezvous because at this stage [in early 1962] they only had maybe a half hour’s flight experience,” Gainor explained. The first two American flights – with Alan Shepard and Gus Grissom – were only 15-minute suborbital hops. Even the first Earth orbit docking was years away and would have to await the Gemini program, as history showed.

Famously, NASA’s John Houbolt, a young member of the Lunar Mission Steering Group, championed the lunar orbit rendezvous. This was despite – as a 1961 memo he wrote directly to incoming associate administrator Robert Seamans once said – feeling like “a voice in the wilderness”. The thinking was that this would be the least mass possible to bring to the moon, saving on time and complication. Chamberlain immediately grasped the benefits and supported Houbolt, whose concept was adopted for Apollo, Gainor said.

Chamberlain’s later work with NASA included being first manager of the Gemini program (where he didn’t last for long as some early design issues were unfairly placed on him, Gainor said); helping to reduce weight on the Apollo lunar module to make it possible to heft it into space; troubleshooting a rocket panel that blew out during the uncrewed flight of Apollo 6; and doing some early design on the space shuttle. “Unfortunately he died two weeks before the first [shuttle] flew [in 1981],” Gainor said.

Owen Maynard was the first member of the Avro group to move over to Apollo, where he began work on the Mercury program. But Maynard’s real contributions came with the Apollo lunar module: “As far as I know, Owen Maynard was the first guy at NASA to seriously think about what a lunar module would entail,” Gainor said. He worked with Max Faget (a spacecraft designer) and Katherine Johnson (a mathematician who specialized in orbital mechanics) to create schematic drawings of the command module, and was another supporter of the idea of lunar orbit rendezvous.

Later, he was put in charge of systems engineering of the Apollo program. “The way it’s been explained to me is he was in charge of making sure that everything hung together,” Gainor explained. One prominent example was the command and service module (made by North American Aviation, a U.S. Air Force contractor) and a lunar module (made by Grumman, a Navy contractor). While the companies had different ways of doing things, Gainor said, the two spacecraft did have to interact properly with each other. “This is where Owen and his people came in,” he said.

Is SpaceQ's Associate Editor as well as a business and science reporter, researcher and consultant. She recently received her Ph.D. from the University of North Dakota and is communications Instructor instructor at Algonquin College.
Previous Perspectives on the Apollo Program with Historian Roger Launius
Next DRDC RFP Sets Sight on Hyper-Spectral Imaging Satellites and a Multi-Purpose SSA Microsatellite 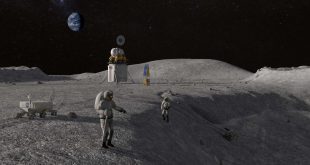 The past is prologue – From Apollo to Artemis 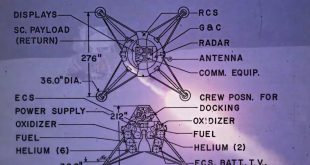