There’s an urgent need for ventilators as the novel coronavirus (COVID-19) pandemic makes its way around the world. Canada’s Space Engine Systems (SES) has a developed new ventilator almost ready for use, as long as medical authorities approve the work.

The Edmonton-based company normally focuses on a 100 percent reusable turbine engine that can fly as high as 30 km in altitude, for transportation purposes. The company has internally funded most of its work and is hoping to have that project ready by 2023.

But as the pandemic began to rise in Canada and the United States last month, one of the senior engineers at SES suggested the company could use its expertise to create a COVID-19 ventilator. Since SES has a small business creating spacesuit technology for moon missions, it wasn’t too difficult a pivot, said president Pradeep Dass in an interview.

“Everything was built from scratch so we would not tap the supply chain at all,” Dass said. The design uses space, aerospace, oil, gas and automotive parts that are, where possible, manufactured in house. All parts will be cleaned with oxygen to allow for medical use.

The approach to making ventilators like this is unique, and will allow Space Engines to manufacture thousands of ventilators within a short period. But the disadvantage, Dass said, is it may be more difficult to get certification as the ventilators do not use standard medical parts.

SES’ pivot to ventilator systems puts the small company (which has 14 engineers and nine subcontractors) in a field already populated by space people wanting to help. A ventilator made by NASA’s Jet Propulsion Laboratory was created in only a month and recently approved for use by the Food and Drug Administration. Maxar has also created a ventilator to use in COVID-19 patients.

Dass says that compared with the competition, his ventilator type has at least three unique attributes: it can be used in the hospital or in the field (with an oxygen back-up), it can treat single or multiple patients at the same time, and there is software available that can (in part) use artificial intelligence to allow nurses and doctors to treat multiple patients.

The company has been moving quickly. It could have the most simple ventilators, which can serve 20 or more people at the same time, ready within a few weeks for simulation and certification. Potential partners in the United States and the United Kingdom are seeking medical approval for the ventilators. Conversations with Canadian provincial and federal authorities are also proceeding, but are at an early stage, Dass said.

He emphasizes his company does not usually work in the medical sector, and that the core business of space engines will remain the focus of SES. If the ventilators do succeed as a business line, Dass is toying with the thought of a separate spinoff company focused on disaster management, to deploy resources appropriately.

“We will include fire, earthquake, floods, medical and other natural and man made disasters [in the spinoff],” he explained. “Though it may sound like a fiction story or even hurt our credibility by stating it, we will also spend resources on how to mitigate an asteroid disaster on earth if we set up a disaster management company. All these may not have an immediate business case, or ROI [return on investment] or exit strategy from an investors’ stand point. This is what I do … never focused on piling up tons of money for personal gain, but to reinvest into the most advanced technologies which will make a difference to mankind.”

Is SpaceQ's Associate Editor as well as a business and science reporter, researcher and consultant. She recently received her Ph.D. from the University of North Dakota and is communications Instructor instructor at Algonquin College.
Previous Rocket science is proven on the rocket engine test stands
Next Canada – A new place for space 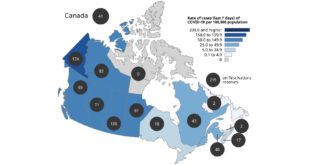