SkyWatch Raises $4 Million in Seed Round for Earth Observation Platform

SkyWatch today announced that it had raised $4 million in its seed round of funding to continue development of its Earth Observation platform EarthCache.

SkyWatch has been developing what it calls an “aggregation and distribution platform for satellite data” since mid-2014 when it won the global NASA SpaceApps Challenge, beating out over 650 teams from around the globe in the Best Use of Data challenge.

James Slifierz, CEO of SkyWatch told SpaceQ in an extensive interview, featured in this weeks podcast, that it’s only been in the last couple of years that the tools and platforms have become available that allow them to build an aggregation platform with their proprietary algorithms that is allowing them to build out such a massive, scalable and importantly, cost effective solution.

At first they began using Google’s platform which was available to them when they first setup at Communitech in Waterloo, in area sponsored by Google. However, over the last year or so they’ve migrated their platform over to Amazon’s Web Services (AWS), and Slifierz in particular, mentioned the use of the AWS Lamdba compute service. That service, along with others they use, allows them to run their code without provisioning or managing servers. According to Slifierz, Lambda only executes their code when needed and they only pay for it when the service is being used rather than having servers continually running 24 hours a day.

Slifierz said of the funding “because Earth observation data has the potential to positively impact everyday life in so many ways, everyone should have the ability to easily incorporate this unique data type into their software applications. However, the barriers have been far too high, until now. SkyWatch was started with this vision and we’ve spent the past 3 years developing our platform alongside our early adopters. Satellite data integration into any software application is now as easy as payments integration via Stripe, or communications integration via Twilio. We’re excited for the tremendous growth ahead, for both the company and the industry,”

The podcast is also available on Apple Podcasts and SoundCloud.

Boucher is an entrepreneur, writer, editor & publisher. He is the founder of SpaceQ Media Inc. and CEO and co-founder of SpaceRef Interactive Inc. Boucher has 20 years working in various roles in the space industry and a total of 28 years as a technology entrepreneur including creating Maple Square, Canada's first internet directory and search engine.
@marckboucher
Previous Toronto’s Space Flight Laboratory Celebrates 20 Years of Excellence
Next New Global Exploration Roadmap Recognizes the Moon as an Important Step and Increasing Private Sector Role 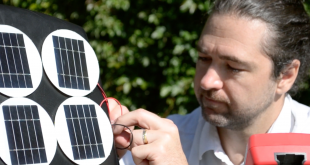