In a surprise move the White House yesterday released a National Space Policy giving reporters scant notice and leaving many to wonder how serious the Obama administration is with respect to U.S. space activities. The policy which focuses on stronger international cooperation comes at a time when the White House is an a protracted battle with congress over the future of NASA’s Constellation space exploration program with thousands of jobs lost and many more at stake.

The 18 page document has a very strong focus on international cooperation which is a good for Canada. This does not come as a surprise to the Canadian Space Agency (CSA) who have worked closely with the Americans on many key projects including the International Space Station and more recently the James Webb Telescope.
In fact the CSA’s strategy, based on a quiet space policy, has been focused on the very premise that the U.S. was indeed going to rely more heavily on international partners in the future and that Canada would be positioned to take advantage of this. Canada’s quiet space policy is an internal policy whereby a strategy is pursued but the actual policy is not released publicly.
Canada’s public space policy which is outlined in what is known as the Long-Term Space Plan (LTSP) has been outdated for many years. The last LTSP was approved for release in November of 2003 in a document called the Canadian Space Strategy. Since 2008 the CSA has been working on and reportedly completed a new LTSP but the government has yet to release it. With the U.S. releasing a new National Space Policy perhaps the government will release the much anticipated Canadian Long-Term Space Plan.
Here are the Key Elements of the Administration’s National Space Policy
– The United States remains committed to many long-standing tenets in space activities. The United States recognizes the rights of all nations to access, use, and explore space for peaceful purposes, and for the benefit of all humanity.
– The United States calls on all nations to share its commitment to act responsibly in space to help prevent mishaps, misperceptions, and mistrust. The United States will take steps to improve public awareness of government space activities and enable others to share in the benefits of space through conduct that emphasizes openness and transparency.
– The United States will engage in expanded international cooperation in space activities. The United States will pursue cooperative activities to the greatest extent practicable in areas including: space science and exploration; Earth observations, climate change research, and the sharing of environmental data; disaster mitigation and relief; and space surveillance for debris monitoring and awareness.
– The United States is committed to a robust and competitive industrial base. In support of its critical domestic aerospace industry, the U.S. government will use commercial space products and services in fulfilling governmental needs, invest in new and advanced technologies and concepts, and use a broad array of partnerships with industry to promote innovation. The U.S. government will actively promote the purchase and use of U.S. commercial space goods and services within international cooperative agreements.
– The United States recognizes the need for stability in the space environment. The United States will pursue bilateral and multilateral transparency and confidence building measures to encourage responsible actions in space, and will consider proposals and concepts for arms control measures if they are equitable, effectively verifiable, and enhance the national security of the United States and its allies. In addition, the United States will enhance its space situational awareness capabilities and will cooperate with foreign nations and industry to augment our shared awareness in space.
– The United States will advance a bold new approach to space exploration. The National Aeronautics and Space Administration will engage in a program of human and robotic exploration of the solar system, develop new and transformative technologies for more affordable human exploration beyond the Earth, seek partnerships with the private sector to enable commercial spaceflight capabilities for the transport of crew and cargo to and from the International Space Station, and begin human missions to new destinations by 2025.
– The United States remains committed to the use of space systems in support of its national and homeland security. The United States will invest in space situational awareness capabilities and launch vehicle technologies; develop the means to assure mission essential functions enabled by space; enhance our ability to identify and characterize threats; and deter, defend, and if necessary, defeat efforts to interfere with or attack U.S. or allied space systems.
– The United States will fully utilize space systems, and the information and applications derived from those systems, to study, monitor, and support responses to global climate change and natural disasters. The United States will accelerate the development of satellites to observe and study the Earth’s environment, and conduct research programs to study the Earth’s lands, oceans, and atmosphere.

Boucher is an entrepreneur, writer, editor & publisher. He is the founder of SpaceQ Media Inc. and CEO and co-founder of SpaceRef Interactive LLC. Boucher has 20+ years working in various roles in the space industry and a total of 30 years as a technology entrepreneur including creating Maple Square, Canada's first internet directory and search engine.
@marckboucher
Previous Planetary Science Short Course
Next Canadian Space Agency Awards Concept Studies for Planetary Missions 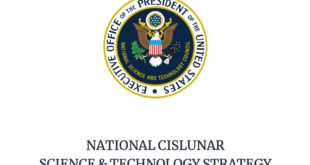