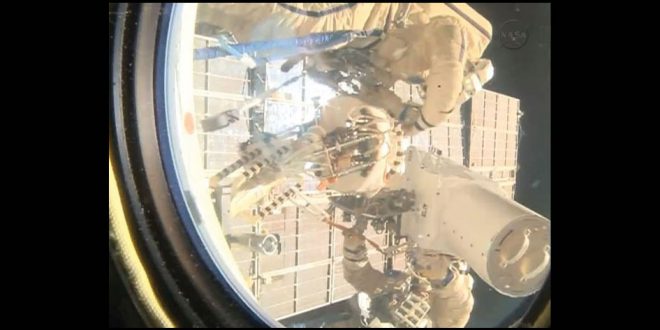 UrtheCast Corp. announces that on Dec. 27, 2013, its two Earth observation cameras were installed as planned on the outside of the International Space Station (ISS). However, Mission Controllers were unable to confirm that the cameras were receiving power from the ISS.

As a safety precaution, the cameras were removed and re-stowed inside the ISS pending resolution of the problem. UrtheCast expects to provide further information and the date of the rescheduled space walk by mid-January or sooner as information becomes available. At this time, the Company expects that there will be little or no material impact on its business plan for 2014.

The installation of the cameras proceeded according to plan and without incident. During a spacewalk, Russian cosmonauts were able to transport the cameras to their mounting position and install them quickly and efficiently. However, soon after installation, the Mission Control Centre (MCC) outside of Moscow was unable to receive any data from either camera (contrary to what was reported during the live transmission of the spacewalk). Without this data, engineers in the MCC were not able to confirm that the cameras were receiving the power necessary to allow them to survive the temperature fluctuations of the space environment. As a consequence, senior technical personnel from UrtheCast and RSC Energia (UrtheCast’s Russian partner) jointly decided that the safest and most prudent course of action was to uninstall the cameras and bring them back inside the ISS to be reinstalled at a later date, once the data transmission problem has been solved.

UrtheCast’s Chief Technology Officer, Dr. George Tyc, was present at the MCC throughout the operation, along with the Company’s Chief Engineer for Space Systems, Mr. Greg Giffin. Said Dr. Tyc, “The fact the neither camera could communicate with the MCC strongly suggests that the problem lies inside the ISS and it is not a problem with the cameras or external cables. This kind of issue has been encountered before on the ISS and can be fixed in the near-term. Bringing the cameras back inside to be installed another day was simply the right engineering decision.”

RSC Energia has formed a Commission to quickly analyze and fix the problem and it has already held its first meeting. This is standard procedure at RSC Energia, which has a long and very successful history with manned space systems — it has established a rigorous process to deal quickly and efficiently with anomalies of this type when they occur. The Commission will work in close cooperation with UrtheCast’s engineering team. Once the Commission completes its assessment and has determined the timeline for the fixes required, a second spacewalk will be scheduled to reinstall the cameras.

“Delays like this happen in space. That’s the nature of the business,” explained Scott Larson, UrtheCast’s Chief Executive Officer. “The critical thing is to proceed carefully and deliberately, without taking undue risk. Fortunately, our project is on a manned platform, which gives us the ability to respond to incidents of this kind as they arise. The right decision was made to ensure the long-term success of this joint project. We are grateful for the extraordinary professionalism and dedication of UrtheCast’s and RSC Energia’s technical personnel.”

UrtheCast will provide an update with further progress regarding the cameras’ rescheduled installation as information becomes available, which will be confirmed by the results of the Commission. In the meantime, UrtheCast is focusing its efforts on the commissioning and testing of the other parts of the system and will continue its business development efforts.

Boucher is an entrepreneur, writer, editor & publisher. He is the founder of SpaceQ Media Inc. and CEO and co-founder of SpaceRef Interactive LLC. Boucher has 20+ years working in various roles in the space industry and a total of 30 years as a technology entrepreneur including creating Maple Square, Canada's first internet directory and search engine.
@marckboucher
Previous The Harper Government Takes the Easy Path on Emerson Space Recommendations
Next MDA to Provide Subsystem for the European Data Relay Satellite C