UNISPACE+50: Inspiration and a Call to Action

The international space community gathered from 18-21 June in Vienna, Austria to celebrate the 50th anniversary of the first global Conference on the Exploration and Peaceful Uses of Outer Space (UNISPACE).

Under the auspices of the Committee on the Peaceful Uses of Outer Space (COPUOS) and the UN Office of Outer Space Affairs (UNOOSA), the UNISPACE+50 conference emphasized seven thematic priorities related to promoting enhanced international collaboration in outer space, the mobilization of space technology and applications for socioeconomic development, and more effective space governance. Intended as a blueprint for a Space 2030 Agenda on how to better utilize space assets to achieve the 2030 Agenda for Sustainable Development, this global summit was clearly focused on Earth’s inextricable link to space and how those links can help to preserve life on our planet.

Those of us who work in fields related to outer space look to the world beyond Earth with imagination, hope, and ambition. UNISPACE+50 forced us to refocus on Earth, by showing the many ways in which the future of all life on Earth in the next decade is inextricably connected to human activities in outer space. As former American astronaut and current UN Ambassador for Space Scott Kelly asserted, “if we’re going to survive” as a species, “we need to survive on Earth.” Despite Earth’s many challenges, he stated, it’s far easier to take care of this planet than to build a new one.

The meeting was both a celebration of our achievements in space and a call to action.

There is much to celebrate. The sheer amount of activity and investment in outer space is striking. While 2017 marked the largest number of objects launched into space and registered with the UN – 453 – this figure hardly captures the scope and diversity of activity in space science. More than 60 national statements by countries as diverse as Ghana, Cyprus, and Thailand, in addition to accounts by regional and political organization, make clear that space is a global endeavour.

An original theme of these conferences was to extend access to space and its benefits to emerging spacefaring states. Now, as space ventures become more global and more inclusive, the long-ignored talents of women, youth, minorities, and civil society are being better employed. And, of course, the leadership of the private sector must be applauded.

But challenges must also be confronted. Two stand out: 1) mobilizing resources and data for sustainable development and 2) enhancing space governance.

The astronomical rise in private sector investment and activities in outer space is not automatically or naturally linked with sustainable development on Earth. Several commercial actors—such as Planet—are attempting to forge new ties, by reducing the cost of space-generated Earth observation data and working with international organizations such as Amnesty International, the International Charter on Space and Major Disasters, and the United Nations Platform for Space-based Information for Disaster Management and Emergency Response (UN-SPIDER).

To meet sustainable development goals, space-based data must be available for more than emergencies and become integrated with everyday life and activities around the world. Time is not on our side if we are to achieve the sustainable development goal’s by 2030. Neither is money. How can we generate the funds necessary for both innovation in space capabilities and global accessibility to space data? Clearly, new and inspirational leadership from both the private sector and governments is required.

Ongoing leadership on space governance is another necessity. Canada has brought expertise and leadership to COPUOS, both through the two-year chairmanship by David Kendall and in contributions to the Working Group on the Long-term Sustainability of Outer Space Activities under the Chairmanship of Peter Martinez. Today COPUOS is one of the most productive, relevant, and quickly growing bodies of the UN.

Now there are growing demands to govern new space activities, such as the commercial exploitation of mineral resources in space, and to continue progress on requirements for long-term sustainability. And yet fissures run deep. Some states and organizations prefer rules of responsible behaviour rather than new legal mechanisms, and there are tensions between private investment and universal benefit, and unleashing innovation while maintaining needed constraints.

COPOUS is not a disarmament body; it is tasked strictly with the peaceful uses of outer space. While it does its best to isolate its work from non-peaceful uses, the two are inherently linked. For example, many states want to bar the DPRK (North Korea) from attending regular proceedings of COPUOS as an observer in the context of UN Resolutions against its ballistic weapons program. Non-peaceful uses could also derail the momentum of the UNISPACE agenda.

The rising potential of warfare in outer space clouds all discussions of outer space. Although beyond the scope of UNISPACE+50 and the mandate of COPUOS, this concern was in the background of many national statements. It was further highlighted by U.S. President Trump’s coinciding announcement aiming to create a military Space Force.

Scott Kelly reminded us of how thin and fragile the atmosphere is—the only true global border, separating us from the vast expanse of space. Leadership on global space governance is urgently needed, both at COPUOS, at the national policy level, and within the private sector. Only with such leadership can we ensure the future safety, security, and sustainability of outer space—and of Earth.

UNISPACE+50 marks a new beginning to a process: a call to action to preserve and serve all humanity. It’s up to us to follow.

Related: UNISPACE+50 concludes with global commitment to cooperate in space and use space for sustainable development .

Contributed by: Jessica West is the Project Manager for the annual Space Security Index published by Project Ploughshares. 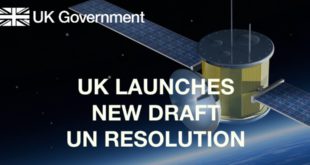