“The rapid development of mega-constellations risks multiple tragedies of the commons, including tragedies to ground-based astronomy, Earth orbit, and Earth’s upper atmosphere. Moreover, the connections between the Earth and space environments are inadequately taken into account by the adoption of a consumer electronic model applied to space assets. For example, we point out that satellite re-entries from the Starlink mega-constellation alone could deposit more aluminum into Earth’s upper atmosphere than what is done through meteoroids; they could thus become the dominant source of high-altitude alumina. Using simple models, we also show that untracked debris will lead to potentially dangerous on-orbit collisions on a regular basis due to the large number of satellites within mega-constellation orbital shells. The total cross-section of satellites in these constellations also greatly increases the risks of impacts due to meteoroids. De facto orbit occupation by single actors, inadequate regulatory frameworks, and the possibility of free-riding exacerbate these risks. International cooperation is urgently needed, along with a regulatory system that takes into account the effects of tens of thousands of satellites.”

The issue of LEO becoming congested has been a discussion for many years now and those that left their space debris behind have been negligent in dealing with it. In 2018 the US issued Space Policy Directive 3 on space traffic management thus positioning itself to be a leader in this area. However, there is no international plan on how to deal with the issue of a congested LEO or the removal of debris that’s accumulated over the decades.

The environmental impact of more debris reentering and affecting the atmosphere is a newer discussion which needs more research.

Read the paper on the risks of mega-constellations

Boucher is an entrepreneur, writer, editor & publisher. He is the founder of SpaceQ Media Inc. and CEO and co-founder of SpaceRef Interactive LLC. Boucher has 20 years working in various roles in the space industry and a total of 30 years as a technology entrepreneur including creating Maple Square, Canada's first internet directory and search engine.
@marckboucher
Previous The lessons learned by playing the popular Kerbal Space Program
Next Canadian Lunar Workshop program released 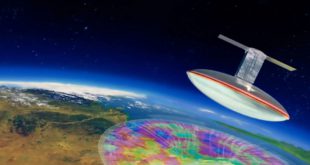