Forget any perceived space race between the U.S., China, Russia and yes, even India, the real race consumers are interested in right now is who will deliver broadband internet from low Earth orbit. In this race SpaceX’s Starlink has an early lead, but is the hype and marketing outpacing reality?

Starlink and the LEO broadband race

Did you put a deposit down for the Starlink service? Have you received your invitation to order ‘Dishy?’ For some, waiting is not measured in weeks, but months.

For North American customers the race is between Starlink, Amazon’s Kuiper, OneWeb and to a lesser extent Telesat. Telesat won’t sell direct to consumers, but will sell to Internet Service Providers in remote regions who will then resell the service.

SpaceX has nearly 1400 active Starlink satellites in orbit. OneWeb has 182 satellites in orbit, while Telesat has 1 demonstration satellite, and Kuiper has none. While SpaceX has the first mover advantage, they can’t ignore OneWeb or Amazon, and aren’t. I’ll discuss that more in a future article.

Earlier this year SpaceX started accepting deposits from Canadians. The move was in part to build on their first mover advantage and to persuade customers to get in line for service. And it’s working. The problem is access to the beta service is still limited and will remain limited until SpaceX gets its ground stations in Canada built and approved.

While SpaceX has said the service will come out of beta later this year, how will that work in Canada? The company still has no approved ground stations in Canada other than its experimental site in Newfoundland. That seriously limits the availability of the service. What happens when the beta is lifted in the U.S. and those U.S. based ground stations that are servicing Canadians see a spike in demand from local customers?

To get a ground station approved in Canada can be a taxing and slow process. This is in part due to outdated regulations and chronic understaffing in the space related divisions at the departments of Innovation, Science and Economic Development (ISED) and Global Affairs Canada.

Starlink users are continually scanning the ISED Satellite Earth Station Service list to see if any new Starlink ground stations are appearing. The CSV zip file is updated once a month. Compare that to the U.S. where updates of approved ground stations appear almost daily. We are also seeing ground stations being approved in Australia, Germany and elsewhere quite quickly.

As for OneWeb, do they have an advantage on the ground station front? According to their website they expect ground stations to be active in Canada by the end of this year. And since they’re looking at offering service in the Arctic region in Canada first, it’s possible they’ll use the government owned Inuvik Satellite Station Facility. That could expedite their service.

Part of the problem in Canada has nothing to do with the commercial service providers. Simply put, Canada is a laggard when it comes to ground station approvals.

I recently communicated with Starlink with questions that users are constantly asking. This includes when will residents in Québec have access to the service? Starlink declined to answer other than to reiterate that the service was in beta and that they were working on expansion into other areas. A very generic answer. It’s a puzzling issue.

Is language an issue? Possibly, though SpaceX, once again, won’t comment. The Starlink website is in English, and the app is in English, but the regulatory notice that comes with the dish is bilingual.

In February regulators in France approved the Starlink service and the English only Starlink website is accepting deposits from French customers now for service availability “mid-to-late 2021.” With Starlink going live later this year in France, and if language is ‘the issue’ for Québec, then you might expect that Québec will finally be able to get service later this year.

As part of their response to my query, Starlink did send me a link to the following video which demonstrates what their service means to those in remote and rural locations. For the people of the Pikangikum First Nation, the Starlink service is a game changer.

It’s a reminder what’s at stake for many remote communities and that those waiting for service need to be patient. SpaceX, OneWeb, Amazon and Telesat should all eventually have the capability to service those who want their service.

Boucher is an entrepreneur, writer, editor & publisher. He is the founder of SpaceQ Media Inc. and CEO and co-founder of SpaceRef Interactive Inc. Boucher has 20 years working in various roles in the space industry and a total of 28 years as a technology entrepreneur including creating Maple Square, Canada's first internet directory and search engine.
@marckboucher
Previous Earth Observation industry is missing opportunities
Next Connecting the world by leaving the planet 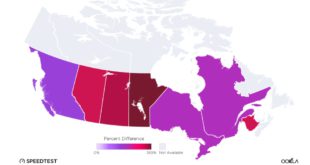