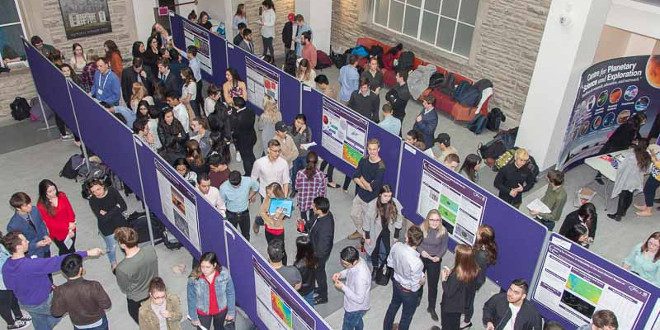 Space Day at Western University Reveals Out of the Silo Thinking

Western University’s Department of Physics and Astronomy hosted its third annual Space Day last Wednesday, April 5. The event highlighted current research by undergraduate and graduate students from the faculties of Science, Engineering, and Social Science who work with the Centre for Planetary Science and Exploration.

The day’s events were highlighted by poster sessions by undergraduate and graduate students, presentation of new project ideas by graduate students, a HiRISE remote mission control tour, and a keynote lecture by Dr. Bernard Foing of the European Space Agency (ESA) who is a Senior Scientist at the European Space Research and Technology Centre (ESTEC), and was the Principal Project Scientist for ESA’s SMART-1 mission to the moon.

Western’s Centre for Planetary Science and Exploration (CPSX) has been gradually expanding and building a network within the university spanning the faculties of Science, Engineering, and Social Science.

The expansion of that network is ongoing and other faculties will be approached in due course.

This approach is meant to break down silos and expose students who would normally focus primarily within their faculties with opportunities to gain needed knowledge and skills needed to work in today’s real world environment.

Putting that approach to work is what some graduate students have done. As part of the Space Day, graduate students approached faculty and asked if they would let them pitch some new project ideas. The response was, of course.

The three ideas pitched are not traditional projects CPSX takes on. The ideas included;

The project could allow students to use the balloon for;

The students said the project would push “the boundaries of CPSX”.

The next group of students pitched a remote autonomous greenhouse which would necessitate bringing in the biology department and would build apps for electronics and mechatronics.

Eventually the students hope that the ideas and technology from this initial project would be used on a lunar greenhouse. To start though they’ll setup shop on campus.

Matt Cross is a Postdoc at Western in the Department of Electrical and Computer Engineering. He wants Western to get involved in building nanosats. It’s something CPSX has been thinking about for a couple of years. The timing is great as there’s an ongoing revolution in small satellites.

The effort which is still in the idea phase, but should move forward, would see Western possibly joining the Canadian Satellite Design Challenge in the future, should that program still be going.

Cross wants students from a variety of faculties to be involved and wants students to get the full hands-on experience. He’s also advocating thinking big. It’s not just about using a CubeSat form to send something into Low Earth Orbit (LEO). It’s about thinking beyond LEO and opportunities at the moon or elsewhere in the solar system.

Most students, faculty and the city of London don’t know it, but in the Physics and Astronomy building in a nondescript room is a remote mission control for NASA’s Mars Reconnaissance Orbiter High Resolution Imaging Science Experiment (HiRISE).

Coincidentally during Space Day, faculty and students were once again helping to help plan a 2-week set of HiRISE images. Those attending Space Day were given the opportunity for a tour and to watch the planning activities.

Dr. Bernard Foing, the keynote speaker, had two themes for his keynote.

The first was an overview of past and current missions being conducted by the European Space Agency (ESA). He then focused on the “Moon Village“, a concept being pushed the last couple of years by ESA’s new Director General, Jan Wörner at many space conferences and now featured in London.

ESA describes the concept as follows;

“The Moon Village concept was developed through a process of thorough analysis but it is vital to understand that what we are describing is neither a project nor a programme. By ‘Moon Village’ we do not mean a development planned around houses, some shops and a community centre. Rather, the term ‘village’ in this context refers this: a community created when groups join forces without first sorting out every detail, instead simply coming together with a view to sharing interests and capabilities.”

This video provides an in depth look at the Moon Village. And yes the moon is a part of the plan.

The Maturation of the Centre for Planetary Science and Exploration

With each Space Day, Western’s Centre for Planetary Science and Exploration has been showcasing measured growth in its program. The ‘out of the silo thinking’ is winning converts and engaging students who might not normally be involved in space activities. The capabilities being developed at Western should serve Canada well.

Boucher is an entrepreneur, writer, editor & publisher. He is the founder of SpaceQ Media Inc. and CEO and co-founder of SpaceRef Interactive LLC. Boucher has 20+ years working in various roles in the space industry and a total of 30 years as a technology entrepreneur including creating Maple Square, Canada's first internet directory and search engine.
@marckboucher
Previous Dextre and Being in the Critical Path
Next Help Young Scientists, Provide More Funding, Improve Oversight Says Expert Panel as Part of Canada’s Fundamental Science Review