Recently, there has been noteworthy news related to small satellites. First and significantly, the U.S. Federal Communications Commission (FCC) released details of new applications from companies wanting to deploy constellations of small satellites, most in non-geostationary orbits (NGSO).

This included applications from two Canadian companies, Kepler Communications and Telesat. The total number of planned NGSO satellites in applications filled since June of this year, is close to 9,000. To put that number in context, there are currently only a little over 1,400 active satellites of all sizes in orbit. To add another approximate 9,000 satellites in the coming years, all in non-geostationary orbits, is unheard of.

Three companies account for the bulk of these satellites; SpaceX with 4,425, Boeing with 3,016 and OneWeb with 720.

When we’re talking about small satellites, we’re only including satellites that weigh less than 1,000 kg, with the vast majority of these satellites weighing in at less than 500 kg.

However, while SpaceX, Boeing and OneWeb satellites will all weigh in at several hundred kilograms, others like Kepler’s, will be much smaller with initial satellites weighing 5 kg and fall into the class called CubeSats.

Most of the satellite constellations are only in the planning stages and many companies still need to raise the necessary funds to build them and the odds are several will either fail or scale back their plans. OneWeb however, has raised enough money to start manufacturing.

The second announcement was that Fourth Canadian Satellite Design Challenge is underway, with a record 13 universities involved.

You would think these two news items would be great for Canada’s space program. The answer though, is not an unequivocal yes. Here’s why.

Along with Kepler and Telesat, Canadian companies UrtheCast*, NorStar Space Data, GHGSat, and Promethean Labs are all planning their own small satellite constellations. Here’s the problem, all but GHGSat are currently planning on manufacturing their satellites outside of Canada.

GHGSat is planning on launching two more satellites in the short term, and in the the medium/long-term they will either launch, or have their sensors hosted on at least 20 satellites as part of a constellation. They plan on announcing in January who will manufacture their satellites, and they to, could select a foreign manufacturer.

Last week Kepler announced that their two prototype satellites will be built by Clyde Space of Scotland. They will however build their own proprietary sensor in Canada. As well, Kepler’s initial $5 million in funding, it came from a U.S. venture firm.

It should be noted that Clyde Space is becoming a leader in manufacturing CubeSats. The government of Scotland enticed a U.S. company, Spire, to setup offices in Glasgow with $2 million. Right next door is Clyde Space who manufacture subsystems for Spires initial constellation of 100 satellites.

UrtheCast is also planning on using Surrey Satellite Technology Limited (SSTL) for their constellation. NorStat is working with NovaWurks of Los Alamitos, California, and Promethean Labs also plans on using a foreign manufacturer.

So why aren’t these satellites being built in Canada? It’s not like we lack the talent. And from a cost perspective, if you look at the dollar, it’s cheaper to build in Canada.

The investment community is behind the curve on this one. They are too conservative and looking for unicorns, when they could be investing in companies in this fast growing sector.

The government has also missed the boat on small satellites, investing little over the last 10 years. 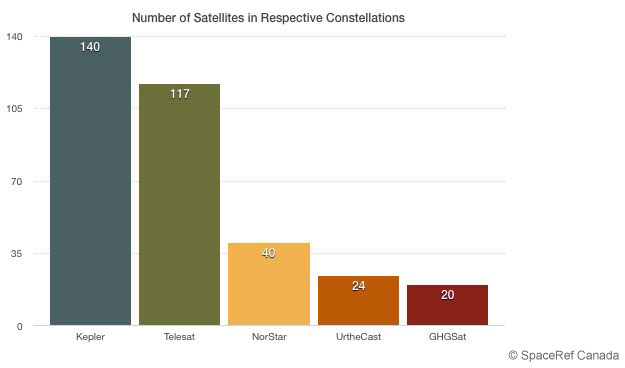 Here we circle back to the Canadian Satellite Design Challenge.

The team behind this challenge has been motivating students across the country since 2011 with little support from the government. The first three winners of the challenge have been unable to complete the necessary experience of designing, building and flying their CubeSat as there has been no funding to launch their satellite. The cost to launch their CubeSat using a provider like NanoRacks would be around $225,000. Why didn’t the Canadian Space Agency step-up and support this initiative to completion?

How is it that the successive governments have not latched onto this? We are after-all talking about innovating in high tech. These students are acquiring desired skill sets but most are unable to find jobs in this sector. Many of these students will end up leaving Canada to work elsewhere in precisely the fields we want to keep in here.

Canada is missing an opportunity to create highly technical jobs and create a new manufacturing sector.

Part of the blame also rests on the Canadian Space Agency. They represent the community to government. It’s up to them to inform government on what should be supported.

It is true that they have supported the Canadian Satellite Design Challenge with in-kind service of using the David Florida Laboratory for satellite testing, but that’s not enough.

And yes, the Canadian Space Agency recognizes that small satellites, and in particular CubeSats are important and have said so. But where’s the plan to help foster this incredibly fast growing segment? Yes, they supported GHGSat’s sensor development, and that’s good, but it’s not enough.

It’s not like small satellites, and in particular CubeSats, came out of nowhere. This has been a segment that’s been growing for over 10 years.

In fact in 2012 the Canadian Space Agency in co-operation with the Canadian Aeronautics and Space Institute held the Canadian Nanosatellite Workshop. The report had theses conclusions:

– Nanosatellites and microsatellites have demonstrated a capability to serve operational needs in a cost-effective manner.

– Government agencies and funding organizations should explore ways to pool their resources together in order to create a fiscally achievable support program for Canadian nanosatellite development.

– Current Canadian funding programs should provide incentives for nanosatellite programs to seek and engage with international programs as a means of maximizing the leveraging of Canadian funds.

– A Canadian program analogous to the U.S. National Science Foundation’s Cubesat program should be considered.

– The Canadian community should coordinate its efforts with the goal of designing, building, launching and operating a series of nanosatellite missions.

And yet here we are, four 1/2 years later and little to show for it.

Universities are training students, that’s what they do. And a great example has been the development of the University of Toronto’s Institute of Aerospace Studies Space Flight Laboratory (SFL).

SFL is a commercial facility that also trains students. And they have slowly grown in size and are well respected. They are the leaders in Canada in building small satellites and sensors. However they aren’t currently setup for mass manufacturing. And a little over a year ago SFL lost one of its best mission designers to join a pioneering startup in Silicon Valley.

It’s time the government transition from words to action. It must provide more support for initiatives likes the Canadian Satellite Design Challenge. It must recognize an opportunity and seize upon it.

And it’s not just the manufacturing of the satellites that’s they should be focusing on. It’s encouraging development of more sensors like that of the greenhouse gas sensors developed by GHGSat.

According to the Euroconsult report Prospects for the Small Satellite Market** published earlier this year, “from 2006 to 2015, a total of 780 smallsats were launched. Nearly 500 of these were launched in the last three years alone. The total market value of these smallsats was $12.5 billion (manufacture and launch).”

As well, the report states that over the next 10 years “the total market value of these satellites is anticipated to be $22 billion (manufacture and launch), a 76% increase over 2006-2015 ($12.5 billion). Of the total $16.8 billion manufacturing market value from 2016 to 2025, 31% ($5.3 billion) is absorbed internally by in-house manufacturing. The remaining $11.5 billion is considered part of the open market.” These figures don’t include SpaceX or Boeing.

The government has an opportunity in the small satellite sector to make an impact that will foster innovation, create more high tech jobs, keep them in Canada, and it should act now.
—

* Not all UrtheCast satellites in its constellation will be small satellites weighing less than 1000 kg. Eight of the their OptiSar (SAR version) will weigh 1,400 kg.

Boucher is an entrepreneur, writer, editor & publisher. He is the founder of SpaceQ Media Inc. and CEO and co-founder of SpaceRef Interactive LLC. Boucher has 20+ years working in various roles in the space industry and a total of 30 years as a technology entrepreneur including creating Maple Square, Canada's first internet directory and search engine.
@marckboucher
Previous Short Cuts: The Commercial Ecosystem, SEDS Canada, Kepler Communications, Virtual Reality and More
Next The Search Begins for Canada's Chief Science Advisor