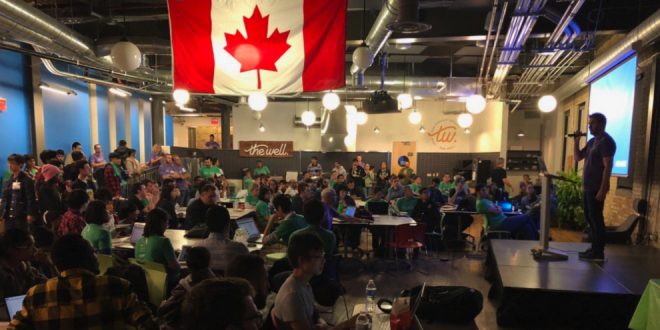 Part of the action at Space Apps Waterloo, host of the largest group of students participating in Canada. Credit: SkyWatch.

NASA’s International Space Apps Challenge Back for Another Year (Updated)

NASA’s International Space Apps Challenge is back for another year with Montreal and the Kitchener Waterloo region as the first two Canadian cities to announce their participation.

The Canadian Space Agency has yet to announce if they will participate, but based on the last couple of years and feedback we’ve heard, it would make sense for them to support events in Canadian cities.

Note: After we published this story we were contacted by one of the organizers of the Ottawa event last year who informed us they will be participating this year as well. We will post updates as we learn of more Canadian cities participating.

Boucher is an entrepreneur, writer, editor & publisher. He is the founder of SpaceQ Media Inc. and CEO and co-founder of SpaceRef Interactive LLC. Boucher has 20+ years working in various roles in the space industry and a total of 30 years as a technology entrepreneur including creating Maple Square, Canada's first internet directory and search engine.
@marckboucher
Previous The Canadian Space Agency Announces the FAST 2019 Opportunity
Next Sarah Gallagher on Leveraging Science for Innovation