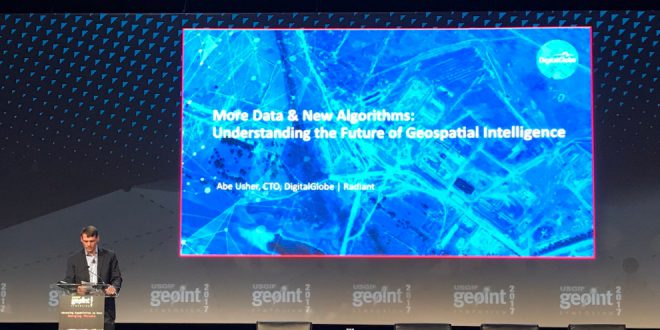 “Today is a very exciting day for our customers, partners, employees and shareholders,” said Howard L. Lance, president and chief executive officer of MDA, in a press release issued October 5, 2017. “Together, in partnership with the outstanding team at DigitalGlobe, our combined company will offer an unmatched suite of solutions, benefit from increased scale and a more diversified revenue base, and drive increased value by leveraging the sales channels of both companies. The combination of our strong, diversified core businesses will create expanded opportunities for team members and customers alike. I am very excited to get to work with the new leadership to drive top and bottom line growth and future success.”

Later the same day, MDA also announced that it would be renamed Maxar Technologies Ltd. following the acquisition of DigitalGlobe. The newly combined company is slated to “offer a broader set of space-based solutions, increased scale and a more diversified revenue base”. The MDA name won’t disappear though. The Canadian business unit will retain the MDA branding.

While the space hardware, imaging and geospatial giant will continue to produce advanced space technologies and services – such as the long awaited RADARSAT Constellation Mission (RCM) for the Canadian Government in 2018 – the acquisition of DigitalGlobe serves to reinforce a clear precedent for the future of the space technology industry in North America.

The merger signals a significant step in further strengthening the strategic partnership in outer space between Canada and the United States (U.S.), particularly through the national space industries of each country that provide imagery and geospatial intelligence-gathering capabilities.

The two nations have long remained connected through their partnership to defend the peaceful uses of outer space and to utilize the space environment to meet national security priorities. Through aerospace defence organizations, particularly NORAD, the two countries remained steadfast to employing satellites for the purpose of earth imagery and geospatial intelligence-gathering to advance security objectives.

Now, MDA has bridged the divide between the geospatial intelligence technologies and data analysis produced within the U.S. and the access to these technologies by Canadian space enterprises.

This was a product of a long-term process involving consultation with U.S. security and defence agencies. Previously, MDA undertook a major corporate reorganization in May 2016 in accordance with its “U.S. Access Plan” strategy to expand business opportunities with the U.S. Government’s civilian, defense and intelligence agencies in outer space. These agencies included the U.S. National Aeronautics and Space Administration (NASA), Department of Defense (DoD), and the National Geospatial-Intelligence Agency (NGA).

On January 26, 2017, MDA, along with its subsidiary SSL MDA Holdings, Inc., and the DoD executed the signing of a Security Control Agreement granting the company the required security clearances to pursue and execute U.S. Government programs. Several months later, MDA completed its purchase of DigitalGlobe.

Whereas both Canada and the U.S. have recognized imagery and geospatial intelligence as imperative to national space security, both countries now possess an approach to which they can access these services through a common space industry enterprise.

While MDA has already established itself successfully in Canada, it is now positioned to complete more activities in the U.S. It is reasonable to assume that, through the merger, high resolution optical satellite imagery and information provided by DigitalGlobe may become more available to, and may be more likely to be used, by Canada in the future.

For the outside observer, trust is what has formed the basis of U.S. DoD’s decision to allow the recent acquisition by MDA of DigitalGlobe. The confidence that the DoD has placed in the Canadian enterprise has been acquired through years of excellence in producing government and commercial geospatial systems, such as the RADARSAT-1 and RADARSAT-2 missions, for the Canadian and U.S. Governments. What has resulted in a significant link between U.S.-Canada space security relations has only been made possible because of a strong, proven component of Canada’s space industry.

The primary strategic lesson that should be drawn from MDA’s DigitalGlobe acquisition is that space industry can serve as an important bridge between American and Canadian defence and security priorities.

Strengthening the strategic partnership in outer space through imagery and geospatial intelligence and data analysis, especially through their space industries, remains an important aspect of the national space security strategies of both nation. In this respect, MDA has served as the preeminent bridge-builder between Canada and the U.S. in a contemporary space environment.

Contributed by: Kiernan McClelland is a graduate from the Centre for Military, Security and Strategic Studies.