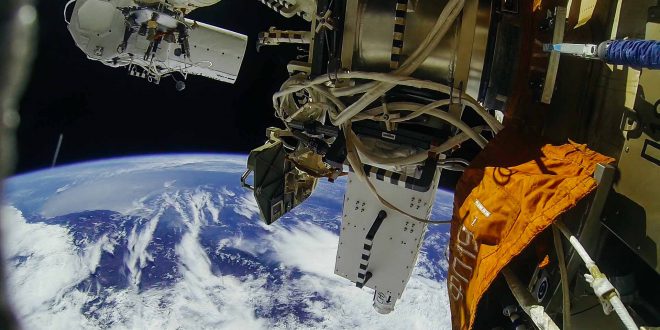 MDA Partners with UrtheCAST To Provide HQ Video From The ISS

MacDonald, Dettwiler and Associates Ltd. has signed a contract for $4.2 million with Earth Video Camera Inc., (operating as UrtheCast), to provide them with information solutions to be incorporated into two high-definition video cameras to be installed on the International Space Station in late 2012.

The HD cameras will stream pictures and constant, near-live video to Earth for potential uses in education, environmental information, disaster monitoring and consumer-generated media. Via the UrtheCast website, users will be able to track the space station, and access video and images of geographic locations that it passes over.

UrtheCast (pronounced “EarthCast”) is a company which was formed primarily to provide the world’s first live HD video feed of Earth from space. They are partnered with Russian Aerospace giant RSC Energia. UrtheCast is building, launching, installing, and operating two cameras on the Russian module of the International Space Station. Video data of Earth collected by the cameras will be down- linked to ground stations around the planet and then displayed in near-realtime on the UrtheCast web platform, or distributed directly to exclusive partners and customers.

Scott Larson, president of UrtheCast stated “We are thrilled to have MDA as part of this project and to be able to add them to a team that already includes RSC Energia, Rutherford Appleton Labs in the UK, and the Russian Federal Space Agency. A project like this is obviously quite involved and complex, and MDA is the right partner. We look forward to working closely with them on a variety of fronts over the duration of this project.”

“A large part of UrtheCast’s vision involves education — a commitment to providing a tool that will allow educators and students to interact with and absorb information about Earth and space. Up until now, this has been impossible: an interactive, ever- changing, near-to-real-time view of our planet,” says Larson.

The two cameras — one medium and one high-resolution — will be installed by astronauts on the Russian portion of the International Space Station in late 2012. Once mounted, the cameras will stream near-live video and static imagery to Earth, and will provide extraordinary opportunities to view Earth in high-definition.

“This powerful platform will be housed in a social, interactive, and open-sourced environment. We are incredibly excited to see what developers and the public will accomplish with this amazing data source,” says Larson.