In a news release today, Jaguar Financial Corporation stated it had entered into an agreement with Maritime Launch Services having executed a binding letter agreement for a “reverse takeover of Jaguar by MLS.”

According to the press release “Jaguar was previously a Canadian merchant bank generally investing in companies Jaguar determines to be undervalued, overlooked and underappreciated. As of the date hereof, Jaguar has ceased to carry on an active business. Jaguar is presently engaged in identifying and evaluating suitable assets or businesses to acquire or merge with, with a view to maximizing value for shareholders.”

Under the terms of the Letter Agreement, the Proposed Transaction is anticipated to be completed by way of a three-cornered amalgamation under the Companies Act (Nova Scotia), whereby a wholly owned subsidiary of Jaguar will amalgamate with MLS. In connection with the Proposed Transaction, Jaguar will reconstitute its board of directors and senior officers to be comprised of the nominees of MLS (the “Board and Management Rotation”), and will change its name to one determined by MLS in its sole discretion (the “Name Change”) and the Resulting Issuer will conduct its business under the new name.

The Letter Agreement includes a number of conditions, including but not limited to, requisite shareholder approvals including the approval of the shareholders of MLS, the completion of the Name Change and the Board and Management Rotation, approvals of all regulatory bodies having jurisdiction in connection with the Proposed Transaction and other closing conditions customary to transactions of the nature of the Proposed Transaction.

Jaguar is a reporting issuer under the securities laws of the Provinces of British Columbia, Alberta, Manitoba, Ontario and Quebec whose common shares (“Jaguar Shares”) were voluntarily de-listed from the NEX board of the TSX Venture Exchange on October 22, 2021. Consequently, Jaguar’s common shares are currently not posted for trading on any marketplace. The Resulting Issuer will apply to list its common shares on the Canadian Securities Exchange (the “CSE”) and, if and upon the satisfaction of the CSE’s initial listing requirements, the common shares of the Resulting Issuer are expected to begin trading on the CSE following the closing of the Proposed Transaction.

Pursuant to the terms of the Letter Agreement, and in connection with the Proposed Transaction:

Board of Directors and Management

The initial board of directors and management will consist of Stephen Matier, Sasha Jacob and François Desjardins. Other directors will be announced at a later date.

Stephen Matier – Director, President and Chief Executive Officer: Stephen Matier, President and CEO of Maritime Launch Services (MLS), is the driving force and visionary behind the development of Canada’s first spaceport, a world-class commercial space complex that will launch Canada into the global space industry from Nova Scotia. Mr. Matier is a mechanical engineer by training, and a certified manager of complex programs. He is a successful entrepreneur and a well-established consultant in the space sector. Mr. Matier is the recipient of the NASA astronaut Silver Snoopy Award, as well as the NASA Manned Flight Awareness Award. With more than 30 years in the industry, Mr. Matier’s experience includes engineering management at the NASA White Sands Test Facility and decades of experience with various US commercial aerospace customers, contractors and launch sites.

Sasha Jacob – Director and Chair: Mr. Jacob is the Chairman and Chief Executive Officer of Jacob Capital Management Inc., a merchant bank focused on the renewable power and infrastructure sectors. Mr. Jacob brings over 20 years of investment banking experience as the first banker to focus on renewable energy in Canada and having managed over 100 transactions valued at more than $10 billion. Mr. Jacob holds a BA from Bishop’s University, MBA from Sir Wilfrid Laurier University and GP LLM from the University of Toronto. He is the previous Vice-Chair of WorldWildLife Fund Canada, Director of Plan International Canada, Chair of Young Presidents’ Organization Maple Leaf Chapter and current Chair of the Board of Nature United.

Sasha Jacobs joined MLS earlier this year and was instrumental in the company getting its first round of funding, $10.5 million in May of this year.

The addition of François Desjardins who has 30 years of experience in the financial services industry will certainly help MLS as it navigates its pending public listing.

SpaceQ has also learned that there will be some significant announcements on Friday, Nov. 19 in Halifax just prior to the opening of the Halifax International Security Forum which MLS is participating in.

Boucher is an entrepreneur, writer, editor & publisher. He is the founder of SpaceQ Media Inc. and CEO and co-founder of SpaceRef Interactive LLC. Boucher has 20+ years working in various roles in the space industry and a total of 30 years as a technology entrepreneur including creating Maple Square, Canada's first internet directory and search engine.
@marckboucher
Previous Telesat looks to augment its Lightspeed constellation with an additional 1373 satellites
Next Dreams of Canadian satellite launcher form company’s support for Launch Canada 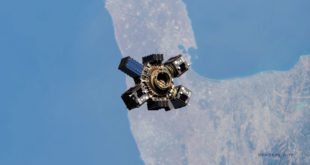