Making the Case for Human Missions to Asteroids

—
By Jeff Foust
When President George W. Bush unveiled the Vision for Space Exploration in January 2004, he outlined a series of destinations for human exploration: a return to the Moon by 2020, followed by expeditions at later, unspecified dates “to Mars and to worlds beyond”. This “Moon, Mars, and beyond” concept made logical sense as a set of stepping stones for human expansion into the solar system, even if the “beyond” part was vague in terms of specific destinations and timetables.
However, when Bush’s successor, President Barack Obama, outlined his own vision for human space exploration in a speech at the Kennedy Space Center (KSC) in April 2010, he upended that approach. Obama still planned to send people to Mars, but with a more clearly defined objective: a crewed mission to orbit, but not land on, Mars in the mid-2030s, with a landing mission to follow some time, presumably soon, thereafter.
A human mission to the Moon as a precursor, though, was no longer a nearer-term goal. “We’ve been there before,” he said of the Moon. Instead, he proposed human missions into deep space by 2025, specifically, “we’ll start by sending astronauts to an asteroid for the first time in history.” While much of the space policy debate over the last two years has focused on the Obama Administration’s separate decision to cancel the Constellation Program, that directive has also been a point of contention. Does it make sense to send humans to an asteroid in lieu of, or at least before, a human return to the Moon?
While the idea of sending humans to asteroids, near Earth or otherwise, isn’t a new one, the inclusion of asteroid missions in the administration’s plan is linked to the work done in 2009 by the Review of U.S. Human Spaceflight Plans Committee, better known as the Augustine Committee after its chairman, retired aerospace executive Norm Augustine. That committee was chartered by the White House to examine the then-current state of NASA’s human exploration plans and offer several options for the future.
One of those options was what it called the “Flexible Path”, which the committee’s final report described as “a steadily advancing, measured, and publicly notable human exploration of space beyond Earth orbit that would build our capability to explore, enable scientific and economic return, and engage the public.” A human mission to an asteroid would actually not be the first mission under the scenario laid out in the report–it would be preceded by human missions to lunar orbit and to Earth-Moon and Earth-Sun Lagrange points–but it would be the first body humans would actually set foot on.
What made the Flexible Path compelling to the Augustine Committee and the administration is that it allowed NASA to stretch out the development of the infrastructure needed for human exploration. Unlike the Moon, missions to asteroids wouldn’t require a separate lander because of the asteroids’ very low gravity. “What this Flexible Path does is it allows us to take some of the components that you would build first anyway, the heavy booster and the capsule, and start exploring while we’re building the lunar landing system and the lunar surface system,” explained Ed Crawley, an MIT professor of aeronautics and astronautics who served on the Augustine Committee.
Just how much infrastructure would be needed for human missions to asteroids is still an area of study and debate. One notional concept examined by NASA’s Human Exploration Framework Team (HEFT) requires the use of three launches of a heavy-lift vehicle like the Space Launch System (SLS) rocket and the development of chemical and solar-electric propulsion systems, as well as a habitation module. One problem with the HEFT’s proposed mission is that it wouldn’t meet the president’s stated goal of a human asteroid mission by 2025: its proposal would instead fly no earlier than 2031.
Others, though, have proposed a more barebones approach to human asteroid missions that could cost less and be performed sooner. Lockheed Martin’s “Plymouth Rock” concept does away with the hab module and propulsion stages. Instead, it uses two launches of Orion spacecraft, one carrying a two-person crew and the other carrying supplies and fitted with a departure stage, on a heavy-lift rocket like the SLS. The two Orions would dock in low Earth orbit, and the departure stage would send them to an asteroid.
Such an approach would minimize the infrastructure needed for human asteroid missions. “This is very much an approach to going to asteroids on the cheap,” said Josh Hopkins of Lockheed Martin, who led development of the Plymouth Rock concept. That approach could make a human asteroid mission feasible as soon as the end of the decade, depending on the development of Orion and SLS as well as the selection of a suitable near-Earth asteroid.

A mission to the Martian moon Deimos. Credit: Lockheed Martin
Developing an affordable technical case for an asteroid mission isn’t sufficient, though: just because you’re able to go somewhere doesn’t necessarily mean that you should. Why spend billions of dollars to send people to asteroids instead of the Moon or other destinations in the solar system–or anywhere at all, for that matter?
Proponents of asteroid missions cite several reasons for human asteroid missions. One is the scientific return promised by studying near Earth asteroids. These bodies are the remnants of the protoplanetary disk from which the Earth and other planets formed, and thus can help scientists understand what the initial conditions of the solar system–and perhaps systems around other stars–were like.
However, science alone is likely not a sufficient rationale for sending people. Robotic missions to asteroids, not to mention telescopic observations from the Earth, have already provided a bounty of information about these bodies. Future missions promise to do even more. NASA’s Origins-Spectral Interpretation-Resource Identification-Security-Regolith Explorer, or OSIRIS-Rex, robotic spacecraft will launch in 2016 to travel to a near-Earth asteroid designated 1999 RQ36, collect samples, and return them to Earth.
Another reason to study asteroids is that they offer not just insights into the origins and history of the solar system, but also can provide resources for future human exploration and settlement of the solar system. “Some asteroids are 20 percent water by weight, and we may be able to refuel our spaceships by extracting that water from the wet asteroids,” said Tom Jones, a former astronaut and planetary scientist who has been a long-time proponent of human missions to near-Earth asteroids. He foresees eventually placing extraction plants on asteroids to mine water and other resources, foregoing the expense of having to launch them from Earth.
A third, and perhaps most important, reason for human asteroid missions is planetary defense: protecting the Earth from collisions with asteroids. That conjures up scenes from sci-fi movies like Armageddon and Deep Impact, but Jones notes the danger of such collisions is very real. “Our very survival as a human species depends on us being able to operate on these bodies and learn how to manipulate them,” he said.
Some argue that both resource extraction and planetary defense don’t explicitly require humans. Robotic spacecraft alone could be used to mine asteroids or even divert them should they threaten the Earth. Robots, though, lack the problem-solving ingenuity of astronauts, said Jones. “With the distances involved, you won’t be able to control things in real-time from the ground,” he said. “So having humans there may be the key.”
Making the case for an asteroid mission does have its challenges. Perhaps the biggest is communicating the mission to the general public. It’s easy for the average citizen to understand a human mission to the Moon, given that everyone is familiar with the Moon and because we’ve already gone there. Describing a mission to an asteroid is more of a challenge, particularly when the specific asteroid that NASA plans to send a mission to hasn’t been identified–and, in fact, may not have even been discovered yet.
In the long run, however, even most proponents of asteroid missions acknowledge that such missions are part of a larger architecture that will include human missions back to the Moon as well. The original Flexible Path concept in the Augustine Committee report acknowledged that lunar missions could be part of the overall architecture, giving humans experience working on a larger planetary surface that could be crucial for later missions to Mars. The Global Exploration Roadmap, an international study of potential options for human exploration of the solar system, includes both lunar and asteroid missions in its two major options that eventually lead to Mars missions; the key difference between the options is whether humans go to an asteroid first and then back to the Moon, or vice versa.
In his speech at KSC, President Obama laid out a set of destinations and deadlines, but said his vision for human spaceflight was more than simply achieving those milestones. “Our goal is the capacity for people to work and learn and operate and live safely beyond the Earth for extended periods of time, ultimately in ways that are more sustainable and even indefinite,” he said. Achieving that goal–which is, in essence, the “spacefaring civilization” that space advocates have long sought–will require the experience and resources gained from sending people to asteroids as well as the Moon and Mars–and beyond.

Boucher is an entrepreneur, writer, editor & publisher. He is the founder of SpaceQ Media Inc. and CEO and co-founder of SpaceRef Interactive LLC. Boucher has 20+ years working in various roles in the space industry and a total of 30 years as a technology entrepreneur including creating Maple Square, Canada's first internet directory and search engine.
@marckboucher
Previous Aerospace Review Executive Director to Speak at Canadian Space Commerce Association Meeting
Next Interview With Alex Janas, Goddard Robot Operator 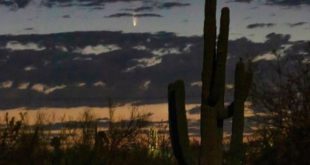