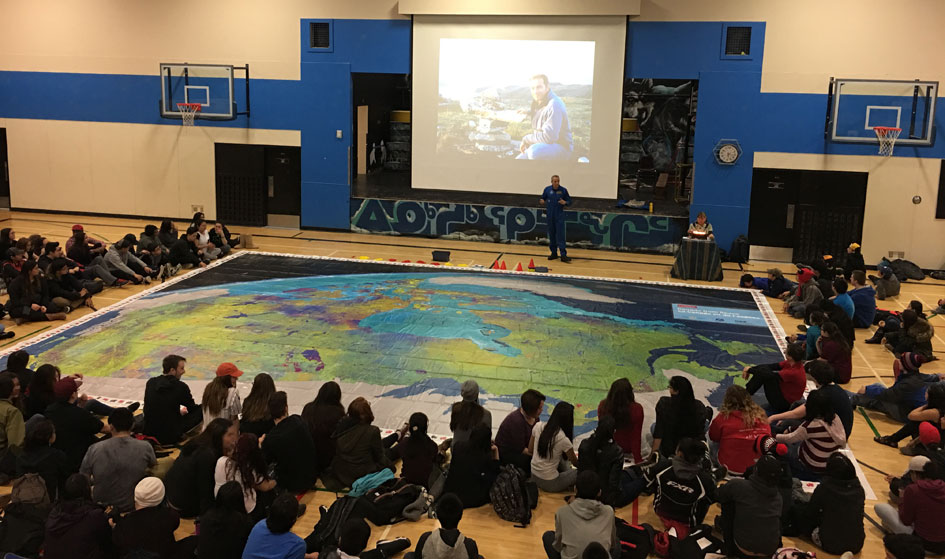 Canadian Space Agency (CSA) astronaut David Saint-Jacques returned from Russia where he has been undergoing training for his upcoming mission to the International Space Station to present Inuksuk High School with a Canada from Space giant floor map and a new educational activity designed for northern communities.

Inuksuk High School is located in Iqaluit, Nunavut with a student population of 410 from grades 9 through 12.
The high school is just the first in the north to participate in this new activity. The map and activities will tour Nunavut, Nunavik and Nunatsiavut in the coming months before moving on to the Northwest Territories and Yukon in 2017.

The Canada from Space giant floor map is a mosaic of 121 images of Canada taken from space by Canada’s Radarsat-2 satellite.

Giant Floor Map – CSACanadian Space Agency astronaut David Saint-Jacques was at Inukshuk High School in Iqaluit this morning. He presented students with a giant map that shows Canada from Space. The map will tour Inuit communities across Nunavut, Nunavik and Nunatsiavut for the next three years. It is part of the Canada 150 celebrations to mark 150 years of Confederation in 2017.

The Honourable Navdeep Bains said of the program “through activities like the Canada from Space initiative, we hope to spark young Canadians’ interest in pursuing studies and careers in science, technology, engineering and math. Through this activity, we are combining the uniqueness of the Northern identity and the subject of space to inspire the young people of Canada’s North to become our next generation of engineers, scientists and astronauts.”

The Canada from Space giant floor map northern educational activity is a collaboration between the CSA, the Royal Canadian Geographical Society, Inuit Tapiriit Kanatami and teachers from northern communities.

Boucher is an entrepreneur, writer, editor & publisher. He is the founder of SpaceQ Media Inc. and CEO and co-founder of SpaceRef Interactive LLC. Boucher has 20+ years working in various roles in the space industry and a total of 30 years as a technology entrepreneur including creating Maple Square, Canada's first internet directory and search engine.
@marckboucher
Previous Innovation, Collaboration, Workforce Change Highlight Laporte's First Head of Agencies Panel at the 67th International Astronautical Congress
Next University of Calgary Researchers Partner with the Canadian Space Agency on ISS Health Experiment