A House of Commons e-petition in support of Canada’s space sector has gained enough signatures that the government will have to respond to it.

The e-petition was started by Prospectus Associates, the company paid to manage the Don’t Let Go Canada Coalition campaign.

We, the undersigned, members of Canada’s space sector, call upon the Government of Canada to develop a new space strategy that will secure Canada’s place in space and fully fund that strategy in Budget 2019.

Currently at publication time there were 5,304 signatures to the petition which is over the 500 threshold needed for the government to respond.

As the diagram below illustrates the path to creating an e-petition and having it tabled in parliament isn’t difficult. The petition is largely symbolic. In the U.K. if a petition receives 100,000 signatures it will be debated in parliament. That is not the case in Canada. 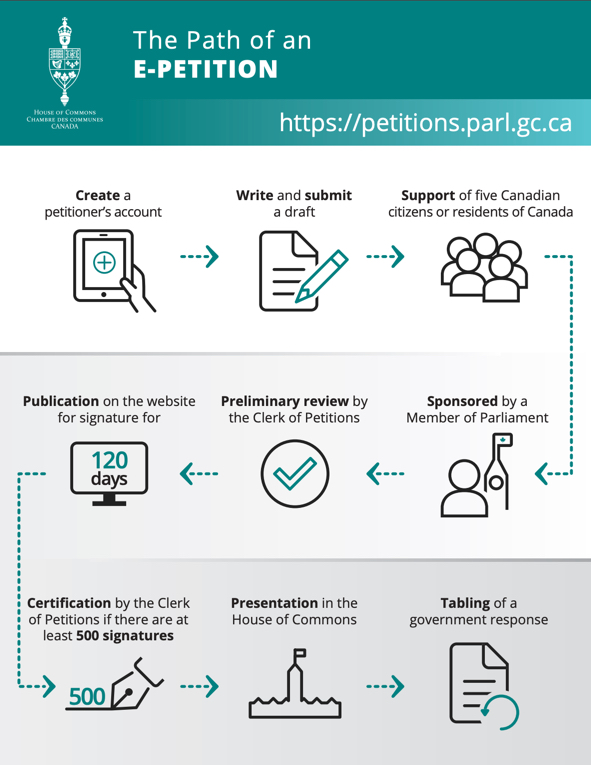 Bryan May, the Liberal MP from Cambridge, Ontario sponsored the petition. This should not come as surprise as the Cambride-Kitchener-Waterloo area is home to several space companies including Honeywell (formerly COM DEV), exactEarth, Canadensys, SkyWatch and others.

The petition has been online just for over two weeks and will continue until April 2, 2019. At that point it will be certified by the Clerk of Petitions, presented to the House of Commons and the government has 45 days to respond. That response will be mailed to everyone who signed it. The response, usually a two page letter, will also be publicly available on the House of Commons website.

Unfortunately the petition was likely started too late for the government to actually pay attention to it before the next budget is tabled and as I stated previously, this exercise is largely symbolic. However, symbolic value can be substantial if the petition goes viral and gets a lot of signatures.

Of the current 60 open petitions on the House of Commons website the highest total at the moment is a petition on immigration with 61,453 signatures. The Space Exploration petition currently stands tenth. As well, of the 318 total e-petitions that have been certified since the new system came into being, only one has ever garnered over 100,000 signatures. That was for the electoral systems which had 130,452 signatures.

I would put it out there that if the petition garners 100,000 signatures it will become mainstream news and could be make it to Question Period. Such an event would be very helpful to the space community.  It largely rests now on a cross-Canada grassroots movement to make something like that happen. Such a movement would require the extensive use of social media such as Facebook, Twitter, YouTube, along with blog posts and the use of podcasts etc. It will be interesting to see how many signatures the petition can get. The clock is ticking.

Boucher is an entrepreneur, writer, editor & publisher. He is the founder of SpaceQ Media Inc. and CEO and co-founder of SpaceRef Interactive LLC. Boucher has 20+ years working in various roles in the space industry and a total of 30 years as a technology entrepreneur including creating Maple Square, Canada's first internet directory and search engine.
@marckboucher
Previous The Department of National Defence Awards $6.7 Million to Eight Companies for ISR
Next International Space Station Crew Down to Three

Opportunities for Canada’s Space Program: The Importance of Space Policy