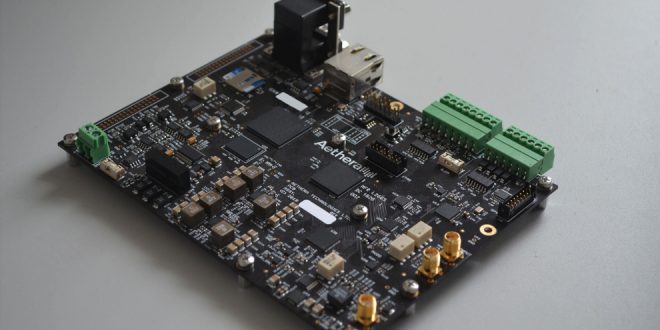 Ad Astra Rocket Company is a Houston based company developing the VASIMR propulsion engine. Aethera Technologies Ltd. of Halifax is working with Ad Astra to develop the new RF PPU.

Ad Astra describes VASIMIR as follows; “Variable Specific Impulse Magnetoplasma Rocket, VASIMR, works with plasma, an electrically charged gas that can be heated to extreme temperatures and controlled and guided by strong magnetic fields, which also provide insulation. Plasma rockets, such as VASIMR, have an extremely low fuel consumption and much higher performance as compared with conventional chemical propulsion or other electric rockets.”

According to the press release the RF PPU “unit completed these tests on August 12 by operating in a thermal steady-state with no anomalies at its full power rating of 120 kW. The RF PPU is now ready to be incorporated into Ad Astra’s vacuum facility so that it can be tested with the VX200SS VASIMR prototype. These tests are part of Ad Astra’s ongoing program under the NASA NextSTEP partnership contract.”

“The development of the RF PPU is being supported by Ad Astra Rocket Company, and The Canadian Space Agency (CSA). CSA’s support is part of a contribution agreement under the Space Technology and Development Program (STDP) announced by the CSA on May 25, 2018. The CSA funding contribution highlights Canada’s long-term view regarding the importance of high-power electric propulsion in humanity’s gradual evolution beyond low Earth orbit (LEO) and gives the project an added international flavor.”

Dr. Franklin R. Chang Díaz, CEO of Ad-Astra Rocket Company said “we are extremely pleased with the results of these tests. The Aethera and Ad Astra teams have worked very hard and very well together to achieve this important milestone, and we look forward to the road ahead with excitement and optimism.”

Tim Hardy, Chief Technology Officer at Aethera said “we are extremely pleased to be a part of the VASIMR team and to have the opportunity to develop state-of-the-art equipment for the space industry. The new RF PPU full power testing is an extremely positive result on the way to achieving a flight qualified rocket.”

Boucher is an entrepreneur, writer, editor & publisher. He is the founder of SpaceQ Media Inc. and CEO and co-founder of SpaceRef Interactive LLC. Boucher has 20+ years working in various roles in the space industry and a total of 30 years as a technology entrepreneur including creating Maple Square, Canada's first internet directory and search engine.
@marckboucher
Previous GHGSat Gets $3.3 Million Funding from Government Sustainable Development Fund
Next The Human System for Deep Space Exploration – Summer Series Podcast