Last Wednesday, the University of New Brunswick was the place to be where for the national Science Fair and where the two winners of the Little Inventors: Inventions for Space contest were announced.

While only two winners could be selected, the reality is that all the participants are winners. Not just in this contest, but for all of the extensive educational and public outreach efforts that have been ongoing during David Saint-Jacques six month mission aboard the International Space Station. Thousands of children have had the opportunity to participate and learn more about science and Canada’s space program.

This contest, Little Inventors: Inventions for Space, had over 3,000 entries of which 250 were selected shortlisted and 30 were actually made by adult makers and artists.

Connor Brown, age 12 of Acton, Ontario was one of the winners with the concept “Space Boot Prints.” The invention is described as; “Most boots have the same zig-zag pattern on the sole, but with this invention, astronauts can see their designed boot imprints on the Moon!” The judges said “this invention feels particularly relevant as we get ready to celebrate 50 years since the first Moon landing and as Canada will take part in the future exploration of the Moon. This invention may inspire the boots of astronauts going back to the Moon!”

The second winner was Amy Claerhout, age 13 of Beaumont, Alberta with her concept for a “Personal Canadarm.” The invention is described as “a mini version of a Canadarm that can be attached to a wall. It contains all the items needed for personal hygiene. Just like a Swiss army knife, everything is built into the Canadarm to help astronauts take care of their personal grooming without having things float out of reach.” The judges said “this invention shows a real understanding of the challenges of living in space. It is a perfect way to pay homage to the amazing technology of the Canadarm while bringing it to a more daily scale!”

Léa Ducharme, a mechanical engineer, was the adult maker who built the concept.

The announcement was broadcast by the Canadian Space Agency. A replay of the event is available below.

Boucher is an entrepreneur, writer, editor & publisher. He is the founder of SpaceQ Media Inc. and CEO and co-founder of SpaceRef Interactive LLC. Boucher has 20+ years working in various roles in the space industry and a total of 30 years as a technology entrepreneur including creating Maple Square, Canada's first internet directory and search engine.
@marckboucher
Previous Transporting the RADARSAT Constellation Mission to the Launch Site is Not as Easy as You Might Think
Next Canadian Ideas Wanted Now for the Beginning of Renewed Moon Exploration Era 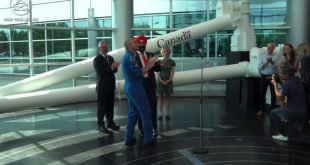