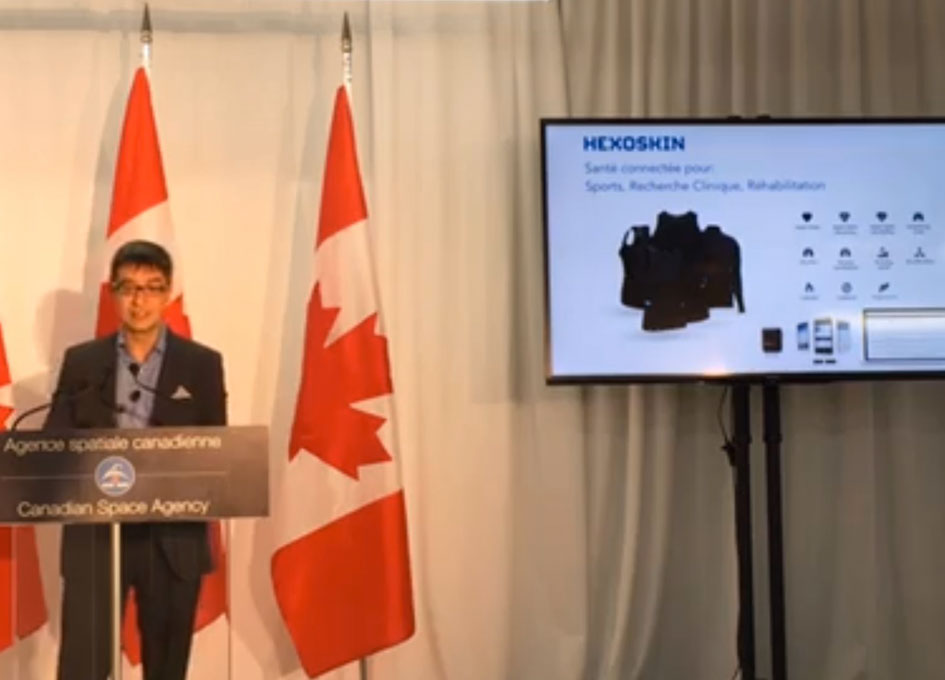 Today the Canadian Space Agency awarded Carré Technologies of Montreal a contract worth as much as $2.4 million over 18 months to continue work on Astroskin, a bio-monitoring system which Canadian astronaut David Saint-Jacques will use on his six month mission aboard the International Space Station (ISS).

The funding is the latest in a series of contracts to Carré Technologies since 2014 and to date have totalled $1.86 million.

David Saint-Jacques is no stranger to the Astroskin “smart shirt” having previously used a version during his regular exercise routine.

Astroskin’s commercial spinoff is already available to the public under the brand Hexoskin and can purchased at Best Buy and other retailers.

However, while Hexoskin is currently being marketed for athletes, this new contract will allow further research and development of Astroskin which could lead to new terrestrial technologies for medical and research activities requiring continuous health monitoring using an integrated suite of biosensors.

The Honourable Marc Garneau, Minister of Transport who made the funding announcement at Carré Technologies office said “Astroskin may have many applications on Earth, such as medical monitoring of those confined to their homes by illness, people living in remote areas with limited medical access, and those working in hazardous environments. It is another in a long list of space technologies brought down to Earth for all of us.”

Pierre-Alexandre Fournier, CEO and co-founder who introduced Astroskin to the media today said “Our team is proud of the role we are playing to support human space travel. One day, thousands of space travelers bound for Mars will need simple reliable medical systems to ensure their health. Deploying our wearable sensors and software to the ISS is significant as this represents the ultimate remote patient monitoring scenario. The findings from tracking the health of astronauts will be used to make our healthcare system more accessible and support new home care and telemedicine services.”

Related: XPAntarctik to Test Astroskin for the Canadian Space Agency

Boucher is an entrepreneur, writer, editor & publisher. He is the founder of SpaceQ Media Inc. and CEO and co-founder of SpaceRef Interactive LLC. Boucher has 20+ years working in various roles in the space industry and a total of 30 years as a technology entrepreneur including creating Maple Square, Canada's first internet directory and search engine.
@marckboucher
Previous Wanted: A Few Good Space Advisors
Next Hello world!