The Canadian Space Agency (CSA) released it’s 2008 State of the Canadian Space Sector report today which was prepared by its Policy and External Relations Directorate. According to the report the Canadian space sector employed 6,742 people in 2008 with increasing revenues to $2.79 billion which is a 17.8% increase over the previous year.

After a three consecutive years of a decline the Canadian space workforce increased by 4%. 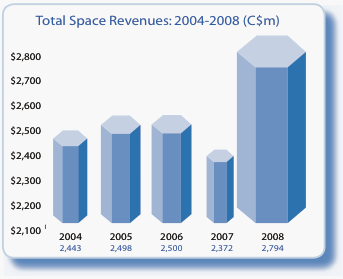 Of the space categories surveyed, results indicate growth in all except Space Research. Space Segment revenues increased to $508 million, as well as Ground Segment which reached $335 million. Applications and Services continued to grow, reaching just under $2 billion, and Space Research fell to $24 million.

Boucher is an entrepreneur, writer, editor & publisher. He is the founder of SpaceQ Media Inc. and CEO and co-founder of SpaceRef Interactive LLC. Boucher has 20 years working in various roles in the space industry and a total of 30 years as a technology entrepreneur including creating Maple Square, Canada's first internet directory and search engine.
@marckboucher
Previous Who Knew? Canadian Space Agency Space Exploration Advisory Committee Meets
Next Remembrance Day Thoughts from Space by Canadian Astronaut Robert Thirsk