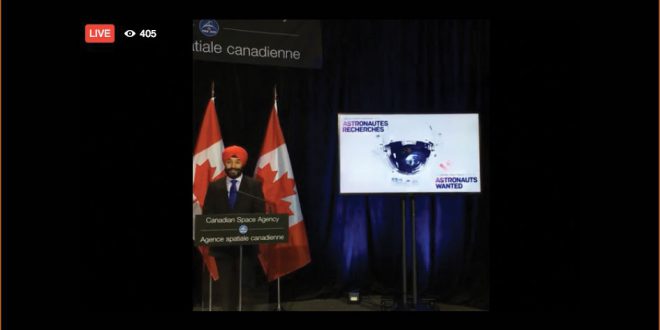 Today the Honourable Navdeep Bains, Minister of Innovation, Science and Economic Development announced that the Canadian Space Agency was once again looking for astronauts, the first call for astronauts since 2008. SpaceRef first reported this yesterday as the likely announcement.

Candidates can apply staring today until August 15th and two people will be selected by the summer of 2017.

In his remarks which Minister Bains said, “our astronauts have been a source of national pride for our country. If you have aspired to go beyond our planet’s frontier, now is your chance to make this dream a reality. This class of Canadian astronauts will be part of a new generation of explorers to advance critical science and research aboard the International Space Station. Just like the astronauts before them, they will inspire young Canadians to view science and technology as accessible and interesting tools they can use to build their own adventures.”

The Canadian Space Agency has created a new information website with an online application page. The website address is: www.asc-csa.gc.ca/astronauts/

This announcement is a positive sign for Canada’s space program. It shows a commitment to sending Canadian astronauts to space and could mean missions beyond the International Space Station (ISS). Most of the partners in the ISS have committed to keeping the station going to 2024 but beyond that it’s unlikely the partners will commite to keep the ISS in use. Since these two new astronauts won’t start training until mid-2017 they probably won’t fly until 2022 unless Canada makes a significant investment in the ISS.

For those people applying now they could be the first Canadians to venture beyond low earth orbit and the ISS, to perhaps the moon and possibly Mars. Isn’t that an exciting prospect?

We are live for an important announcement on the future of the Canadian astronaut program!

Boucher is an entrepreneur, writer, editor & publisher. He is the founder of SpaceQ Media Inc. and CEO and co-founder of SpaceRef Interactive LLC. Boucher has 20+ years working in various roles in the space industry and a total of 30 years as a technology entrepreneur including creating Maple Square, Canada's first internet directory and search engine.
@marckboucher
Previous National Defence Minister to Make Space-based Surveillance Announcement at MDA Headquarters
Next National Defence Awards MDA Polar Epsilon 2 Contract