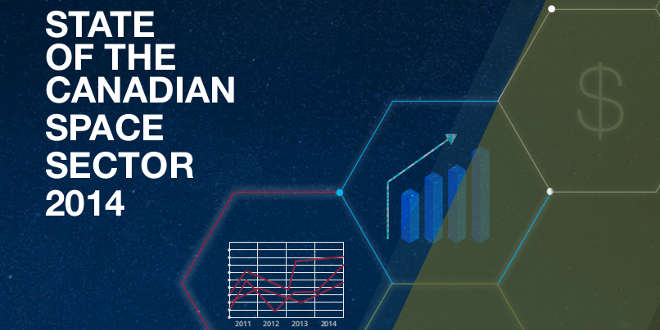 While this may seem like a significant increase, it is in fact a 2% year over year growth rate. The reason for the significant jump in revenue is a new methodology used by the CSA which added new downstream segment organizations and their revenues to the survey.

One significant note on the data, Earth Observation (EO) saw a 39% growth in revenue from 2013 to 2014. The EO trend in growth and revenue should continue.

The report and data needs to be prefaced by how the Upstream and Downstream segments are defined.

The CSA defines the Downstream segment as “the effort required for the day-to-day operation of space assets, manufacturing of products and software applications that transform space data and signals into useful end products, and services provided to end-users.”

The “report uses a new methodology developed by the Organisation for Economic Co-operation and Development’s Space Forum, of which the CSA is a participating member, to characterize Canadian space activities on the basis of a value-chain approach. The definitions of space sector categories have been updated, and report findings are presented on the basis of upstream and downstream segment activities. This re-categorization is intended to improve the measurement of the space sector and enable international comparisons.”

In the President’s message Sylvain Laporte said “The 2014 survey results indicate that the space sector has achieved revenues of $5.4B and a workforce of over 10,000. Upstream segment activities related to research, engineering and manufacturing account for $1B. Downstream segment operations, products and services account for $4.4B, with Satellite Communication dominating the downstream segment. Domestic, and particularly commercial, sales emerged as the most important area for growth in 2014. At the same time, export markets experienced some contraction. Overall, the space sector contributed $2.9B to gross domestic product (GDP) and helped maintain 25,000 jobs (direct, indirect and induced) in the wider Canadian economy.”

Boucher is an entrepreneur, writer, editor & publisher. He is the founder of SpaceQ Media Inc. and CEO and co-founder of SpaceRef Interactive LLC. Boucher has 20+ years working in various roles in the space industry and a total of 30 years as a technology entrepreneur including creating Maple Square, Canada's first internet directory and search engine.
@marckboucher
Previous What the Space Community Can Expect in Budget 2017
Next Exclusive: Maritime Launch Services Selects Nova Scotia Site for Spaceport Over 13 Other Locations