Futron has released its 2012 Space Competitiveness Index marking the 5th anniversary of the yearly publication. According to the report and for the third year in a row Canada continues to decline in the space competitiveness index though it remains ranked seventh overall. The report says that while Canada retains a skilled space workforce, delays in outlining and implementing a new space policy are “significantly” offsetting any competitive advantages.

The annual index measures over 50 metrics which are divided into three dimensions; government, human capital and industry.
On the government side the report said while Canada’s civil budget increased substantially from the government initiated stimulus in 2010, the “benefits of this new investment may not be sustained following a projected drop-off in spending during the next budget cycle.”
In human capital Canada ranked highly due to the large number of university aerospace programs and research centres.
On the industry side “fewer major Canadian space deals were observed in 2011 versus 2010 — but their transaction values were higher.”
Canada’s ranking does not take into account the recent MacDonald, Dettwiler and Associates Ltd. (MDA) announced acquisition of Space Systems/Loral.
New to the index this year are emerging space nations Argentina, Australia, Iran, South Africa and the Ukraine.
Four distinct tiers have emerged. The first tier has the U.S., Europe, and Russia. The second tier China, Japan, India, and Canada. The third tier South Korea, Israel, and Brazil. And the fourth tier Argentina, Australia, Iran, South Africa and the Ukraine.
Futron says the top two tiers remain dynamic but have shown some stabilization while the bottom two tiers are subject to intense competition, with very small gaps in the competitive rankings. 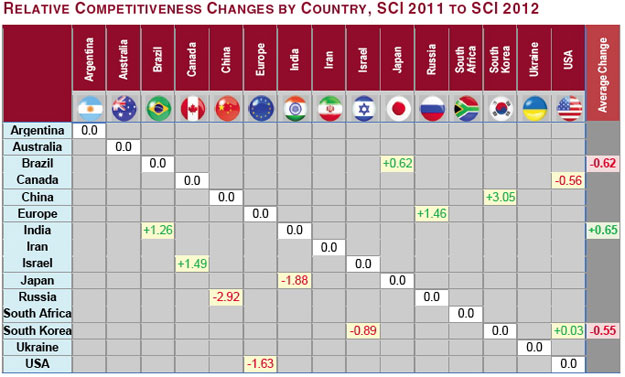 China gained the most competitiveness basis points in 2012, followed by Europe, India, and Israel. Japan lost the most basis points, followed by Canada, South Korea, and the United States. When compared against the larger group of 15 nations, Brazil falls to 11th place, just below Australia.
As has been noted before International collaboration is increasingly taking shape as a concerted space competitiveness strategy, especially among smaller actors.
Here’s a list of some of the findings by country:
– Argentina is adapting its satellite manufacturing sector for the international marketplace, exploring both commercial and government-to-government deals. It stands to benefit from increased investment in spacecraft subcomponents.
– After more than a decade of dormancy, Australia is back. The government is refreshing its national space policy segment-by-segment, focusing on space not only a driver of innovation and expertise, but also for its benefits to Australian society.
– Brazil has begun to re-examine its national space priorities, increased funding, expanded its partnerships, and laid plans for a new launch vehicle. It remains to be seen whether these steps will keep Brazil ahead of regional counterparts that are also emerging onto the space scene.
– China performed a record number of launches in 2012, surpassing the United States for the first time, while increasing investment in technical education programs and civilian research institutes.
– Europe’s integrated approach is complemented by the rise of new national space agencies across the continent–from the United Kingdom to the Czech Republic to Estonia–as well as more assertive space export financing.

– India is enhancing its space-related technical education, while gradually progressing toward a completely self-reliant set of next generation launch vehicles.
– Iran has made faster progress than any other newly emergent space nation. The tenor of Iran’s space program–civilian or military–will hinge on geopolitics. Other international actors have substantial power to influence the future focus of the Iranian space program.
– Israel, despite funding increases, remains challenged by its lack of domestic industry scale, and has difficulty sustaining a commercial space presence in global markets.
– Japan, despite ongoing benefits from its policy reforms, is losing competitive ground relative to most other actors, and can benefit from a greater focus on commercializing its industrial base.
– Russia’s remains the world’s launch leader, and promises to retain that role in the near term thanks to its vital role in transporting astronauts and cargo to the International Space Station, as well as the introduction of Soyuz launches from the European spaceport at Kourou. These strengths, however, are offset by weaknesses in retention of human capital talent.
– South Africa is divided, from a budgetary standpoint, between space investments focused on societal usage of external assets already in space and investments focused on building the country’s own space industrial base.
– South Korea’s two failed launch attempts contributed to an organizational shakeup, but have not reduced its determination to become the newest country to achieve independent spaceflight.
– Ukraine has an enviable space industrial base, but limited domestic demand for its space hardware. It is aggressively seeking partners overseas, but has not yet engaged with key emerging markets.
– The United States remains the overall leader in space competitiveness, but its relative position has declined for the fifth straight year, as other countries enhance their capabilities while the U.S. undergoes major transitions amid significant uncertainty.
– Download the Executive Summary.
– More information and full report. 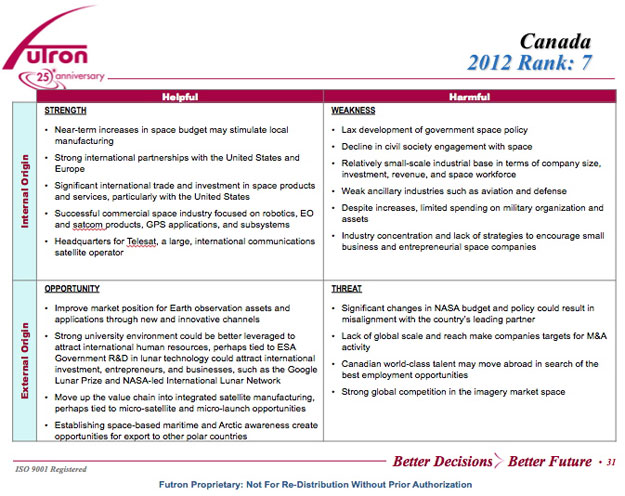 Boucher is an entrepreneur, writer, editor & publisher. He is the founder of SpaceQ Media Inc. and CEO and co-founder of SpaceRef Interactive LLC. Boucher has 20+ years working in various roles in the space industry and a total of 30 years as a technology entrepreneur including creating Maple Square, Canada's first internet directory and search engine.
@marckboucher
Previous Canadian Scientists Share Their Thoughts as the Curiosity Rover is Set to Land on Mars
Next DND Wants Arctic Surveillance Network