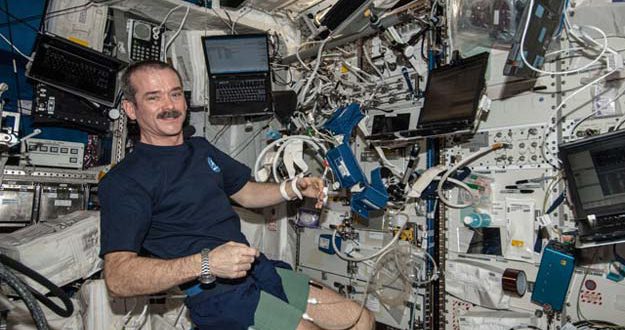 Today marks the end of one of Canada’s astronauts greatest achievements, but also marks the beginning of a long hiatus for Canadian astronauts in space.

At 10:31 p.m. EST tonight, Chris Hadfield should be landing in a Soyuz capsule on the Kazakh steppe marking the end of a remarkable journey which showcased his skill as the first Canadian commander of the International Space Station.

But as outlined in a Canadian Press article, no Canadian will visit the International Space Station until at least 2016 and possibly as late as 2019. That’s a wait of 3-6 years.
The reason? Canada doesn’t have enough credits earned to have another astronaut sent to the space station.

From the Canadian Press article:

Leclerc noted that Canada collects “credits” based on its contributions to the development of the space station, with the credits traded in for trips by astronauts.

“The ISS is a big co-operative,” he said. “You get in return what you put into the program and right now we still have some credits left, but we have to accumulate these credits.”
Currently the only way to send astronauts to the space station is via the Russian Soyuz spacecraft.

And as the Americans have learned that is an expensive endeavour.

Canada had been in negotiations with the Russians to potentially buy a seat or two. However at these current prices the government appears unwilling to spend the money.

The Canadian Space Agency budget is shrinking and one Soyuz ride to space would account for almost 1/4 of the agencies meagre budget.

The next Canadian in space might not even be a Canadian Space Agency astronaut. It might be an Astronaut for Hire, Erik Seedhouse, who would paid to perform suborbital experiments on the private XCOR Lynx spacecraft when it starts commercial operations in a few years.

As well, Canada might never buy a seat on a Soyuz. Commercial competition is underway in the U.S. with SpaceX potentially being the first to send astronauts to the space station as soon as 2016. A seat on a SpaceX Dragon will be significantly cheaper than a Soyuz seat.

Regardless which Canadian goes into space next, it appears they’ll be flying commercial.
Live coverage of the Chris Hadfield’s return from space starts at 9:15 p.m. ET on SpaceRef.

Boucher is an entrepreneur, writer, editor & publisher. He is the founder of SpaceQ Media Inc. and CEO and co-founder of SpaceRef Interactive LLC. Boucher has 20+ years working in various roles in the space industry and a total of 30 years as a technology entrepreneur including creating Maple Square, Canada's first internet directory and search engine.
@marckboucher
Previous RADARSAT-1 Mission Officially Declared Non-Operational
Next Chris Hadfield Space Oddity Music Video