It’s still hard to spot the Canadarm among the warplanes at the Canada Aviation and Space Museum (CASM), but director-general Chris Kitzan says this will change shortly.

After two years heading Ottawa’s chief space exhibit, Kitzan has declared 2018 “the year of space”. Several new exhibits are planned to support that mandate, along with frequent space programming for the museum’s core audience of young children. This includes expanding and reorganizing the museum’s current floor space devoted to the cosmos.

“When I took this job, the first thing I was told was to expand the space mandate. But it took some time to get embedded into the community,” Kitzan told SpaceQ. Now that he has had several meetings with an informal network of 20 space partners, the momentum for emphasizing space is growing, he said.

The museum is considering purchasing a Russian Soyuz spacecraft that will be used for a near-future mission, which would be a coup as little Russian space technology is displayed outside of that country. There is a precedent, however, as in 2016 Britain’s Science Museum acquired the Soyuz that carried its astronaut, Tim Peake, to orbit in 2015. CASM did not disclose the cost of this potential acquisition, or which Soyuz it would pursue, but this would likely be the spacecraft that is carrying David Saint-Jacques to the International Space Station on Dec. 20.

Then there’s a temporary exhibition opening on Saturday (May 5). “Beyond Planet Earth: The Future of Space Exploration” will run until Sept. 4 in the museum’s temporary exhibit space at the right-hand side of the museum, on the opposite wall from the permanent space collections. It is a travelling exhibit from the American Museum of Natural History in New York City.

SpaceQ took an exclusive preview tour of the exhibition and saw artifacts ranging from Russian spacesuit parts to a Martian meteorite to old science fiction books, as well as a diorama of a future potential lunar base in Shackleton Crater. The centerpiece is a full-scale mock Mars Curiosity rover, and several interactives for children that simulate Mars landings or the experience of being an astronaut. The museum expects 135,000 visitors over the summer, but said it isn’t clear yet how many will go into the temporary exhibition space.

Sometime later in 2018 at a time closer to Saint-Jacques’ launch, CASM will also open an exhibit that focuses on health and medicine in space. This is a Canadian Space Agency-supported group of objects that will be placed on the upper floor of the museum, above a permanent museum exhibition of International Space Station artifacts that is to the left of the entrance.

There also is a new space-themed exhibit already on display. Third-year Algonquin College students support a weekend virtual reality space lab where elementary school students can participate in a simulated Mars mission, learning science concepts as they go. This initiative started in January, after a four-month delay due to an Ontario college faculty strike that affected 24 colleges across the province, including Algonquin. This lab is just beside the Canadarm and the permanent space exhibit.

It’s been eight years since the aviation museum’s name was changed to include space, but the shift to include space artifacts took some time. That’s in part because most of the space stuff was housed at a sister museum. The aviation museum was founded in 1960 with a focus on airplanes, while a sister museum – the Canada Science and Technology Museum (CSTM), which today is a 15-minute drive away – opened in 1967 with exhibits including some artifacts for space exploration.

CSTM opened a permanent space exhibit in June 1992 shortly after the flight of Roberta Bondar, the first female Canadian in space. This included a mock shuttle payload bay, models of the Sputnik spacecraft and Black Brant sounding rocket, and (until 2004) the Apollo 7 spacecraft on loan from the Smithsonian National Air and Space Museum. The exhibit remained open until 2014, when the museum closed suddenly due to asbestos problems and other urgent issues that required renovation.

Around the time CSTM closed for renovations between 2014 and 2018, Ottawa’s aviation museum expanded its space exhibits. It hosted a “Star Wars” travelling exhibit in 2013, and a “Star Trek”-themed one in 2016. Real space hardware also arrived. A real Canadarm was installed in a small glass case in 2015, in the same year that the permanent exhibition “Life In Orbit: The International Space Station” opened.

We have one of the best aviation collections in the world,” Kitzan said, but added there is an extra challenge to acquiring space equipment. Besides the inherent obstacles of cost and display space, much of the Canadian space hardware still is owned by NASA. This means the Smithsonian Institution (under its agreement with NASA) usually get first shot at acquiring historical space artifacts.

When asked why space is the focus in 2018, Kitzan pointed to the launch of Canadian astronaut David Saint-Jacques Dec. 20 as one of the reasons. But there is also a shifting emphasis on Canadian space in government, he argued. The establishment of a space advisory board and discussions of a new strategy for the Canadian Space Agency are some of the reasons.

Also, Kitzan said he is slowly building up relationships with large commercial players in the Canadian space industry, including MDA, Magellan, and CAE Inc., as well as academic institutions such as Algonquin College. So far, the meetings have been about exchanging expertise rather than funds, he added. But the eventual goal is to leverage these relationships into a virtual campus where Canadian space technology and goals will be at the forefront of an education-focused experience for students. The Algonquin VR lab is a taste of that idea, he said.

The museum is also trying to act as a facilitator for different entities in its network to meet and learn from each other; for example, Algonquin students could take a tour of CAE to enhance their educational experience. “That’s where the museum should situate itself,” Kitzan said.

Kitzan added that while it would be nice to have a physical expansion to the museum, he acknowledged there have been a lot of government infrastructure investments at the sister CSTM and resources may not be available yet. The sister museum underwent an $80.5 million overhaul starting in 2014 to update its aging facility, including a new roof, a new facade, and retrofitting the building to meet current code, according to the CBC. It also received $156 million in 2016 (over three years) for a new storage building.

I (Elizabeth Howell) am a lifelong resident of Ottawa who has visited both of these museums since childhood. As a child, I was fortunate to attend the opening of the CSTM space exhibit in 1992. My family made occasional visits to both facilities, which was meaningful for us as both my father (retired from Transport Canada) and paternal grandfather (retired from Royal Canadian Air Force) have aviation backgrounds. So I have strong memories attached with both museums.

The aviation museum (from what I remember of childhood) appeared small and crowded. I didn’t visit it for several years in adulthood until after an expansion in 2011. The new floor space added an auditorium and three classrooms that opened up the front, and allowed some room to breathe. I go a few times a year now for space events. I find the floor is still a little crowded, but storing airplanes in general is difficult due to their large size. The Dulles International Airport (Udvar-Hazy) branch of the Smithsonian National Air and Space Museum has a similar pods of bunched-up aircraft, but on a larger scale.

The permanent space exhibits are not obvious to a person entering the museum, as they are mostly located along the left-hand wall and towards the back of the building. That said, they are all grouped in one area, and the zone is getting more visible by the year. The nearby VR lab (due to its interactivity) will likely bring in more visitors to that side of the museum on weekends, which is the busiest time for visitors. And as mentioned before, there will be a new exhibit opening there in late December. While it is on another floor, this may bring more foot traffic into the space area.

Space fans should also be aware that the museum has a space shuttle equipment pallet (which was used in part ) and a tire (from STS-96 in 1999, which included Canadian astronaut Julie Payette) on display in the collections building next door. The next opportunity for the public to view them is during , between June 2 and June 3. It’s a very small display in a huge area, but still worth a look.

It was worth revisiting the museum to see the new travelling exhibit, “Beyond Planet Earth”. As a science fiction fan, I felt one of its strengths was using references from science fiction to relate to our understanding of current space travel. You can see mentions of everything from “War of the Worlds” to “Deep Impact.” The little space artifacts are also fun to look at. A caveat is those with very small children likely won’t have much time to admire the information and artifacts, as the children will rush right by to play with the interactives. The space is also a little small, so try to visit in off-peak hours to get the most out of the experience.

Is SpaceQ's Associate Editor as well as a business and science reporter, researcher and consultant. She recently received her Ph.D. from the University of North Dakota and is communications Instructor instructor at Algonquin College.
Previous Canada Needs a National Space Act and Global Space Law Progress
Next Canada to Launch 15 University Built Satellites by 2020 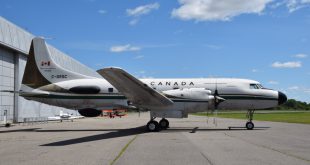 How a Convair 580 Airplane Led to the RADARSAT Constellation Mission 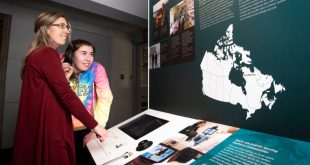